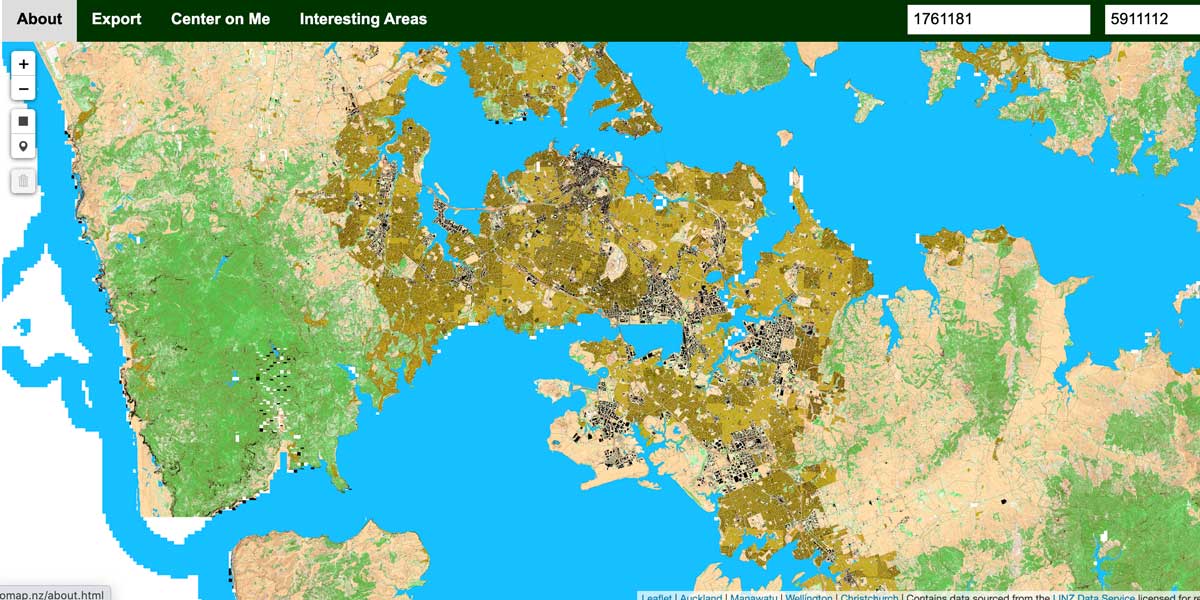 Summary: We present a “lockdown project” – Cam de L’Isle’s “O-Map of New Zealand”. We discuss the powers and the limitations of Lidar data. We advise ongoing change to the sprint specification. And a Facebook group for NZ mappers.

The first section is non-technical. If you’re not a mapper just read as far as you can manage.

Aside – The word LiDAR is supposed to have a small “i” but it’s too easy to forget. If you’ll excuse us we’ll just spell it “Lidar”, it will soon be in the dictionary. ☺️

The NZ Omap Project was an idea had during lockdown to utilise increasing amounts of Lidar data available in NZ to create a giant orienteering map of New Zealand. Currently we have access to data covering around 20% of New Zealand, with large new areas currently being captured by most councils across the country. The map is being generated using the Karttapullautin software developed by Jarkko Ryyppo in Finland, with data bundled up into 20x20km areas and distributed to a network of orienteers who have offered their PCs for processing. Tracks, roads, buildings and selected other features have also been added using data from OpenStreetMap which results in a highly usable, auto-generated orienteering map.

Contours and vegetation are generated by special algorithms from the Lidar data. One interesting feature of this is that the contours often bear a much higher resemblance to a real orienteering map than those usually generated for a base map. The vegetation, while imperfect given the range of New Zealand forest types, can usually be interpreted in useful ways – sometimes to the level of spotting individual bushes!

Following the pioneering work in Finland, we’ve put this onto a website for all to see. Some features may not be entirely intuitive or working yet. The most useful tool for mappers is probably the export function. Click the black square on the top left corner of the map, select an area and click export, and a PNG image file will be generated from map tiles in the selected area, accompanied by a PGW world file. This can then be opened as a background map in OCAD or even course setting programs like Purple Pen. Another useful feature is the marker button, also on the top left of the map. Click this button and then a location on the map and it will open Google Maps with a pin in the approximate location selected.

So far, most of the data made available by LINZ on the ‘OpenTopography’ website has been processed. Additional data has been sourced for a large region North of Auckland and is being sought for the entirety of Northland. The whole of the Wellington Region has been processed
and is by far the most impressive area on the map, covering around 10,000 square km. In total 30,000 square km had been processed by mid year and work is continuing.

Aside from the obvious use as a basemap, it is hoped that the map will prove useful in the future for events such as Rogaines and Adventure races in place of Topo50 maps. Another potential use is finding and evaluating new areas to map – use the button ‘Interesting Areas’ to flick through some intriguing locations spotted during processing!

Powers and Limitations of Lidar Data

Some comments and questions from the ONZ Mapping Committee.

Sometimes, “Lidar data” is loosely used to refer to contours generated from Lidar surveys by a local authority, perhaps available from them or through the LINZ website. In what follows we go back to the “Point-Cloud Data” which is the mass of XYZ figures which we can now process ourselves to get contours, and much more besides. For a background to Lidar data in a New Zealand orienteering mapping context, see our Dec 2018 Mapping bulletin via the ONZ website Mapping Resources.

The “power” of Lidar data comes from:

It all seems like Christmas. But sometimes you come to try on that T-shirt with the clever slogan and it doesn’t fit. We’ve got some experience now, and would encourage you to test Lidar results on areas you know well, before relying on it for new projects. Here are some things we’ve come across. The Mapping Committee would be pleased to hear about (a) other
things to look out for and (b) ways to overcome these.

The above is hardly surprising, we had a learning curve with aerial photography and what made for good and bad basemaps.

Status of the Sprint Specifications

It’s been a busy few years with both our main mapping specifications changing. Twice. Each.

This section is particularly aimed at those responsible for collections of maps. If you deal with one map at a time just make sure its symbols come directly from the latest version of OCAD.

The Sprint Specification changed last year, to the ISSprOM2019. Then, early this year with little fanfare, the IOF released an update to ISOM Appendix 1 – including changed colour order and definitions for ISSprOM. This effectively created an ISSprOM Version 2!!!

Sorry don’t blame us. Here are the three situations:

Some will remember that there were also changes to ISOM shortly after it came out. Our advice on that is in the May 2019 Mapping bulletin, via the ONZ website Mapping Resources. Go to Appendix: More Detail for Mappers.

Whew! After that you need some light relief. Committee member Michael Croxford has set up a Facebook group called “Orienteering Mappers New Zealand”. Recent topics include the new version of OOM, more Lidar data on the OpenTopo website, and quirky discoveries in the field.

It’s a public group that all can see, but you have to join to post.

We look forward to seeing many of you at the NZ Champs at Labour Weekend.

This bulletin goes to regular mappers known to the Mapping Committee, and ONZ clubs.