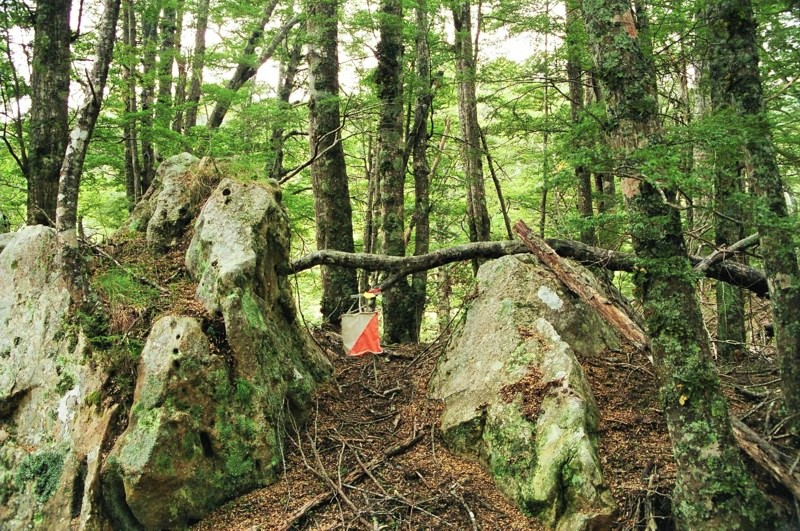 With WOC and JWOC over, the Australian Carnival underway, and only one round of the World Cup (with Tim Robertson our only entrant) to go, orienteering activity has levelled off a bit through September. That has given time for thoughts about where we currently are at and what changes/modifications to we need to make to both the High Performance plan and how we generally approach HP orienteering in New Zealand. So no apologies are offered for the fact that this set of HP News concentrates very heavily on analysis. However, congratulations are also due to the Schools’ Team for some excellent results this week in the Australian Schools Championships.

Although I am not yet sure of the final results in the Southern Cross Challenge, there have been some excellent performances by the schools’ team in Australia this week including winning 3 of the 4 relays. The only individual winner was Sofia Safkova in the Junior Girls long distance although there were second placings for Briana Steven in Senior Girls and Jenna Tidswell in the Senior Girls sprint. Winning and New Zealand times and places were as follows.

At the end of July, in the aftermath of JWOC, I commented on a brief set of statistics showing where New Zealand juniors had finished in the field over the years 2011-2016. These, shown again below in the form of the number of finishers in each quartile of the field in the sprint and long distance events, and the number of qualifiers for the middle distance final, tended to suggest that, relative to the Junior Men, the Junior Women were underperforming.

least in my mind, the question of why this was the case. Several people contacted me with their suggestions, or indeed suggested that the basic premise was not in fact correct but could be the result of, for example, changes in the size of fields. As a result I
have now had a somewhat deeper look at JWOC results going back 10 years, including tracking improvements or otherwise of athletes who have competed several times at JWOC. What follows is not a complete analysis but, I still maintain, supports the original assertion and requires some hard questions to be asked.
The four graphs below show JWOC performances in the sprint and long distance by individual athletes over the last 10 years. The y-axis represents where an athlete finished in the field – for example 0.1 represents  a finish in the top 10% of the field – in other words the lower the number the higher the finish. Where a line is red it shows that from one year to the next an athlete improved from one quartile of the field into a higher quartile (e.g. top 50% to top 25%). Similarly a blue line shows a drop in performance from one quartile to another (e.g. top 50% to top 75%). Although this is, admittedly, a relatively simplistic way of representing the data, it does give an idea both of the general level of performance and how individual athletes’ performances changed from year to year. 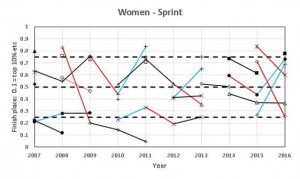 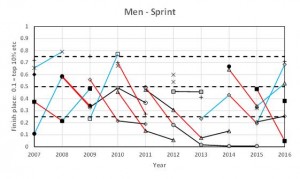 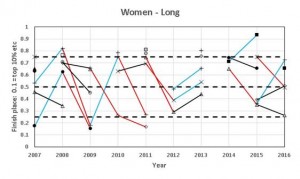 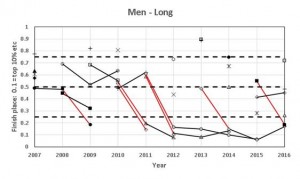 There are several points that appear to stand out from the graphs.