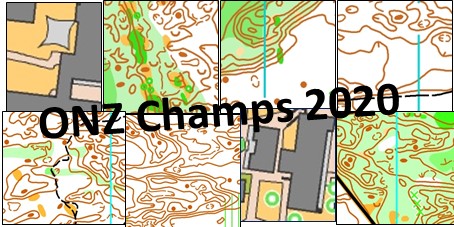 At last, after several months in abeyance, an event (the Ultralong, to report on! Not only that but the renewed prospect of the ONZ Champs at Labour Weekend (even without the relay) and hopefully more to come after that. So, sit back, take a deep breath, and read on….

The PAPO/University of Canterbury Ultralong held on the first weekend in September in the Canterbury High Country near Cragieburn produced some remarkably close racing for such a long event. Of the four National O League classes only W20E saw a victory by a margin of more than 2 minutes.

In M21E Matt Ogden led from control 2 but was never able to get a really clear break on Joseph Lynch who was never more than 2 minutes behind, the final gap being 95 seconds over 13.1 km. Aaron Prince in 3rd place had a similarly small gap over Chris Forne in 4th, with both Tane Cambridge and Nick Hann within another 2 and a half minutes. W21E looked like a procession for Lizzie Ingham until a 3 and a half minute mistake on number 11 put Georgia Whitla within 2 minutes. That was as close as she came with Lizzie winning by just under 2 minutes. Sara Prince filled third.

Closest race of all was M20E where, after just under 10k, only 3 seconds separated Cameron Jones and Ryan Moore. Remarkably, Cameron never led, and leaving the last control was 36 seconds behind Ryan who had held the lead since control 3. However, the split to the finish, the fastest on the course, took Cameron into the lead and gave him the narrow victory. In W20E there was a commanding win by 2019 ONZ Long Distance winner Marina Comeskey who had a nearly 14 minute margin over Marisol Hunter, with Jess Sewell in 3rd.

Being an Ultralong there was, of course, lots of route choice and, with the benefit of live tracking some analysis of the interesting ones is possible. One of the best examples was a route choice that was relatively similar on all the top courses was that from 6 to 7 on M21E. This offered the choice between a direct route, which involved a very steep descent, negotiating the massive bluffs around Hogs Back Stream, and a much longer route to the south using the tracks and tussock.

As can be seen, there was quite a division in how this was approached. Matt and Aaron went straight, while Nick and Chris went wide. Matt’s direct choice proved fastest although only by a minute over Nick who actually covered over 600 m more ground and had a faster km rate for the leg. Chris was just as fast as Nick but took a route which was over a kilometre longer than Matt.

Following the Ultralong the leading positions in the NOL are as follows:

The next round of the NOL will consist of the 3 individual races at the ONZ Championships at Labour Weekend.

Following the weekend of the ultralong a small number of those competing – Lizzie, Imogene, Kayla, Ronan and Jonty – enjoyed several days training in Canterbury, organized by Gene Beveridge.

This included a memorable series of intervals on Castle Rocks, famous of course from Lord of the Rings. Gene’s 44 control exercise on this amazing area is shown above. The results of live tracking for this can be found at https://events.loggator.com/6r1S6Q.

ONZ Championships – not quite as you know it

It has now been confirmed that the ONZ Champs will go ahead at Labour Weekend in the Manwatu/Horowhenua. However, it will be an abbreviated championships including only the three individual races, the relay having fallen victim to uncertainty about Covid-19 Response Levels and maximum gathering numbers. As a result, the sprint will now be held on the Monday rather than the Friday evening, the amended programme being

Entries close on 9 October (just over a week away) and can be made at https://events.orienteering.org.nz/nationals/entries/. The technical committee have made some amendments to the rules to allow for separated start blocks. The World Ranking Events will, however, be run as normal.

On the ground, preparations for the middle distance are complete. The first visit to Parewanui since lockdown took place last week (also hindered by samba deer hunting season) when Bill Edwards, Russell Higham and Malcolm Ingham checked that all the tapes marking control sites were still extant. Still to be completely finalised, following the change of venue, are the sprint courses, although some test running has taken place.

National Champs around the globe under Covid-19

While preparations for the ONZ champs have been on-going, IOF published an article a couple of weeks ago about how some other countries had been managing to run National Championships under corona virus restrictions. For example, Norway spread their middle and long distance championships over several days to keep numbers to a maximum of 200 at any one time. This did not include the veteran grades, only the 18-, junior and senior elites. Similarly, Finland ran their middle distance champs over 2 days with no arena facilities or on-site results display, special social distancing measures at the starts, and competitors being asked to leave the area shortly after finishing. Sweden will hold their sprint championships on 10-11 October with no more than 50 people competing at one time. Perhaps most noticeable has been Switzerland who held the national long distance over 2 days in September to keep numbers under a 1000!

To compare this to the New Zealand context, as we ourselves debated whether to hold the ONZ Champs, the following table shows the then current case numbers at the time in each of these countries (plus a few others).

On these numbers, anyone for WOC2021 in Czech Republic?

Slightly more recently, and pertinent to the question above, Sport New Zealand have circulated a questionnaire to NSO’s to see what the likely requirements for quarantine will be, until the end of October 2021, with respect to New Zealand teams and international athletes returning from overseas. The likely events of interest to ONZ are obviously WOC, JWOC and, to a lesser extent, the 3 rounds of the 2021 World Cup ad WMTBOC.

As many will have seen from Compass Point, the Oceania Championships originally scheduled for January have been moved to January 2022. To replace the delayed event Peninsula and Plains, Nelson and Marlborough Orienteering Clubs are organising a series of high-quality events in January. These will start in Marlborough on Saturday 9 January with a morning individual sprint and a sprint relay in the afternoon. There will then be a middle distance on the Sunday in Ward, followed by four days of events in Christchurch from 14-17 January.

As, hopefully, NZL remains Covid-free, prior to the above events there is still a hefty swag of high-quality orienteering to enjoy, although at this point details and confirmation are still awaited for some events. It does make November look a busy month. All the following are part of the 2020 NOL still to come.