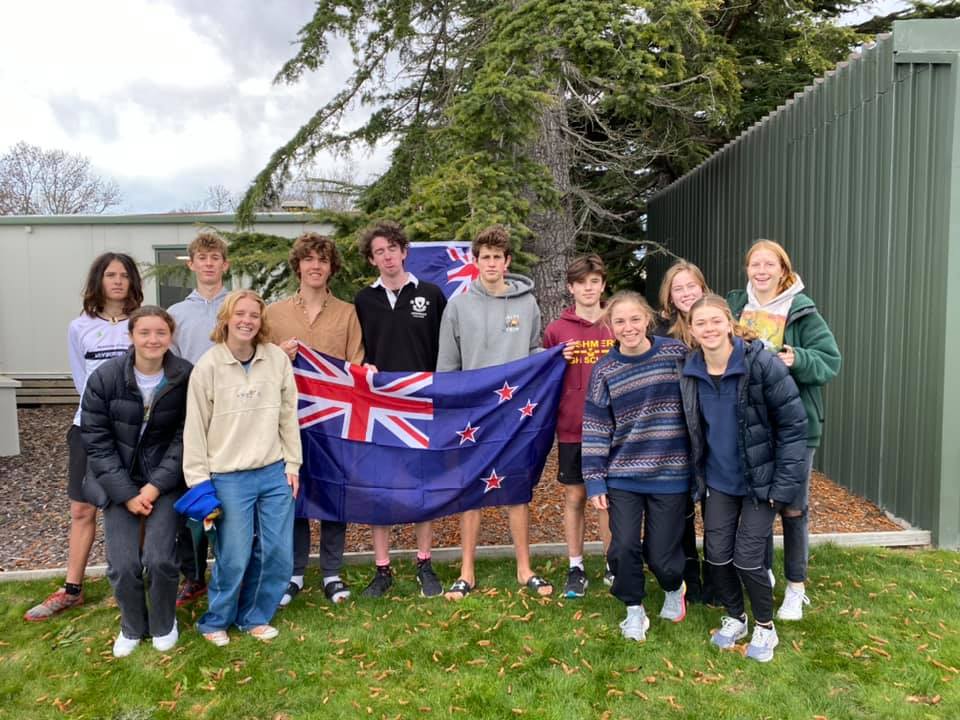 After the loss of Queen’s Birthday 2020 to Covid-19 it was a near-run thing that the 2021 version did not get disrupted by the Canterbury flooding in the week leading up. However, we escaped and a report follows below. WOC2021 is also on the immediate horizon, with Toby Scott and Tim Robertson the only NZL representatives. There are also developments in the pipeline for the Oceania Championships and, travel-bubble permitting, the forthcoming Australian Carnival in September.

After a two-year Covid induced hiatus the World Orienteering Championships returns on Saturday 3rd July albeit with a much reduced New Zealand representation made up of European based Tim Robertson and Toby Scott. Following the cancellation of sprint WOC in Denmark last year the Czech organizers agreed to add both a sprint and a sprint relay to what was originally a forest only WOC. Although there will be no NZL sprint relay team this does give Tim a chance to repeat (or better?) his silver medal from the last time an individual sprint was held at WOC in Latvia in 2018. Toby also had a good forest WOC in Norway in 2019 with an impressive 30th place in the long distance backed up by a solid relay run. However, with no on-site New Zealand back-up in the form of a larger team and manager, on-arrival Covid testing and associated precautions, matching such results will be especially challenging.

The 2021 programme starts with the sprint. The men’s qualification heats start at 8 pm NZST on Saturday evening with the final kicking off early Sunday morning at 1.31 am. Tickets for the tracking and live TV can be purchased from the IOF live web site https://orienteering.sport/event/nokian-tyres-world-orienteering-championships-2021/welcome/ at the cost of 20 Euros for all races or 6 Euros per race. With no direct New Zealand interest in the sprint relay, Toby and Tim will next be in action in the middle distance on Tuesday 6th July. Like the sprint this features qualification and final on the same day. The last New Zealand involvement will be in the long distance on Friday 9th July.

With Canterbury still only just starting to dry out after the previous weeks horrendous flooding it was no doubt with a sense of relief that the organizers of Queen’s Birthday 2021 found that they had to make little in the way of last minute alterations to their plans. Following an original suggestion by Briana Steven, the event was also used to give the JWOC team selected post-ONZ Championships a taste of staying, travelling and competing together. Approximately half the named team running in the inter-Schools competition, with the other half were in M20E/W20E, presented a few problems in terms of direct competition this was minimized by putting the Senior school classes on the same courses as the junior elites for all but the long distance, with both joining M21E/W21E on the same courses for the sprint. With the wonderful support given by Briana, Matt Ogden and Sarah Stewart, quarantine and live tracking for the team members, hopefully this made up at least in part for another missed JWOC.

Saturday’s sprint on Canterbury University campus included significant route choices as well as complex detail. The first appearance of the year by Tommy Hayes partly made up for the absence of Joseph Lynch in the men’s field, but with these 3 currently the top 3 domestically based sprinters it was a shame that, as at the ONZ championships, all three did not line up together. As it was Matt had a 10 second win over Tommy with a further 30 seconds or so back to Aryton Shadbolt who, having finished behind Will Tidswell in M20E at the ONZ Champs, took revenge by 14 seconds. The women’s race, as at the nationals, was always most likely to be between Lizzie Ingham and Penelope Salmon. In fact Lizzie was untroubled with a winning margin of over a minute when a nearly 30 second mistake by Penelope on 14-15 followed by a smaller overshoot on 19-20 saw her beaten into 3rd place by almost exactly that margin by Imogene Scott. There were also strong runs by JWOC athletes Kaia Joergensen and Emily Hayes, both running in Senior Girls.

To try and preserve as far as possible the Senior Schools classes running the same courses as the 20E classes, Sunday’s long distance saw the two sets of courses being largely identical except for the 20E courses have an additional loop at the end. Thus, the Senior Boys A had the same course as M20E as far as control 17 before finishing with 20 and 21 from M20E (see below). This allowed for some interesting post-race comparisons as, for example, through the common part of the course to control 17 Felix Hunt and Nathan Borton, 1st and 2nd in the Senior Boys A were ahead of all but M20E winner Will Tidswell. Similarly, Kaia Joergensen, running Senior Girls A, had a massive lead at the point the W20E course started its extra loop.

In terms of results Will had a 7 minute margin in M20E over Ronan Lee with Aryton in 3rd place, and Georgia Skelton won W20E from Jesse Fa’avae. In Senior Boys A Felix edged out Nathan by 10 seconds, while Kaia had an 8 minute margin over Penelope Salmon.

M21E was marked by the welcome return from injury of WOC runners Gene Beveridge and Nick Hann. It was business as usual at the top though as Matt, despite two early errors which saw him in 7th place after 6 controls, had a nearly 3  minute lead over Gene at the finish. Joseph Lynch was another 3 minutes back, with a further 3 minute gap to Nick in 4th. It was  similar familiar story in W21E where lizzie had another comfortable victory over Imogene in 2nd and Sara Prince 10 minutes further back.

At the middle distance the 20E and Senior school courses were again combined, but the big story was an uncharacteristic 11 minute mistake by Lizzie! This resulted from misreading an earthquake crack and ending up with a wall of blackberry between her and the control. With Imogene also dropping time this let Tessa Ramsden in for her biggest win yet beating Briana by a mere 1 second with Imogene 3rd and Lizzie 4th. A more minor surprise was in W20E/Senior Girls where Kaia also dropped time at several controls and similarly finished in 4th place in a combined field headed by Emily Hayes, with Isabella Zinzan and Sofia Toes taking 2nd and 3rd.

The top 6 in men’s elite, was a who’s who of domestic orienteering with Matt, Nick, Joseph, Cameron de L’Isle, Gene and Tommy finishing in that order. M20E was very close with only 22 seconds covering the top 3, led again by Will and Aryton and with Zefa Fa’avae in 3rd.

The full, updated, NOL table following Queens Birthday can be found at at https://www.orienteering.org.nz/…/high-performance/gpages/ under National O League.

In short, after QB, with 3 races to go at Labour Weekend, it is already clear that Matt Ogden (M21E), Lizzie Ingham (W21E), Will Tidswell (M20E) and Kaia Joergensen (W20E) cannot now not be overtaken. Congratulations to these 4. The  remaining  battles are for silver and bronze. Leading scores are as follows (maximum 800 for 8 events counting – no counting to date in brackets).

Introducing a Knock-out Sprint into the Oceania Championships

One of the benefits of winning an elite class at the Oceania Championships is that it provides the winner with a personal place in that race at the next WOC. This is in addition to the normal allocation of places. Thus, the winners of the M21E and W21E sprint in January will gain places in the individual sprint in Denmark later in the year. Similarly, the winners of the middle and long distances will get places in those races in Switzerland in 2023. With the introduction of a Knock-out sprint into WOC in 2022 the present lack of such a format in the Oceania Championships essentially means that NZL (and AUS) athletes are denied the opportunity of a personal place in that format.

To rectify this the HP Leaders in both countries have been proactive in drawing up a formal joint proposal to go to IOF to introduce a Knock-out Sprint into the Oceania Championships from January 2022. The proposal also seeks to address the imbalance in the Oceania rotation which complicates the awarding of personal places. The idea is that when Oceania is in New Zealand (generally January) the sprint and KO sprint will be part of the normal programme, but when Oceania is in Australia (generally September), for the elites only, the Oceania sprint and KO sprint will be held earlier in the year. Thus the rotation will look as below.

Hopefully this will all be in place very quickly, with an Oceania KO sprint already pencilled in for Saturday January 8th 2022.

Although the pause in the trans-Tasman bubble has thrown a hopefully temporary spanner in the works, a HP trip to the Australia Carnival is September is in the making. Thus far 13 people have signed up and it is apparent that shortage of accommodation may well restrict any further expansion in numbers. As the six individual events will count towards the trans-Tasman O League a hefty presence of Kiwis in 21E and 20E classes is welcome, as well as being likely to boost the Pinestars Test team (see below).

Those wishing to be considered for selection should contact Al Cory-Wright ([email protected]) by 31 July 2021.

Note: as the 4 races do not conflict with the Australian Schools Championships, members of the NZL Schools Team are eligible for selection.