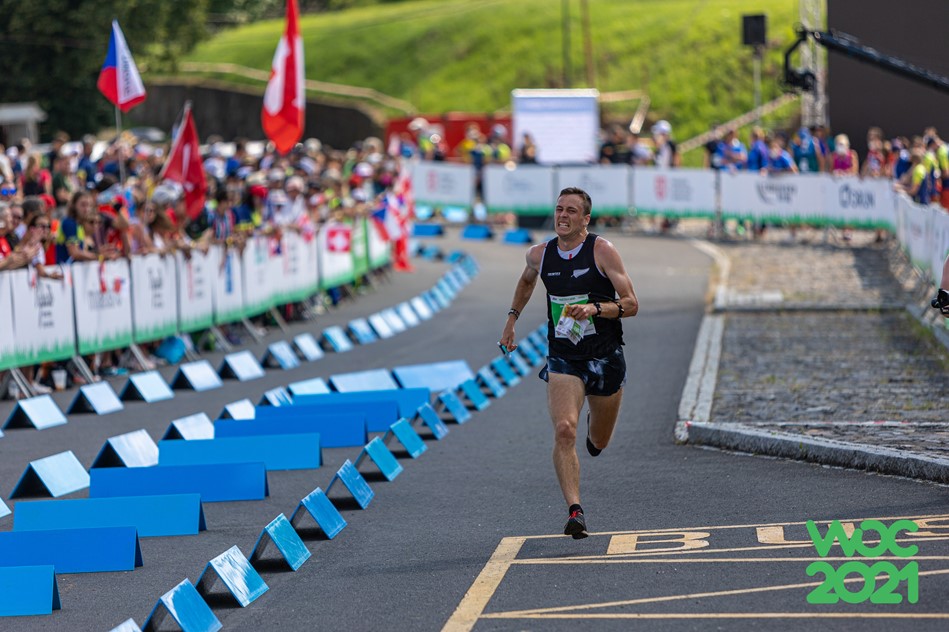 WOC2021 proved both exhilarating and frustrating for many in New Zealand. The latter through the inability to send athletes from home shores, the former because of Tim Robertson’s astounding success in winning a bronze in the sprint. Although mentioned below, I’d like to re-iterate here that, having seen the masses of documentation and regulations that Tim, and Toby Scott, had to deal with to compete under Covid, they both deserve a huge amount of credit for not only doing so, but for doing New Zealand proud. Well done guys!

With no athletes travelling from New Zealand to WOC in the Czech Republic a huge amount of credit is due to Toby Scott and Tim Robertson, the two overseas based Kiwis, who attended and held the flag high for those of us back home. The protocols and requirements associated with holding the event in the presence of Covid were many, and simply managing to deal with these in the absence of a large team bubble cannot have been easy.

Of course, as we all know, Tim again did us especially proud winning his and New Zealand’s second medal at WOC, this time a sprint bronze to go with his silver from Latvia in 2018. Both the qualification and final took place in the Fortress of Terezin, a UNESCO World Heritage Site consisting of “eight pentagonal bastions, …, joined by a curtain wall in a complex system of construction”. These featured a complex network of tunnels under walls putting close map reading and route choice at  a premium. Tim made it easily though the qualification race, held on Bastion 3, finishing 3rd in Heat A, but Toby mis-punched, apparently omitting the middle control in a close sequence of 3.

In the final, Tim produced another great race and after the fourth control was never lower than 4th place, taking the bronze on;y 13 seconds behind winner Isaac von Krusenstierna of Sweden. Second place was taken by Norwegian Kasper Harlem Fosser, 6 seconds ahead of Tim. Yannick michiels of Belgium was 4th with another Swede, Max Peter Bejmer, 5th and Switzerland’s Florian Howald in 6th.

With no New Zealand representation there was much less interest in the sprint relay although, this was a race that with full representation New Zealand would also have been competitive in. As it was a start to finish progression for Sweden. After Tove had given them a 19 second lead on the first leg, Emil Svensk and Gustav Bergman stretched this to 55 seconds at the start of the final leg. At this point Switzerland held second place, but a storming last leg from Andrine Benjaminsen pulled Norway through for silver and even closed the gap on the Swedes to 26 seconds at the finish. Switzerland held on for 3rd with Denmark, Czech Republic and Britain rounding out the top 6.

The middle distance presented the challenge of both the qualification heats and the final being on the same day. Additionally, they both had the same arena and finish with the qualification race taking in the rocky slopes of the hill to the south, and the final a much more intensively rocky hill to the north. Both Tim (14th in Heat A) and Toby (11th in Heat C) made it safely through qualification, with each heat having a winning time of around 30 minutes. The final was a different story with only the men’s and women’s winners getting under 40 minutes as the very stony and green terrain made for slow progress. In the men’s race Matthias Kyburz won Switzerland’s only gold medal with a 40 second victory over Gustav Bergman and with Ruslan Glibov of Ukraine in 3rd. Toby and Tim finished in almost identical times in 41st and 42nd respectively. The women’s race was almost a complete Swedish/Norwegian benefit with only Switzerland’s Simona Aebersold breaking into the top 6 in 3rd place.

Like the sprint relay, the forest relay had little participation outside Europe with Japan and the United States the sole representatives from the rest of the world. The Scandinavians dominated with Sweden taking both titles, although Norway led into the final leg of the men’s relay, and Switzerland took silver in the women’s.

The final race, the long distance, provided perhaps the biggest talking point of the week. The terrain was a series of steep, very rocky hills ringed by cliffs with an extensive track network providing massive route choices. Magne Daehli of Norway started 3 minutes in front of Matthias Kyburz who, in turn, was 3 minutes ahead of Kasper Harlem Fosser. A mistake by Daehli at control 3 saw him caught by the Swiss. At the start of the long leg to 5, the two of them then took a route out of 4 which essentially maintained height, while Fosser dropped to the track to the north and gained time with the end result that the three of them came together where their routes converged at a track junction  From there, with only very minor variations, they essentially ran the rest of the course together Fosser winning in 1:35:55, Kyburz taking 2nd and Daehli 3rd, a result that has prompted much discussion including the comment from the subsequent IOF Council minutes: “The fact that all 3 medals in the men long competition went to 3 athletes running together requires follow-up discussion”.

Although a further approximately 15 minutes back, Tim had another excellent run to finish in 27th. Toby had a long day out finishing in 55th.

The women’s title, no surprise, went to Tove Alexandersson, giving her a clean sweep of 5 titles during WOC – surely a record. She was 3 minutes clear of Gemperle, while aebersold picked up her 4th medal of the championships.

One footnote to WOC, despite all the precautions, was the occurrence of two positive Covid cases in the final few days. Subsequently another 13 positive cases have occurred.

Unable to attend WOC several of the New Zealand elites organized their own local versions during the week of the event. Leading lights in this were the ever-imaginative Canterbury University Club who had a sprint, middle and relay on various maps, including using the rocks of Castle Hill to provide some Czech-like terrain. There were also sprint and middle distance versions around Wellington with a middle distance final on a suspicious looking adaptation of Hydrabad in Waitarere Forest.

Joseph Lynch also organized a competition to predict the medallists at WOC. Without the benefit of 3 minute start intervals and running together this was won by Briana Steven ahead of Cameron de L’Isle and Joseph himself.

The International year ahead

The suspension of the travel bubble with Australia has disrupted a lot of plans and brought uncertainty to many others. Both the High Performance trip to Tasmania and New Zealand participation in the Australian Schools Champs are off, as is the Pinestars-Bushrangers Test Match. Until and unless NSW, and as of today Queensland, get things under control again there must also be some doubt about Oceania in January, although at this stage there is no change to the event plan. As reported last month, this includes a Knock-out Sprint on Saturday 8th January in Blenheim, and a formal proposal has now gone to IOF jointly from AUS and NZL that this should be an official Oceania Championship event.

IOF have also announced the criteria for selection for the World Games in the USA next year. The current plan remains that the pre-Oceania sprint relay on 7th January in nelson, along with the Oceania sprint and middle races will be used to decide which of Australia or New Zealand represents Oceania. Should there be a disruption to Oceania which prevents this who gets the place will be decided on a calculation of world rankings. Following WOC one extra piece of news is that should NZL not attend the World Games as a team, Tim Robertson will have a personal place.

For the inveterate night owls who like to stay up and watch these things, the second round of the IOF World Cup is in Sweden between 12-15 August. This round consists of a long distance (12 August), a middle distance (14 August) and a relay (15 August). Again, New Zealand will be represented by Tim and Toby and, hopefully, there will be an unofficial relay time made up with Henry McNulty as the only Australian competitor.

Applications for the 2021 under 23 Camp will open shortly. This will be from 4-10 December based in Palmerston North and will be followed by a 2-3 day elite camp aimed at preparation for Oceania.

Also taking place in July, a world away from WOC both in distance and terrain, was the New Zealand Ski-O Championships. This, organized by Chris Forne, consisted of two days of competition, with the first being a standard course with long, middle and short distance options, followed by a score event.

Results can be found at https://www.roc.org.nz/event-results/.