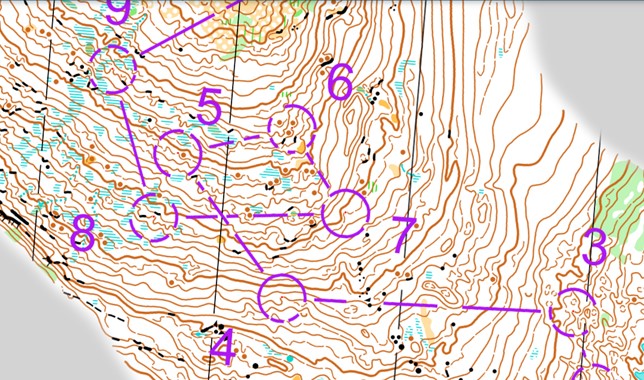 With Covid hitting the country orienteering has dropped somewhat off the radar in the last few weeks in New Zealand. Indeed, there is a rapid re-assessment of future events and training camps taking place. However, as well as some on-line activity there has been the second round of the World Cup and Jukola to watch and, hopefully, in a few weeks we will see Level 2 allow events to restart in at least some of the country. Until then stay safe, especially those of you in Auckland.

The second round of the 2021 IOF World Cup took place around Idre Fjäll, Sweden, some 250 km to the north-west of Stockholm. Once again New Zealand was represented in the two individual races, a long distance and a middle distance, by only Tim Robertson and Toby Scott. They were joined for the relay by Henry McNulty to form a joint Australia/New Zealand team. The hilly terrain at an altitude of 630-880m above sea level was studded with rocks, crossed by multiple marshes, and featured a mix of highly detailed and bland area.

At the halfway point of the men’s race Sweden’s Gustav Bergman held a narrow lead over WOC long distance champion Kasper Harlem Fosser of Norway. Fosser then took a one minute lead over Bergman by control 22 out of 26, at which point costly mistakes on 23 and 25 saw Bergman drop into 4th place, overtaken by Magne Daehli and Daniel Hubmann, respectively 3rd and 4th at WOC. The two Kiwis had long days with Toby finishing 61st in 2:08:52 and Tim a further 15 minutes back in 83rd. Long days were in fact the order with only Fosser getting under 100 minutes.

Having won all three individual titles at WOC and both the races in the first round of the World Cup, Tove Alexandersson suffered her first defeat of the international season finishing 3rd behind Simona Aebersold of Switzerland and Andrine Benjaminsen of Norway. Like Bergman, Alexandersson, who reportedly has had Covid since WOC, led through the arena passage before dropping out of the lead. It was Aebersold’s first victory at WOC and World Cup level after a stellar JWOC career.

The middle distance proved to be another race in which the highly technical terrain caused many problems for a lot of competitors. WOC middle distance champion Mathias Kyburz was one, finishing 2 minutes down after a 3 minute error on control 3. The big surprise, however, was in the women’s race where Swedish junior Hannah Lundberg, the very first starter, set a time of 39:20 which none of the following runners was able to beat. Aebersold got closest bur was just over a minute adrift ahead of  Natalia Gemperle in 3rd. The men’s race was much closer with Joey Hadorn of Switzerland, another not long out of junior ranks, taking a 3 second victory over Hubmann. With Tim not starting, Toby was the only New Zealand representative finishing 90th.

World Cup relays are somewhat different to WOC in that countries can enter more than 1 team, as well as combined teams, such as the Australia/New Zealand combination being allowed, albeit unofficial. This resulted in the top 9places in the men’s race being filled by only 4 nations, although things were a little more spread around in the women with 6 countries in the top 10.

The men’s relay was very much a Swedish tale. After the first leg Sweden 2 held the lead by 20 seconds from Sweden 1, with Norway 1 and Finland 1 in 3rd and 4th. Sweden 2 then dropped right out of contention as Sweden 3 took the lead at the end of leg 2 ahead now of Norway 1 and Sweden 1, with Czech Republic 2 in 4th. The slightly longer final leg saw things change again with Sweden 1 holding off Norway 1 by a mere 1 second, and Switzerland 1 continuing a steady improvement through the field to finish 3rd. henry, Toby and Tim ran in that order, finishing 28th in a massive field of 43 teams. In contrast, the women’s race was relatively straight forward 1-2 for Sweden, although Sweden 2 took the win over Sweden 1 and things were slightly helped by a mis-punch by Simona Aebersold on the last leg for Switzerland 1.

With NCEA examinations being pushed back 2 weeks as a result of the lockdown, the dates of the Under 23 Camp have been moved back by 4 days. The camp will now run from Wednesday 8 December until Tuesday 14 December. The location remains Palmerston North. As it is still assumed that Oceania 2022 will go ahead and that it is of importance with regard to qualification both for individual WOC places and for team entry to the World Games, given the shift from mid-week to mid-week, the weekend of 11/12 December will now be pen to other elites and will largely be focussed on sprint training. Applications for the under 23 Camp will open shortly on the ONZ website.

One of the things that has grown out of the Covid situation, largely because of the forethought of Natasha Key, the Orienteering Australia Head Coach, is a series of Sunday evening Zoom meetings on various aspects of orienteering, These are largely aimed at the High Performance community and have been attended by between 20 and 50 from the two countries. The series began with a discussion pre-WOC with Tim Robertson and Ralph Street on their prospects. Tim and Ralph returned after WOC to lead a fascinating post-Morten discussion and analysis of the WOC races. More recently Jo Mitchell a sports psychologist from Tasmania led a session on mental resilience in these rather difficult times. Things continue this coming Sunday (5 September) with a more light-hearted orienteering games session and quiz night organized by Pat Jaffe. This is open at 9 pm New Zealand time and is to all at:

Further sessions are at the  planning stage.

After being cancelled in 2020, the big Finnish 7-man relay Jukola went ahead a couple of weekends ago, just crossing into the Arctic Circle! Tim Robertson ran the first leg for his Koovee club team, which came in 20th out of the 750 teams that finished. The 4 person women’s relay had 692 finishing teams.

Laura Robertson has also returned to competition, finishing 3rd in the British Sprint Championships held in the north-west of England. The British long and middle distance championships take place on the first weekend in October.

That well-known publication New Zealand Life and Leisure magazine features an interview with Lizzie Ingham on orienteering. We believe this is somewhat more serious than the supposed orienteering that took place on TaskMaster New Zealand this week! For those wanting something else to watch, JWOC starts on 5 September in Turkey. Details can be found on the IOF Live website https://orienteering.sport/event/junior-world-orienteering-championships-2021/welcome/ . Looking at Eventor shows the entry to be well down on usual with 138 men and 119 women compared to the more usual numbers of around 190 and 150. The only non-Europeans are 5 entries from USA and 6 from Japan