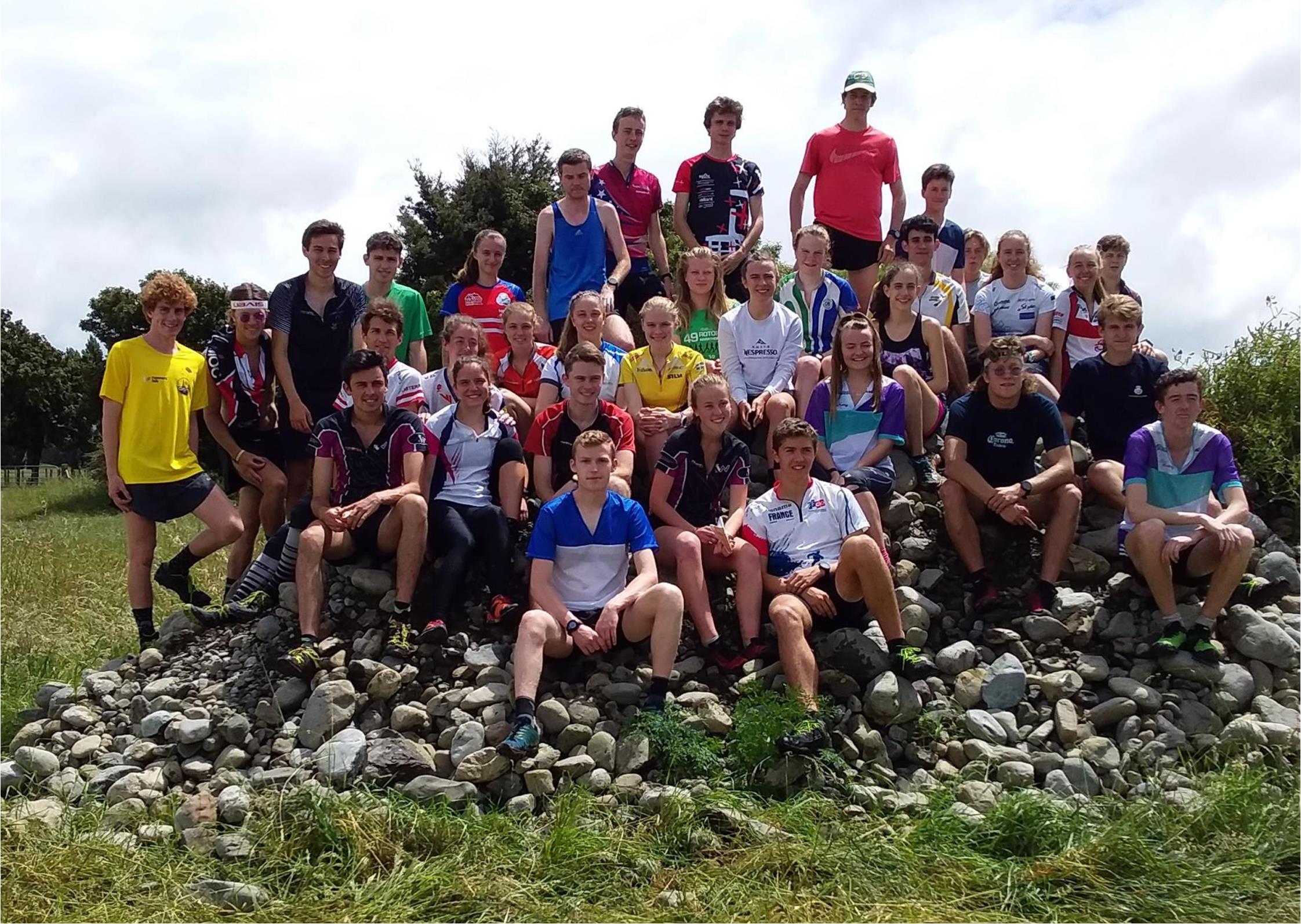 Having reported in brief on the Canterbury Champs last month, the main happening in December has been the Under 23 Camp which has again tested the physical and mental stamina of our up-and-coming elites. Also, however, December has seen the submission of the ONZ bid for JWOC2022. So now, sit back, relax and enjoy the break, but keep up the training.

The 2018 Under 23 camp took place from 8-14 December based at Mawley Park in Masterton. There were 34 athletes in attendance – 14 female, 20 male, a difference from last eyar that saw the amount of food consumed go through the roof – with Malcolm Ingham, Gene Cory-Wright, Gene Beveridge and Rachel Hendrie in charge. Saturday was arrival day with 3 minivans making their way across the Rimutakas from Wellington and various cars also descending on Masterton from points around the North Island. Training got under way on the following day when the temperature climbed to a 28oC and the 8am purchase of 2 20 litre water containers from the Warehouse proved a good buy. 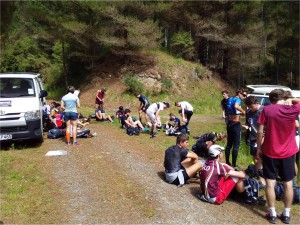 Preparing to run at Minimingi 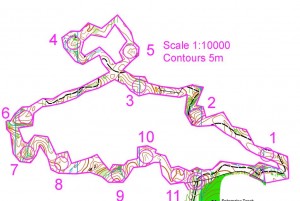 We started the camp in the rugged forest of Mingimingi used at Labour Weekend with a corridor exercise. Going to 6 many came off the track down a wrong spur, missing not only 6 but also 7 and confusing Malcolm who was going round backwards and couldn’t work out where everyone had got to! 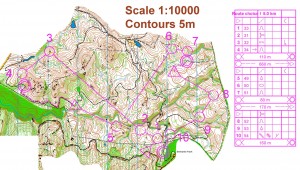 There was a then a series of O intervals concentrating on route choice. These were done in pairs by many, with some pairs testing different routes, and notes compared afterwards. The evening session involved a group presentation by Joseph, Will, Marisol and Marina giving their views on preparation for and the experiences of JWOC and WUOC 2018.

Monday could be regarded as the high intensity day. It started with fitness testing – putting everyone through the yo-yo test. Although more directly applicable to sports such as football, this is a variation on the beep test, which gives an estimate of VO2 max. In our case, the results of sports lab testing on about 15 athletes, carried out by Rachel over the last month, allows us to do a correlation between the two sets of results which we can use to gain information on all those at the camp. extend with Rachel’s lab testing results for VO2 max to aid in setting up training programmes. Highest scoring female in the yo-yo test was India James who reached level 16.8, with Aryton Shadbolt making level 20.5 among the men. 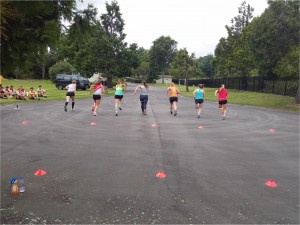 The afternoon involved sprint training at Rathkeale College. This began with a route choice exercise using corridors, but the main emphasis was head-to-head racing with a knockout sprint. This followed the official format of 6 quarter finals, 3 semis and a final, although to ensure that everyone had 3 races we had B, C and ultimately D, E and F finals as well. The A final was won by Joseph Lynch narrowly ahead of Kurtis Shuker who promptly DSQ’d himself for running across the tennis courts. This left Gene Beveridge in second and Cam Tier 3rd. The women ran against the men, with ultimately the top 3 women running against each other in the D Final with India coming out on top, ahead of Marisol Hunter and Megan Drew.

If Day 2 was the high intensity day, then Day 3 was the long day as we undertook a 2 hour drive (and return) across to the Manawatu to sample the Fusilier sand-dunes. Action started with a pairs relocation exercise before proceeding to mass start relay training. There were separate starts for the 14 women and 20 men with a course which offered 6 different variations. Final exercise, for those left standing, combined some windows with a long control pick. Total for the day of about 13k. 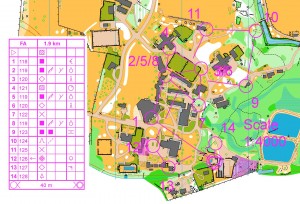 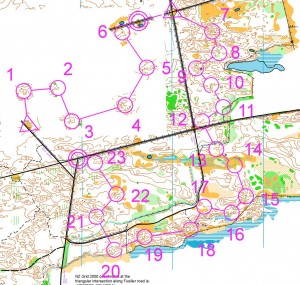 Window and control pick at Fusilier

Wednesday was our first wet day, though this was mainly in the afternoon. The morning took in a visit to Hapua Wetlands for a series of uphill intervals followed by short O courses to be completed under extreme physical pressure. Really tough but handled very well by all and not sufficiently tough to discourage people from the subsequent downhill middle distance. 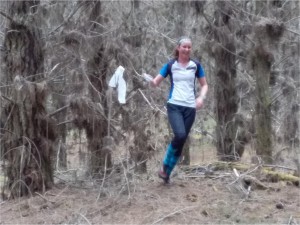 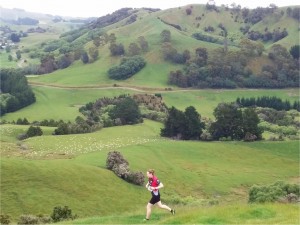 The afternoon saw a four-person sprint relay at Henley Lakes on the edge of Masterton. Perhaps not surprisingly, the first three teams to finish all had a male “guesting” as the final leg female runner, this despite the men having a slightly longer course. 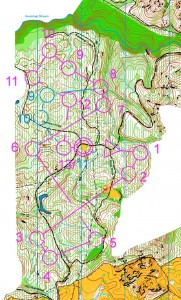 With legs tiring and bodies starting to ache the morning exercises on Riverlands on Thursday, the final full day of the camp, were cut short to allow a bit of freshening up before the afternoon camp champs. Dropping the planned relay, what remained in the morning was a compass and distance excercise with controls in very small windows on the flat, open terrain. This was made more difficult by overnight rain leaving marshes as knee deep bogs, and was not helped by the one electric fence that appeared to have been inadvertently left on!

So to the camp champs – a middle distance on the western part of the WOC map used at Labour Weekend. This consists of relatively gentle, but quite complex, terrain with the layout of the track network allowing for some interesting route choices. Among the men Daniel Monckton came out top cutting out the 3.7k in 30:23, just over a minute ahead of Ed Cory-Wright, with Kurtis Shuker in 3rd. Lara Molloy was top among the women in an impressive 34:31 for 3.3k, with Briana Steven and Marina Comeskey in 2nd and 3rd.

The camp finished on Friday morning with the camp sprint champs at Hadlow Preparatory School – specially mapped for the occassion. Although relatively complex this is a small area meaning that the course took in 3 loops. However, with Masterton Intermediate and a public reserve just a cross the road it is ripe for a larger map. On the day Kurtis blitzed the men’s field by 44 seconds to Stephen Harding in 2nd, with Jason Bond another 16 s behind. It was a lot closer in the women where Meghan beat India by only 1 second and Jess Sewell by 18.

The Junior Camp coaches then departed for Hawkes Bay while most of the rest packed into two vans for the tiring drive back to Wellington airport through Friday afternoon traffic. Thanks are due to Jean, Gene and Rachel for their help and support, and also to Gillian Ingham who came for the first weekend solely to ensure we had enough van drivers. 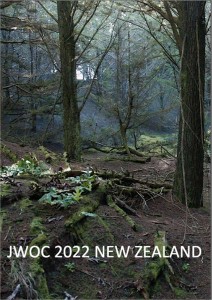 Put together by Russell Higham, Malcolm Ingham and Catriona McBean, this has now been submitted to, and acknowledged by, IOF. Projected dates, if successful, are in July although cannot be finalised until the New Zealand school terms for that year are announced. The result of the application should be known around Easter 2019.

This will take place in association with the Wellington Regional training camp and will be based in Palmerston North. One day of sprint training and two days in the sand-dune forests are planned. Those interested should notify MI by email by the week before at the latest.

The SI Champs on the following weekend are the first round of the 2019 National O-League (SuperSeries). Entry information is on the Marlborough Club website (https://www.moc.kiwi.nz/wardstock) with entries closing on 15 January. Marlborough are one of NZL’s smallest clubs and it is challenging for them to mount this event so come along and support them.