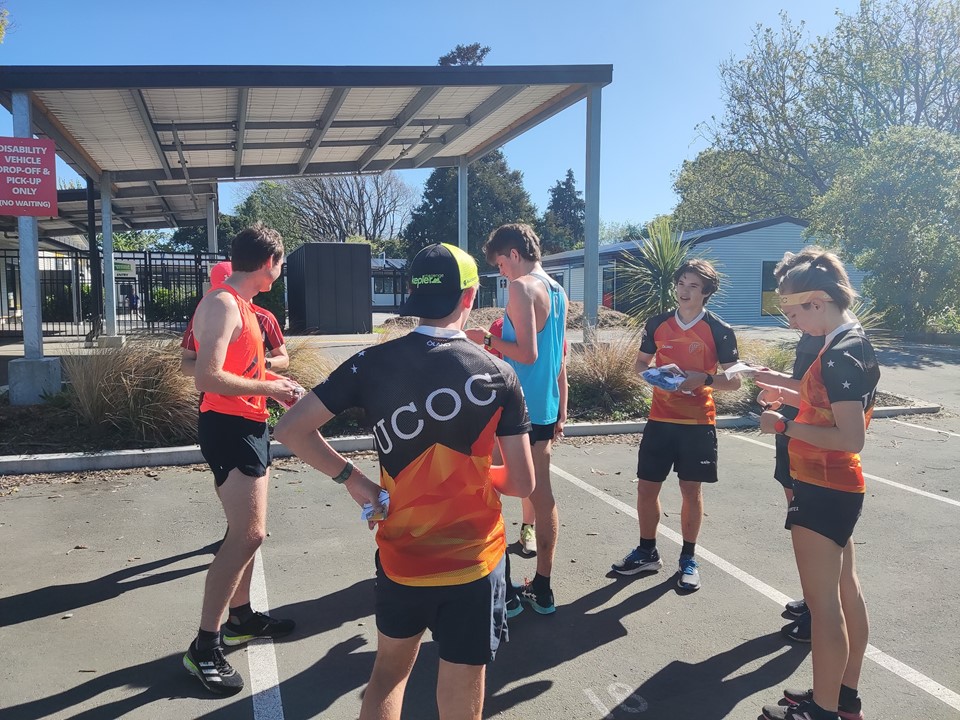 With Auckland, and now parts of Waikato, still in lockdown and the consequent cancellation/postponement of the Northern Region Championships it has been a very quiet October. The ever evolving Covid situation also means that planned events such as the Under 23 Camp, and even a local version of Oceania are in doubt. The latter has brought the issue of WRE (or perhaps more specifically, the lack of them) into focus once and is reported at length below. There is also an element of precautionary planning in case the advent of the new Covid response with traffic lights is delayed or remains stuck on red. Read on.

The end of October is usually the time when updates of the National Senior and Under 23 squads are announced. This year, as changes are in the air, things are rather different. The HP Plan is currently in revision, and part of that is a proposal to replace the squads with “designated” HP athletes. These would be in 3 categories – Senior, Junior and Development. The qualification for the first two categories is likely to be largely the same as the criteria which has been used for the squads – namely performances at national and international level in specified events and/or selection for NZL representation. The Development category would cover both seniors and juniors who have not yet met those criteria but show the potential and aptitude to do so. Details of criteria to identify those in this category are still being worked out.

While these changes may at first glance appear cosmetic, they are related to two factors. Firstly, the lack of international competition over the last two years has started to make revision of the squads, as under the present system, somewhat difficult as qualifying results become more distant. More importantly, changes to the criteria for High Performance Sport NZ (HPSNZ) funding has led to the opportunity for ONZ to apply for significant funds from HPSNZ. Specifically, HPSNZ is attempting to widen its funding base and now allows applications to be classed as an “Aspirational Sport”. Where orienteering potentially fits into this is in the form of having a targeted campaign to achieve sustained success at what HPSNZ refer to as “pinnacle” events. In the case of orienteering this means WOC and to a lesser extent World Cup. In terms of the perception of the best chance of doing this, this is judged, as outlined in the Scotland 2024 article in the last HP News, as sprint WOC. HPSNZ expects a sport to have “designated” HP athletes and a clear pathway to reach that level. With this in mind, the ONZ General Manager and HP Leader have submitted such an application to HPSNZ. If successful, would be an absolute game changer for HP orienteering, although obviously there is no guarantee of success. Nonetheless HPSNZ are continuing.

As was discussed last month part of the Scotland 2024 campaign was the introduction of the National Sprint League (NSL) with rounds as were outlined. Given the potential disruption of, at least, the early rounds due to Covid restrictions there is planning underway to form contingency plans to reschedule and even move events if necessary.

In addition to the NSL the National O League will have the following rounds.

The fact that it now looks increasingly unlikely that the Oceania Championships will go ahead has brought the issue of World Ranking Events back under the spotlight. With no full NZL or AUS representation at WOC2021 the Oceania Championships was to be used to decide which of the two represent the Oceania region at the 2022 World Games. In the absence of a decision being able to made at Oceania the IOF ruling is that the Oceania place will go to the nation with the higher placing on the IOF Nations League Table. This is calculated on the basis of the World Ranking Points of the top 10 athletes in a country – sprint and forest being treated separately. As is shown this unambiguously indicates that the Oceania place will go to Australia. However, it leads to the question of, why is Australia so far ahead when, typically, New Zealand has had at least as good if not better results than Australia at WOC and World Cup level?

The answer to this question is not necessarily simple. The graphs below show the WR points of the top 10 ranked athletes in each of the countries (AUS in green, NZL in black). Clearly in forest orienteering the top 5 or 6 New Zealanders (men and women) are comparable to their Australian counterparts. Beyond this the gap between the countries widens somewhat. In sprint orienteering the situation is very different. Only the top 2 Kiwis have comparable points to the Australians. Below this the gap becomes alarmingly wide. Why is this?

The maximum number of WRE that count to an athlete’s score is 5 in each of sprint and forest events. WRE points are usually only retained for 2 years, although currently in the wake of Covid that has been extended to 3. The numbers next to the NZL scores are the number of WRE scores that each athlete has counting. Although only the 9 and 10th ranked Kiwis in the forest do not have a full complement of WRE scores, in sprint events only the top 2 have the full 5 scores. In comparison, all the Australians have 5 scores in both forest and sprint events. Thus, there is one inescapable conclusion – if we are to improve on this NZL needs to hold more regular World Ranking Events, especially sprints.

Of course, this is not the whole story. Having more athletes in total, and assuming a similar distribution of abilities, would suggest that Australia should have more high performing athletes. Australia also benefits from having hosted the last Oceania Championships, which are automatically WRE, at which practically all the top Australians will have competed while only a fraction of New Zealanders did. However, it cannot be overlooked that Australia routinely has all its National Championship events as WRE, at least one of its Easter Carnival races, Melbourne Sprint Weekend, and generally at least one, if not more, of their National League races. In contrast in recent years New Zealand has had only the middle and long distance races at the 2020 ONZ Championships and this year’s ONZ middle distance.

Again, why is this? The answer here has to be that there is a definite reluctance of clubs to host WRE due to a perceived increased workload associated with this. I say perceived because drilling down there is in fact little if any extra work for a hosting club associated with a WRE. So what is actually required? IOF Rules 8.9-8.13 define the need for 2 Bulletins to be posted on Eventor. The first of these contains preliminary information and is posted 4 months in advance of the event. The second, which includes final details and start lists, is posted 1 week before the event. These are routinely dealt with by the ONZ fixtures officer or HP Leader. All the hosting club has to do is provide the information on areas, planners, controllers etc – hopefully all well settled 4 months out. There is little else in the IOF Rules which impact specifically on WRE – the start draw is based on World Ranking, results have to be provided in a specified format, both things done similarly by ONZ, and an IOF Senior Event Advisor (SEA) oversees and signs off on the courses and any rule variations. The most frequent such variation is the use of a 10000 rather than 15000 scale for a long distance event. Outside these the most likely issue perceived as being difficult is running a quarantine. In reality this is seldom problematic. At the 2020 ONZ Championships the walks to the start for both the middle and the long distances were sufficiently long that later starters had left the arena long before any early starters came though run-throughs or finished. In 2021 quarantine was staffed by the ONZ General Manager with no call on the event organizers.

Bearing all this in mind and, quite apart from the points garnered, the benefit that our athletes get from being exposed to the level associated with a WRE, all three individual races for the 2022 ONZ Championships and 2022 Queen’s Birthday Weekend have been put forward as, and approved by IOF for, WRE status. Associated with this is the clear understanding that the organizing clubs for these (Nelson and Wellington respectively ) will not be asked to undertake any additional work beyond that ordinarily involved on putting on the events – anything specifically associated with the WRE will be done by ONZ. It is proposed that these events (ONZ Champs and Queen’s Birthday) should henceforth always be WRE – the ONZ Championships because it is the premier domestic event each year, Queen’s Birthday because, as the home leg of the Pinestars-Bushrangers Test Match, it has a particularly strong field. Ideally, with the advent of the NSL at least one additional race in this can also become a WRE to help close that gap with AUS.

There is one potential problem with this approach. That is the need for an SEA. Currently New Zealand has only three IOF approved SEA and while Gillian Ingham will take on the role for the 2022 ONZ Championships and Graham Teahan for 2022 Queen’s Birthday, to avoid overload of this small number of people it is necessary that more people come forward to be approved as SEA. With this in mind ONZ is budgeting to hold an IOF SEA clinic in New Zealand.

As apparent from recent HP News Canterbury University OC appears to be eleader in the country for organizing training. It was no surprise therefore that undeterred by the postponement of Labour Weekend, they swung into action to put on their own UltraSprint.

Joseph Lynch reports: “UCOC held it’s final event for 2021 in the form of 16 sprints in 10 hours across Christchurch taking inspiration from the 2018 ‘Sprint Auckland Day’. Thirteen different UCOC members and friends helped to plan the 1km courses (special thanks to Tommy, Daniel, Marisol and Malcolm). We also used this as an opportunity to help people learn course planning and Condes skills.

63 runners turned up bright and early at Nga Puna Wai to begin the day, with Matt Ogden taking an early 26 second lead ahead of young gun Felix Hunt and Anna Babbington (one to watch for the future) 23 seconds in front of Pheobe Hunt. Cartsen just looked happy to be there!

Other special courses included a mass-start at Burnside with 6 different course variations (well received by all) and the finale indoor-o at ‘The Castle’. This featured a mirrored second floor which proved very tricky for many people to wrap their heads around.

All in all I think we felt very lucky to be able to run an event like this at the moment, it was definitely a good excuse to procrastinate our exam study!”

Under 23 Camp and elite sprint weekend

Applications for the Under 23 Camp in Palmerston North (8-14 December) have closed at 22 applicants. Approximately 9 of these are Auckland based and therefore there is doubt as to whether or not they will be able to attend. After much discussion it has been decided that irrespective of this the camp will still go ahead. However, a condition of attendance will be that athletes have been double vaccinated against Covid-19. The rationale for this is that important aspects of the camp are group discussions in the evenings which , by nature, take place indoors in confined space, communal cooking and eating, and even group travel in minivans. Full confirmation of this will be sent out to applicants shortly. The same applies to anyone wishing to attend the elite sprint weekend which is embedded in the camp.