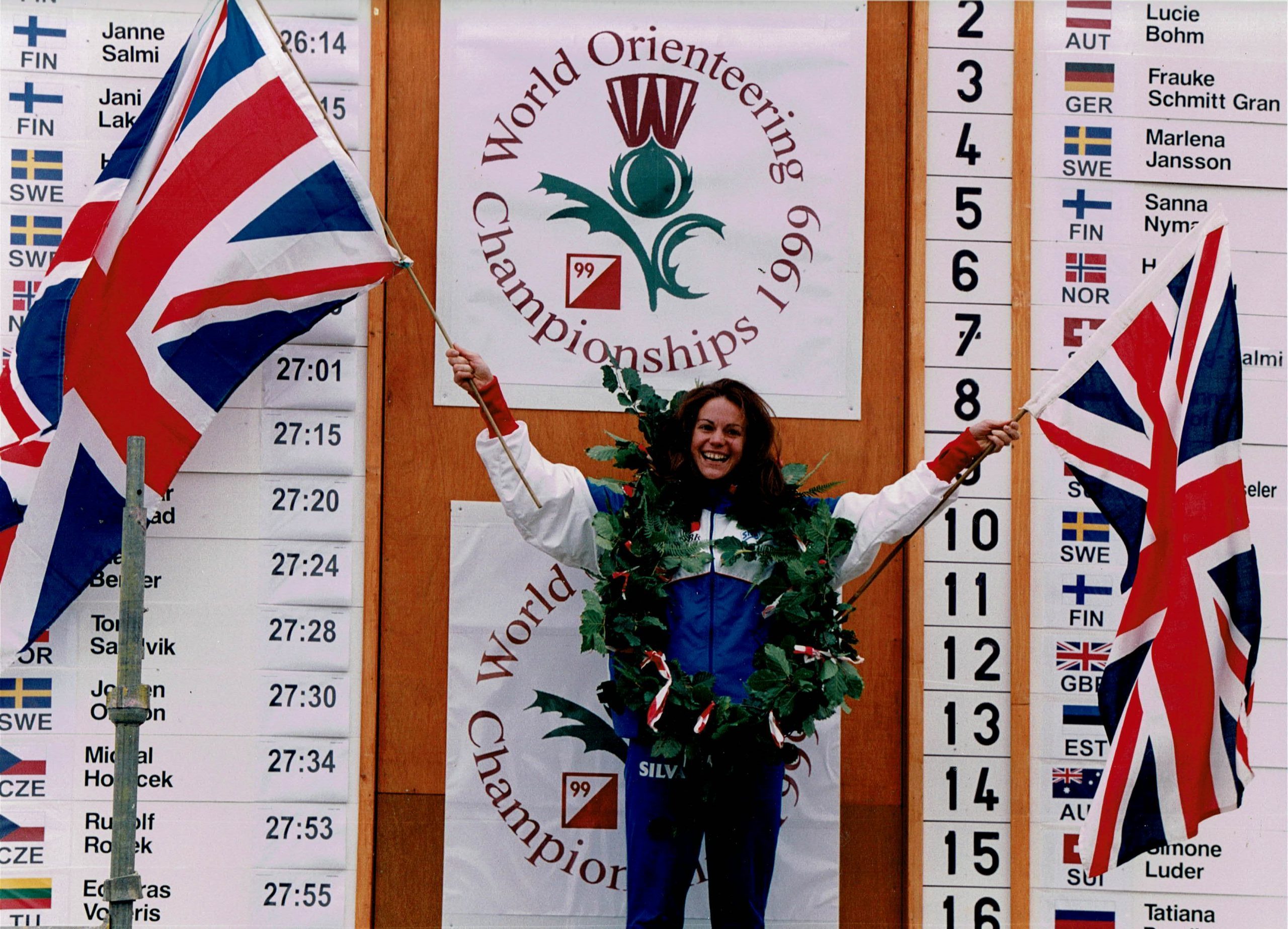 In June ONZ announced the Southern Cross team and staff which we had hoped would be travelling to Australia to compete in the Australian Schools Competition.  For the third year in a row, the team included members of the Baker family.  This year the coaching staff also included one of the Baker family.  For those who move in orienteering circles, it was no surprise that Yvette Baker was chosen as a coach for the event.  Many know Yvette as a member of Wellington Orienteering Club for the past 10-15 years.  Some will even have competed against her at the odd nationals.

What many do not know is that Yvette is Britain’s most successful orienteer, and at 16yrs old was the youngest competitor to compete at WOC.  Yvette won British National Titles, World Cup titles, World Championship Titles and was ranked in the top 3-5 places in the world for an entire decade.  Given her background, I thought it would be great to ask Yvette a few questions about her involvement in orienteering, how she found her way to our shores and why she put her hand up to be involved in this year’s Southern Cross Challenge.

How did you get involved in orienteering?
My father picked up orienteering in his early 30s and it became a family thing.  I started when I was 6 or 7 years old as did my brother and sisters.  I had an older brother and sister who were twins and a younger sister.  My older siblings were keen orienteers but my younger sister – not so much.  For her conversations around the dinner table must have been quite painful!

When did you realise you were good at orienteering?
When we competed, there were no W10 or M10 categories so my brother and sisters and I started in the equivalent to the W12 and M12 categories.  By nine years old, despite coming last in the Swiss-5-Days, I was beating 12yr olds in the UK on a regular basis, and at WOC 1976  in Scotland, stood in awe of Liisa Veijalainen as she stormed up the finish chute to win Gold, before turning to my mother and saying “I’m going to be World Champion like her one day”. The typical motherly “Yes dear” response, didn’t dampen my enthusiasm, and my older twin brother and sister and I all went on to win national titles in the 12 and 14yr grades.

When did you get selected in a representative team?
I was 14yrs old when I was selected for the English team to compete in the Home Internationals – a competition between England, Wales, Scotland and Ireland.  That same year I was selected for the U21 International (the unofficial European Champs and the forerunner to JWOC).  At the time the event was a very Eurocentric competition without a truly international feel to – there was a maximum of about ten countries involved – Finland, Norway, Sweden, Switzerland, Austria, Britain, France…

When did you step up to Senior ranks?
My first WOC was in 1983 Zalaegerszeq, Hungary when I was 16yrs old.  I remember running well enough in trails for selection despite my age and maybe because of my age, was undaunted and very happy to be going.  At the time WOC was bi-annual and Britain had a policy of selecting five runners.  The top four would run in the individual races and then the number four individual would be replaced by the 5th ranked athlete for the relay.  In 1983 that 5th based runner was me.

Two years later I attended WOC again, this time in Bendigo, Australia.  At the time the format was a relay and single individual race – “the Classic” (closest to what we would now call a long).  I finished 13th in my first individual race, running clean but steady in one of the most fantastically technical and well mapped forests I’d ever run in (Kooyoora State Park) and Britain finished 7th in the relay.

Success on the World Stage
After WOC 85, I knew I was on track to be a good senior in a few years’ time, when I’d be stronger and training harder, but also knew I would need to speed up my navigation. So I took a gap year after high school, and spent 3 months mapping in the USA followed by the first 6 months of 1986 au-pairing in Sweden for Per Elfström who was the editor of Skogsport (the Swedish Orienteering Magazine). There, I x-c skied for 3 months and when the snow melted after the Chernobyl disaster, I taught myself to simplify and run hard in terrain. Despite some poor early season World Cup performances with lots of mistakes, the gap year was a success, as later in July, I placed 3rd in the Junior International in Hungary, and a week later I won my first World Cup Race in France. It was a bit of a fluke win, as I was generally still 10 minutes off the pace to the usual winners, but there’s nothing like success for building confidence, and I knew I’d improved during my time in Sweden, and I knew I could gain those minutes as I got older.

At the end of 4 years at university, it was my victory at the 1990 Nordic Championships in Fanø, Denmark that I consider my breakthrough performance.  The Nordic Championships were considered a bigger test for most European Nationals than the World Cup.  One of the main reasons for this was that the core nations were each allowed nine entrants into the individual races instead of the four allowed at the World Cup at the time.  Britain was allowed to compete (although not with a full nine athletes).  The win against the depth of athletes in the Nordic Championships confirmed me as one of the top orienteers in the world.

In 1992 I managed to do enough across the eight events to finish 3rd overall in the World Cup.  At the time I was spending around four months a year travelling with orienteering.

World Cup and World Championships took place in alternate years so from then on things really took off with a Bronze in WOC in Westpoint, USA in 1993, 2nd overall in the 1994 World Cup (that had events in New Zealand and Australia), two silvers in the 1995 WOC in Germany in the Classic and Short.

I failed to medal at WOC in 1997, having not quite managed to get back to full fitness after a periosteal strip operation in 1996 to fix shin splints, which had prevented me from training on roads for 10 years, and was considering slowly winding-down post WOC 1999 but was still chasing the elusive gold medal.  Initially I was disappointed to find out that WOC 1999 was being hosted in Scotland.  Part of me wanted to prove that I could win on foreign soil.  In 1999 WOC was hosted in Inverness in the Scottish Highlands.  Despite my desire to prove that I could win WOC Gold overseas, 1999 proved to be my year to stand atop the podium and the home country support made the event all-the-more special in what was the highest achievement in my international orienteering carrier.

Although I was not as active at the top level of my sport in the 2000s, I did pick up my final international medals in the individual (classic) and relay at the 2000 European Championships in Truskavets in the Ukraine.

Life outside orienteering
I grew up just west of London, which is much better for orienteering than most people think, but when I finished high school and had started orienteering internationally, I moved to study and orienteer.  I gained degrees at the Universities of Edinburgh, Keele and London before moving to Denmark where I lived, orienteered and completed my PHD from 1998 to the early 2000s.  As well as Orienteering, I was a track runner and a not very good but enthusiastic hockey player while at high school, spent many weekends rock climbing in the hills while at university, and also  represented Britain in mountain running for several years. Needless to say I kept busy.

I learnt very early that I had to pick and choose how much orienteering I was able to commit to and I noticed as far back as my mid-late teens that my performances became flat if I was trying to compete at an elite level for more than four or five months at a time.

In 2005 my husband was offered a job at Victoria University so we moved to New Zealand with the first of our three children.  I joined Wellington Orienteering Club shortly after arriving in New Zealand and have been a member ever since.  Since moving here, I have volunteered in various capacities at my local club while my children have grown up.  Like their mother, they have been involved in orienteering from an early age – doing string courses since they could walk and navigating themselves around the course since they were six or seven years old.

Coaching
I have coached orienteering since my university days, but since becoming a mum, it has taken a while before my children have been old enough for me to be able to commit to coaching again. Taking kids to Australia and watching them be challenged and inspired the same way I was at their age, would’ve been awesome. Next time….

One thing I have been amazed about in New Zealand is the age at which children become involved in coaching.  When I was brought up, juniors just did not coach, that was the domain of seniors.  Here I find my children actively involved in coaching and umpiring in their teens, something that I see as a fantastic life skill and something I encourage others to get involved with.

Advice to budding orienteers
There’s nothing like running through beautiful forests and spiking controls at speed to make you want to keep orienteering, so never stop practicing your skills, because when you’re confident you can rely on any combination of your skills 100%, you’ll fly.

Join a running / athletics club. The training you need to be a top orienteer is the same as a middle distance track / xc / 10km/ half marathon runner, and you’ll have heaps more people to do those hard interval sessions with, and learn heaps of training methods for the future.

Keep up with multiple sports, but be aware that doing every session for each sport might be too much, so be prepared to cut some sessions out.

Listen to your coaches and give everything they suggest a go. It might not work for you, but as you get older you’ll have the knowledge and experience to know what does work and how to implement it.