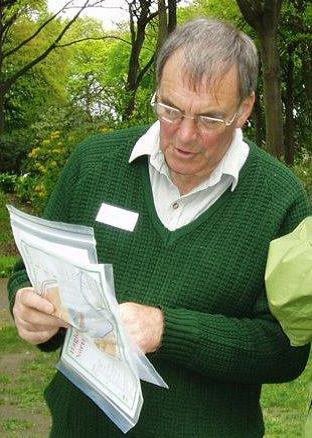 John Davies was awarded the Silva Award for services to orienteering in New Zealand (NZ) for 1984 and was made a life member of the New Zealand Orienteering Federation (NZOF) in 1992. John received these awards because he was passionate about orienteering and therefore gave unstintingly of his time. Volunteering seemed to be in his blood. Michael Wood recalls that although the World Cup 1994 race was hosted and principally organised by the Auckland clubs, when John and Robyn arrived to watch the race, they immediately found areas where they could help out and did so. Sadly John passed away on Easter Monday (21 April), age 73.

JD, as he was popularly known as, was also a great conversationalist, who had the ability to make the person he was talking to feel important.
John was the second recipient of the Silva Award, after Ralph King, and in the dozen years since he and wife, Robyn, had begun involvement in orienteering in NZ, he had founded the Pinelands club and played a part in the foundation of at least three other clubs, been club president, Central Districts association president, NZOF secretary and NZOF president.

The foundations for the Pinelands club in South Waikato were initiated by John and Robyn, after they returned to NZ in 1972. They had begun orienteering in Scotland in 1970 and then Canada the following year. Teaching at Putaruru High School, they began their initial promotion of orienteering in Putaruru and Tokoroa with an event in April 1973 and a year later, April 1974, the club was formed with John as president. In 1975 half its members were juniors and in 1976 it reached 85 members.

In conjunction with Frank and Robyn Smith in Ngaruawahia, and Tony and Margaret Nichols in Tauranga, the Davies worked together across the Waikato-Bay of Plenty area promoting the sport both to the general public and in schools. The result was that the years 1974 and 1975 were big development years for orienteering in New Zealand with upwards of 150 attending events in the Waikato. Also in 1975, John led Pinelands to host the NZ championships, at which the club introduced an inter-club relay championship.

Further south, the Foxton Lions, invited John Davies to map an area at Waiterere. The map was subsequently used in 1975 to promote orienteering in the Manawatu and following a second event in Palmerston North, the Red Kiwis club was formed by the close of the year.

In 1976, Paul McOscar, working for the Christchurch City Council, began planning an orienteering event as part of the Council’s Family Leisure week. John, who had become NZOF secretary in 1975, had also been thinking of the same prospect and during the summer holidays, he and Robyn arrived to help Paul and the council. Two events were held in January 1977 with the result that within a few months Peninsula and Plains Orienteers (PAPO) was formed.

From Putaruru, John and Robyn moved to Taupo and then in the second half of the 1980s to Hutt Valley. There John became the Hutt Valley club’s equipment officer. In 1989, they moved back to John’s home town of Christchurch, where they joined PAPO. The club hosted its first NZ championships in 1992, for which John controlled the relays. Ten years later he mapped and planned the national long distance championships at Irishman’s Creek. John was president of the club in 1993 and again for the three years 1998-2000, being on the committee throughout until 2005. Already a life member of Pinelands he was made a life member of PAPO in 2001.

John was NZOF secretary 1975-1979, NZOF president 1982-85, chairman 1979-80, and again 1988-91, and vice-chairman 1991-92. One of John’s contributions to the development of the sport was, in 1977, formalising the range of NZOF sub committees and officers and their election. The committees he proposed were Fixtures, Technical, Finance, Publicity and Promotions, Selectors, plus a Property Officer and a Magazine Editor. In 1986-87, John himself became convenor of the Technical Committee, as well as Training Squad coordinator.

John and Robyn had both been active in sport at Canterbury University and in the early 1960s John was a well-performed track athlete, to the extent that he was one of the invited field that raced against Peter Snell at Lancaster Park in February 1962, when Snell broke the world record for 800 metres.

John’s competitive ability continued into orienteering, where he competed right through to the M70 grade. He represented NZ at the World Orienteering Championships in 1976 in Great Britain, where he also doubled as team manager. He also represented NZ in the Australia-New Zealand challenge on many occasions and won the Brighouse Trophy for 1983 in the (then) M43 grade.

Robyn also represented NZ, as well as being a NZ champion. Both their children, Michael and Jan, orienteered with Jan representing NZ at elite level. Just a couple of weeks before his death, John was proud to see the oldest of his four grandchildren, Sophie Harrison, named in the team for the 2014 Junior World Championships.

John never stopped contributing to our sport with his contribution covering vision, governance, administration, mapping, planning, controlling, managing equipment, digging toilets and mentoring others. His presence and enthusiasm will be sadly missed – but not forgotten.