With the adoption of the new Constitution at the AGM, it’s effectively goodbye to the terms President and Vice President under the former Constitution and welcome to the new Board. The Board is charged with electing a Chairperson to lead the Board over a twelve month period – and at our first meeting during April, I was tasked with this role. So a new title for my editorial – and I’ll do my very best to ensure that the Board continues its good work during the year ahead.

Still with the AGM – the outcome from the remits submitted by clubs required ONZ to effectively redraft Policy G6 (Athlete Contribution Fee) and also look at changes to grades for the NZ Secondary Schools events. It was accepted that G6 was poorly worded with little logic or reasoning being communicated over its intent, whilst there had been a fair amount of groundswell for a change to NZSS grades. The Junior Development Committee has produced a paper on NZSS grades which has been circulated with a request for feedback by the 1 June 2016. Policy G6 has seen significant revision and we should be in a position to issue a draft for comment very shortly.

During the last week of April, I managed to get over to Wellington to attend Graham Fortune’s Memorial Service. The attendance reflected Graham’s extensive time with Foreign Affairs and Defence and there were presentations from senior civil servants which highlighted his analytical strengths, his leadership and management skills and quality of character. Dick Dinsdale, Wellington OC’s President was also afforded with the opportunity to talk about Graham’s passion for orienteering. Dick highlighted his numerous grade successes both at National level and representing New Zealand and his time chairing the 2013 Oceania and World Cup Steering Group and his term as Vice President of NZOF. My lasting memory of Graham will be the time he gave to help newcomers at club event and get them underway and this was strongly reflected within Dick’s address.

From a sad note to one of congratulations – to all those selected for WOC, JWOC and the World University Games. I understand that a very successful training week was held prior to the ANZAC 16 event hosted by Red Kiwi in preparation for these future events.

Finally another plea – we still have vacancies covering a number of key positions including a seat on the ONZ Board, the Event Liaison position, and a vacancy on the Junior Development Committee. Filling these positions is vital to the effective operation of ONZ and would make life so much easier for existing committees  – so please ask yourself if you could help in any way.

Congratulations to our representative orienteers

Congratulations to our representative orienteers who have been named to represent NZ at WOC, JWOC and WUOC.

The deadline for Event Liaison and JDC member applications has been extended so we can get a suitable candidate.

In 2015, a new High Performance Plan was developed which looked at the pathway for orienteers.  As part of the plan, the following was stated:

To consider how athletes need to develop from new juniors to JWOC and through to successful competition at senior international level it is pertinent to consider the hierarchy of orienteering events. Such a hierarchy considered appropriate for the development of New Zealand orienteers is shown in Figure 1. (below) …. The aim of this is to provide a clear indication of the stages of progress which an incoming, or indeed, any, athlete needs to make on the journey from new junior to senior international level.

The Plan identified the pathway for orienteers placing competitions within a tiered structure representing their relative levels of importance and experience required to succeed.

As part of this process, which was undertaken with thorough consultation by the Performance Leader with selectors, Junior Development Committee, past and current elite athletes, coaches and endorsed by ONZ Council, each competition to level of competition was reviewed in relation to others.  You will see in Figure 1, the Australian Schools Championship has been identified as a tier 6 event (the top of the National Schools Championships and regional championships cluster) whereas JWOC is a further 4 tiers higher in the Top Junior International tier, above Oceania, Australian & NZ Championships.

The HP Plan went on to say

The best will also at this stage have the opportunity for the first taste of international competition through the Australian Schools Championships, and will also be competing successfully at New Zealand, and possibly Australian and Oceania M/W18 level, as well as seeking selection for JWOC.

As such, the Australian Schools Championship has been recognised as a development, not elite junior competition.  Allowing junior orienteers to compete in these championships, once they have competed in JWOC is seen as not only a backward step for the athlete in terms of them competing well below their personal bests, but also more importantly creating a glass ceiling for other young aspiring orienteers.

The rapid growth in junior orienteering is something we are all very proud of and wish to develop and enhance.  In order to achieve this we need to enable as many junior orienteers as possible the opportunity to experience international competition at the appropriate level.

The ONZ Council has endorsed the High Performance Plan as it believes we need to celebrate the successes of our athletes in the past by providing for the junior orienteers of the future.  We do not wish to see this potential being limited by bottlenecks within team selections.  The Council sees the exclusion of JWOC selections from the NZSS team as providing a key opportunity for some of our other budding young orienteers to gain some valuable international experience.

Young orienteers will gain from the new High Performance Plan.  A number have been named as associates to the National U23 Squad in recognition of their orienteering skills.  The options for these young orienteers are now beyond competitions such as the Australian Schools Championship and are now in the realm of new initiatives such as the Junior Pinestars team for the Queen’s Birthday event and beyond.

The decision to exclude the JWOC selected athletes from the Australian Schools Championship team should be seen, as we do at ONZ, as a success and celebration of these athletes transition from schools champions to international junior elites.

ONZ will not be withdrawing the selection notice.  We stand by the decisions made within the High Performance Plan and believe this is for the betterment of junior orienteering in NZ. 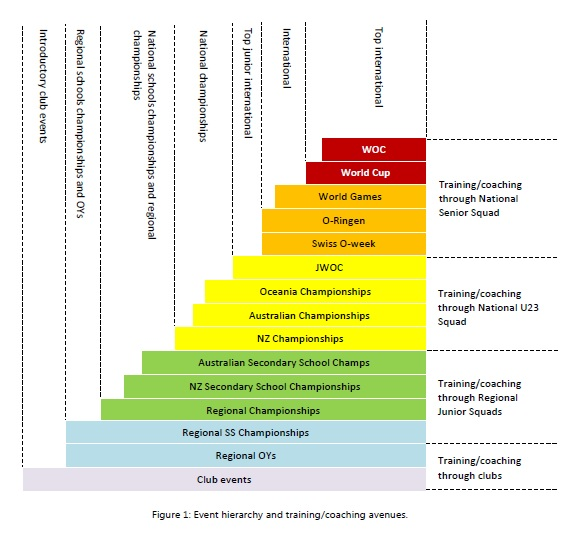 World Orienteering Day is fast approaching. In two weeks’ time, orienteers all over the world will be putting the finishing touches to their events in anticipation for the big day. The project has gathered momentum, with milestones passed and considerable international support, for example in the form of a letter from the President of the International Olympic Committee, Thomas Bach.

In the latest issue of the WOD Newsletter, people from all over the world continue to inspire with their creativity and hard work in making the World Orienteering Day a success. Read about kids-O in Buenos Aires, TempO in Hong Kong, Labyrinth-O in Russia, and much more.

A wee reminder to ALL orienteers the WMG2017 embargoes apply to everyone, regardless of whether you are a masters orienteer or not.  Please ensure you respect and abide by these embargoes.  Click here to find out about the embargoes.

Registrations for WMG2017 are now open.

Registrations for Oceania are now open.

Can’t Compete at World Masters Games, but still want to be involved?

Join the ‘Pit Crew’ and be part of the 4,000 strong team of volunteers that will make it happen.

The ‘Pit Crew’ are at the heart of World Masters Games 2017. They are the support team helping 25,000 athletes achieve their personal best, and play a vital role in ensuring the Games run smoothly and are an enjoyable experience for all.

We are looking for Pit Crew volunteers who:

Health and Safety Resources, Tools and Training for the Sector

Now that the legislation has passed, we are developing a number of resources, tools, and training courses for you to use. The first of these is an online training course for paid and volunteer workers on our learning platform ‘Sport Tutor’.

The course was developed in partnership with Skills Active, is free to enrol and complete, and learners can complete it on a computer, tablet or smartphone. Learners can also have the 3 credits for this Level 1 unit standard registered on their NZQA Record of Learning for a fee.

To view the course outline go to: www.sporttutor.nz and click on Catalogue > All catalogues > Sport Safe

SportNZ are also developing an online organisation self-assessment tool that organisations can use to assess how well they meet good health and safety practices. The module will be available in February.

ONZ has updated its e-newsletter database which now allows you to chose which areas are of special interest to you – such as High Performance, Technical, Mapping.