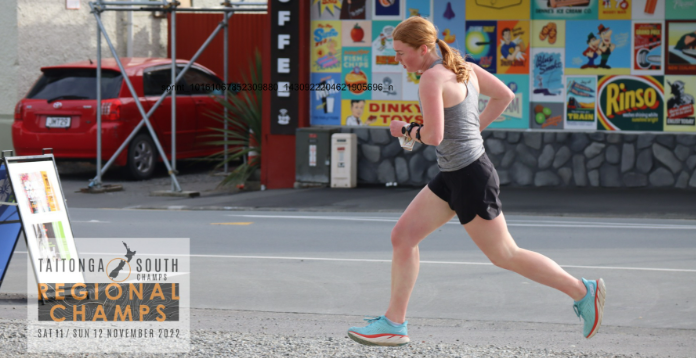 Sprint event  |  The Taitonga South Island Champs began with an evening sprint in Geraldine which gave runners a rare chance to run in a town centre map but also included parklands and a secondary school. Running conditions were perfect in the cool evening air allowing competitors to ease into the hotter days awaiting them in Tekapo. The elite grades were taken out by North Island expats Lizzie Ingham and Matt Ogden. Notable results were sisters Anna and Katherine Babbington finishing two seconds apart in W20 and Aaron Prince beginning his weekend long battle with Tane Cambridge by finishing second equal. A good showing by Dunedin club members Kev Knoles and Antonia Wood who took out the 50’s age class. Sprint event recap by Joseph Lynch

Middle event  |  Taitonga Middle Distance Champs was a journey, or should we say multiple journeys once we found out even more of Maunders had been cut down. Taping control sights from a cellphone was novel but courses were planned and set.

The courses were planned short, which was intentional given the overlap with the long. Unfortunately for the 60s this meant the course was a little too short. Given the open forest, high speed, repeated change of direction, accurate compass work was the goal.  5-10s errors in a deep field would affect outcomes. In both 60s grades the title was decided in seconds, rather than minutes. Alister Metherell won the M60’s by a mere 2s without winning a single leg split!

Course2 was also a great race between Lizzie Ingham and Katharine Babbington. The result came down to an exit direction when both athletes were fatigued in the second half of the course. Check out their race on livelox https://www.livelox.com/Viewer/South-Island-Champs-Middle/W21E?classId=545979

It was a pleasure to set the courses. Thanks to all the helpers for their various roles, making the day so smooth. Special thanks to Jenni Adams for providing extra oversight and thought that enhanced the courses.  Middle event recap by Matt Bixley

Long event | Planning a long distance event at Tekapo initially seemed a bit of a challenge given the size of the map. Luckily the unexpected long weekend in September was the perfect opportunity to do some map extending, and we managed to whip up some sufficiently long courses.

The longer courses did a loop of the northern extension, where the vegetation had sprung up since the mapping two months previously. Thorny bushes had arrived, in addition to the mapped Matagouri, temporarily disorientating a few runners. After the northern excursion (and some great views up to the high peaks behind Tekapo for those less focused on their maps) longer course competitors entered the main block of forest, rejoining the shorter red and orange courses. Here, everyone could enjoy Tekapo’s mix of vague white areas and some thicker green bits that keep you on your toes.

There was some tight racing in many grades. On the white course Caitlyn Thrower had the fastest time while Jeremy Freeman was the best of the men, and the yellow was won by Loius Van Keulen and Millie Burgess. Trish Faulker resoundingly took out the W80 grade with a time just over the hour. In the hotly contested M60 grade hometown favourite (but now Greymouth Orienteering Club member) Peter Cleary was leading early but had to settle for fourth with Martin Crosby taking the win half a minute in front of Roger Coombs. Joe and Lizzie also had decent runs in elites. Lucky Joe made it to Tekapo to race after almost getting arrested in Geraldine whilst picking up controls (a story for another day). Maps and routes for those that have uploaded can be seen at https://www.livelox.com/Events/Show/86968/South-Island-Champs-Long

Thanks to everyone who helped, particularly Jan Harrison who organised the weekend, and was chief organiser each day.