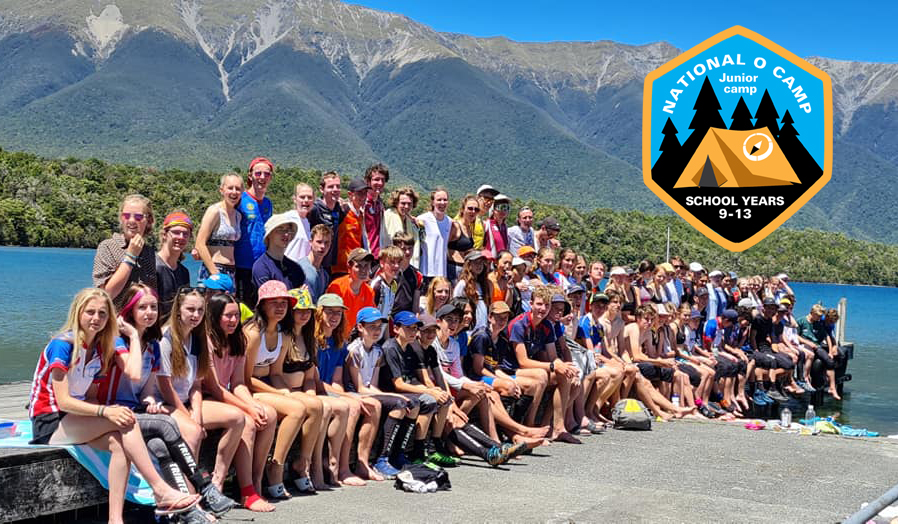 Not many countries around the world could have a gathering this big and also safely accommodate them to participate in intensive sport coaching. In NZ, we are lucky enough for 2020 to have ended well with 80 orienteering juniors testing their running and map skills in hot weather on a variety of terrain in the Nelson and Tasman areas. Many thanks to Briana Steven as head coach with Jean Cory-Wright who managed to coach the coaches to take the juniors through six days of exhaustive non-stop training. Junior camp connects young orienteers with challenges, competition and provides skills for them to work through. It was a well balanced camp with teenagers from all over the country and a really good cooperative atmosphere. It was a perfect ending to a year that was a bit disruptive.

Here are some of the maps, and some feedback from participants at the 2020 Junior camp about what they enjoyed:

Camp champs
The junior camp champs long was held at Rabbit Island on day 5 of junior camp (17th of December). The camp champs was all about training for big competitions like JWOC or similar, focussing on what it would be like on a real competition day. At the start of the day everyone had to go to the quarantine area. This was to ensure that nobody cheated or looked at the maps before running. Around 20 minutes before their start time competitors would leave the quarantine individually and walk 1km to the start. After waiting at the start competitors would wait to be called and then put through a silent four minute start box process. There were four courses one each respectively for: Junior boys, junior girls, senior boys and senior girls. The courses were interesting and over varied terrain with the start and end of the course in a pine forest and the middle section of the course being round a open grass camp site. At the end of the course Competitors would run down a finish shoot made of two lines of vans to punch the finish. The winners were as follows:

After the race, some went for a swim in the sea before heading back to camp in the mini vans.
The winners of senior boys and girls were selected to become the judges for Mr and Mrs Camp – which was a comedy talent show held in the evening.
By James Wright  |  Peninsula and Plains Orienteers

One of my favourite parts of the camp was at Teetotal, we were put into pairs for the Star Relay, in was fun navigating through the tricky bush, Ferguson and I got third. The coaches were super helpful and I learnt a lot.
By Tide Fa’avae  |  Nelson Orienteering Club

I enjoyed the West Bay trainings, the bearing session was hard but fun, it was a hot day so afterwards we swam in the lake with the eels. Having lots of training and racing was cool.
By Zefa Fa’avae  |  Nelson Orienteering Club

Recently 80 secondary school orienteers from around New Zealand attended the ONZ Junior Training Camp that was held from the 13th till the 18th of December at Teapot Valley Christian Camp. The camp kicked off on Sunday afternoon with an intro course on the dunes at Tahunanui spit. There were two courses of slightly different lengths that started on open dunes and then crossed the road onto some mud flats and a little bit of bush. After this everybody hopped into vans and we travelled to Teapot Valley camp for the first time. Bunkrooms were then read out and after exploring the camp we had some delicious curry for dinner.
Later in the evening we gathered upstairs for the camp briefing and we found out the theme of the camp was ‘Around the world in 30k’s’. Everyone then split off into their training groups. These were sorted by age and ability and were all named after different countries. Each group had two coaches who were university students from around the country who have loads of experience and have been to big competitions such as JWOC (Junior World Orienteering Championships).
The first full day was pine forest training at Tunnicliff only a 10-minute drive down the road but that ended up way longer because our van didn’t start. Jenni our driver called AA and amazingly they turned up in only half an hour,  so luckily we still made it in time to join our groups for the first exercises which for my group was map walk. We did this to get a feel for the terrain as well as what features we could rely on for our nav. Tunnicliff forest was very steep and there were lots of contours that were mapped very accurately.
As for the vegetation pretty much the entire map was pine forest with varying amounts of undergrowth. This had changed quite a lot though since mapping so we decided not to rely too much on the runnability of the undergrowth and things like that. The next task was a short course but the only the contour lines were mapped. With no vegetation shown we had to practice using contour which is a great skill to have. The final exercise that morning was a relocation task to practice finding where you are on the map by using unique features. After we had finished this we went back to the vans for lunch.
Next on the agenda was what is called the ‘flying mile’. This is effectively a 1.6km course that is downhill so that you can run fast like you would in a sprint. We all walked up to the top of Tunnicliff forest and were told to line up in alphabetical order of first names, one line for girls one line for boys. They then began starting people with thirty second intervals one girl then boy. Everyone did the same course that was made up of 7 controls although the coaches also but up dummy controls to make sure we were checking our control descriptions.
There were multiple route choices on the course but control 3 to 4 was one that was very interesting. The options were to either go straight down a valley that was filled with pretty dense bush with lots of vines and supplejack or to go a longer route around the edge of the patch of green and come at the control from below. The majority went around the track because you were able to run fast and the people who did this beat most of the ones who went straight apart from Riley who won the leg by going direct.
Later in the course, Nika who I had caught up with, and I were fooled by a dummy control at number 6. There were two earth banks that were along a creek and we had gone to the higher one instead of the one that had the control. On our way out of the control Zefa came zooming past us and began running down the creek. As we ran down to the creek Nika spotted a poor tui that Zefa had stood on. To my surprise she picked it up and carried it all the way to the finish. When we got there she put it down on the grass and we realised that its neck was broken. After some procrastination we decided to put it out of its misery by ending its life. But anyway, overall it was a great first day to the camp and a real challenge as well. We made our way back to camp and in the evening we did a quiz which was heaps of fun.