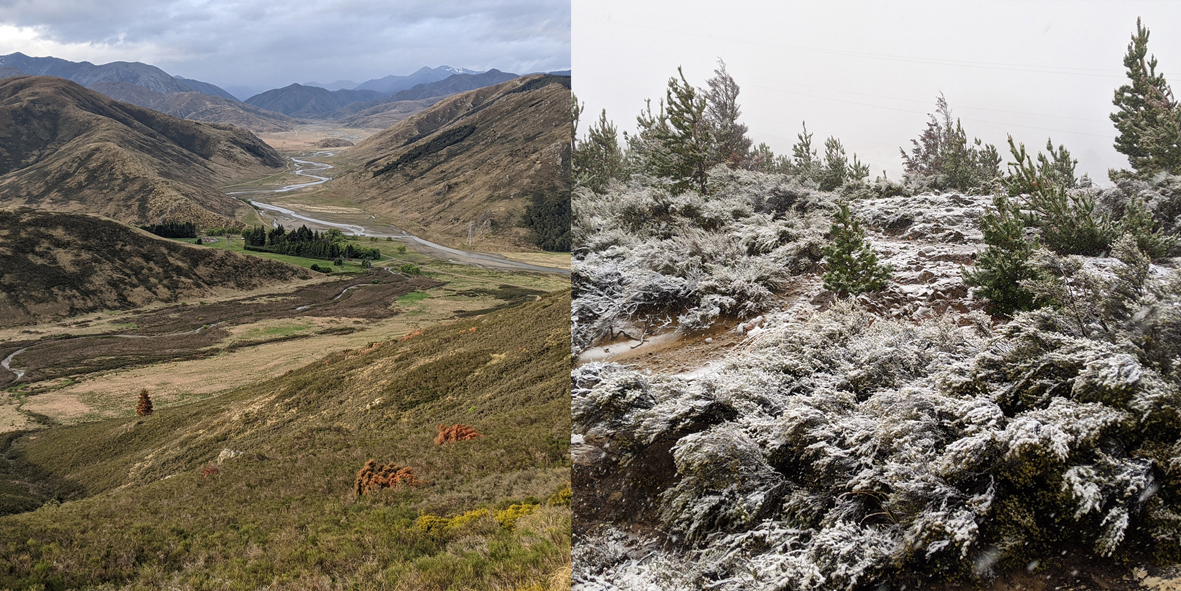 The event was held in Hanmer Springs, and this proved to be a great location with lots of steep hills, rugged tops and even some forestry tracks for those less keen on steep terrain (sadly there were no controls in the hot pools). The map covered a large area and Douglas Woods, Colin Dixon and their band of dedicated helpers must have spent many weekends GPSing tracks, checking control locations and then placing the controls. Their dedication paid off because the map was great, the controls were accurate and it was clear they’d put effort into finding interesting control locations and making sure that good planning would be rewarded.

This year juniors got free entry which is a great way to encourage younger competitors and will hopefully be repeated at future NZ champs. Juniors made up 15% of the field of almost 300 which is up on other years. It will be great to watch these teams keep improving in the coming years and no doubt show the older competitors a thing or two.

There were a number of strong teams and it was going to be interesting to see how they would all go. As race weekend approached so did the cooler weather. By race day the weather forecast included rain, lots of it, wind, lots of it and as the cherry on top, snow at higher elevations. Things were definitely going to be more interesting than normal. The most closely fought grade appeared to be open mixed with Georgia Whitla and Tane Cambridge competing against Tim Farrant and Jo Williams. Georgia and Tane have won 6 NZ champs between then and Tim has also won 6 NZ champs so they are very experienced and evenly matched. Both teams are known for planning good routes and are evenly matched speed wise too so it was likely the outcome would come down to how well they executed their plans.
After 8hrs of fair weather racing Tim and Jo had the slenderest of leads, a mere 30pts. As darkness fell and the rain set in they ended up on the same series of controls neck and neck for 3hrs with both teams trying to sneak away from the other, Georgia and Tane finally got a small jump on Tim and Jo around midnight. The weather continued to deteriorate and even at low elevations it was now bitterly cold due to the strong winds. These two teams continued relentlessly through the night and at 5:55am their scores were even! However with daylight came worsening weather, it was now snowing on the upper parts of the course. This would prove to be decisive, which team was willing to ignore the abysmal weather, frozen hands and saturated clothing? Were either of them foolhardy enough to head even higher into the snow, wind and mist to get a few high value controls? In the end both teams chose safety over foolhardiness, however this hurt Georgia and Tane more because there are less options for adjusting their route. So after 20hrs+ of racing Tim and Jo get into the lead for the final time. It’s great to see such close racing between teams.

Another notable entry was “The Omen” of Matt Ogden and Duncan Morrison, both well known for their orienteering prowess and making their debut at a 24hr rogaine. Would they demolish the field with their raw speed and expert navigation or would the 24hrs wear them down? In the end the appeal of many more hours in the cold lost out to the thoughts of a nice warm bed and they headed back early. Potentially one of the smarter teams out there?

It was great to see how teams successfully handled the less than ideal weather. A number of teams returned to camp for a sleep while others hunkered down at the bush cafe, still others altered their routes to avoid the worst of the weather and keep themselves safe. And once again I’d really like to thank the many people involved in organising the event.
by Greig Hamilton

The New Zealand Rogaine Championships were held in Hanmer on the 7th and 8th of November. There was a 24hr, a 15hr and a 6hr option. We competed with James Wright in the 6hr mixed category along with 28 other teams. The forecast was for rain so everyone was double checking their raincoats and wet-weather gear before heading out. Our map for the rogaine was centered around Mt Isobel area but the 15 and 24hr rogaines also had a second side with part of the Clarence River and some more hills (The part designed for Chris Forne).

It was quite hard doing a six hour rogaine on such a large scale map that was designed for a 24hr rogaine. The distance we had to travel for each control was much further than we were used to. We were only able to cover a fraction of our side of the map. Our route ended up going along the base of Mt Isobel, up a steep ridge, along the tops and back down along a logging road. The first three hours of the course were relatively good weather with some rain coming in towards the end so on the shorter course we were lucky to escape the worst of it (those doing the longer races were not so lucky). We quickly found that the light green on topo maps is NOT the same as light green on an orienteering map (I wouldn’t describe it as ‘slow running’) when we made a route error that cost us at least half an hour.  As we moved on across the tops we started to get pretty tired and the cloud and rain began to set in resulting in a little bit of team grumbling. We also managed to go down the wrong spur which turned out to be quite handy as we grabbed extra 50 points on the way back to our planned route. Apart from our slightly shaky start the course went pretty well for us.

We all enjoyed the navigational challenge as well as the satisfaction of going on an adventure. The final ten minutes were a desperate sprint for us as we tried to finish before the cut off time which we managed (just). It was really cool to see lots of junior teams competing in the event, especially seeing some competing in the longer races which shows us what we can aim for.

We placed 9th overall and 1st Junior team for the 6hr with 650 points. Overall it was a really fun event in a great location with the weather not dampening the spirits. Congratulations to all the teams who competed, especially the 24hr participants. I’m sure we all can’t wait to return next year for another challenge.