Another silver for Tim in KO sprint!
By Malcolm Ingham - Sun 29 May 2022 9:38am
World Cup, High Performance 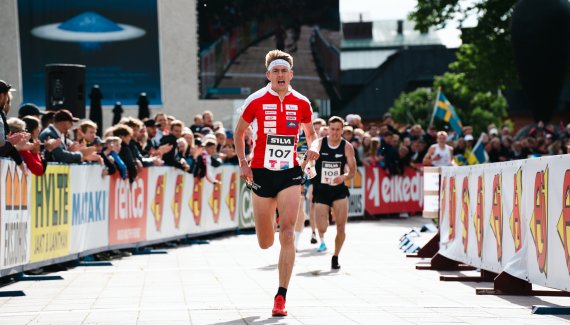 Tim Robertson has produced another silver medal performance in the knock-out sprint at the orienteering World Cup held overnight in Boras Sweden. With qualification perhaps the hardest part of the KO sprint at this level, Tim had hearts in mouths in the morning qualification heats where, with only the top 12 to qualify, he finished 10th in his heat. There was another close shave in the semi-final with a sprint finish between Tim, Matthias Kyburz of Switzerland and Norway’s Eirik Langedal Breivik, with Breivik the one to miss out on the final. With the semi-finals using the map choice method of splitting there was clearly controversy over semi-final 3 with the top 3, rather than only 2, progressing to the final after what IOF describe as “a complaint”.

In the closely contested final in which there was no splitting, the lead changed hands several times, Tim led at the arena run-through prior to the short final loop but, after a complex route choice to control 11, Kyburz hit the front and held on to win by 1 second in a time of 7:21. In a desperate race for the minor placings Tim out-sprinted Swedes August Mollen and Martin Regborn and Norway’s Kasper Fosser, winner of Thursday’s individual race.

The women’s final featured 4 Swedes, but it was Britain’s Megan Carter-Davis who led for most of the race, before, surprise, surprise, Tove Alexandersson caught her and then pulled away on the final loop.

It was a tough morning for Joseph Lynch and Penelope Salmon who both failed to make it through the qualifying heats. The intensity of competition at this level is shown by the fact that in the 3 men’s heats the final qualifier finished only 20-30 seconds behind the fastest. although the gap was larger in the women’s heats it was still only 40-60 seconds.