The Australian Bushrangers have taken out the second leg of the ANZ Test Match after the Australian Long Distance Championships held in South Australia. With no elite competitors from NZL it was left to Oak Jones and Jason Bond, 3rd and 5th respectively in M20E, and Briana Steven And Katie Cory-Wright, 2nd and 3rd in W20E, to fly the flag from this side of the Tasman. The overall score after the Oz Championship events was AUS 253 NZL 173. 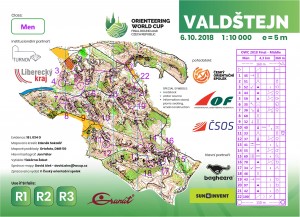 Meanwhile on the other side of the world, the four New Zealand entrants were amid a maze of sandstone rocks in the middle distance race at Round 4 of the World Cup. Only Tim Robertson escaped relatively unscathed in a commendable 20th place. Toby Scott was 57th in the men’s field, while Laura Roberston and Lizzie Ingham both had days to forget finishing 67th and 69th on the 3.8 km, 305 m climb women’s course.

The previous day had not been particularly auspicious for the sprint relay team either. After Laura and Tim were off the pace on the first two legs, Toby picked up 6 places on leg 3 and Lizzie another 5 on leg 4 to pull NZL into 19th place.

The 2019 World Cup finishes tonight with the individual sprint – split into A and B finals based on World Cup standings, of the 4 Kiwis  only Tim races in the A final.

For those at home – a reminder that entries for Labour Weekend close tonight.