June has been a strange month. For me it felt odd to have planned a day of Queen’s Birthday yet not be there to see the outcome – by all accounts a highly successful 3-day event for which Wellington and Hutt Valley clubs deserve full credit. Instead I have had the chance to look over both the Danish HP system and our own arrangements for WOC2016. Short reports on both are included below. Now we turn to JWOC in early July as we look to see if NZL can continue its remarkable run of success in this event over the last few years.

Queen’s Birthday saw the first non-sprint WRE events on the 2016 calendar and, with the visiting Australian team boosting the field the chance for Kiwi athletes to gain valuable points which can become very important in the context of starting position at events such as WOC. The three events also included the home leg of the Pinestars-Bushrangers Test Match, run at both elite and junior level. The final entry of nearly 450, albeit boosted by the Junior Regional Challenge, was one of the largest for some time, and shows the enduring popularity of Waitarere Forest and its surrounds, and the attraction of attempting to conquer the extended version of Waikawa (Manga Pirau).

ith JWOC approaching rapidly there were particularly strong performances from Tommy Hayes, Alice Tilley and Sonia Hollands, while in the elite grades Gene Beveridge and Imogene Scott showed they are on track for WOC later in the year. In the Test Match it was New Zealand all the way with convincing wins in all four grades on all three days, and especially so in the Junior grades.

Queen’s Birthday was of course also the final round of the 2016 SuperSeries and after 3 days of close racing the 2016 SuperSeries winners emerged as Nick Hann (Senior Men), Penny Kane (Senior Women), Tommy Hayes (Junior Men) and Danielle Goodall (Junior Women). Both Nick and Dani thus retained the titles they won last year, while for Penny, post 2 children, it represents an impressive return to the top, and for Tommy a significant rise from last year’s 5th place. As  previously reported the team competition was narrowly won by the Northerners.

There is of course a slight advantage to be gained in attending all rounds of the SuperSeries, as with 7 events out of 10 to count this gives greater leeway to drop poorer scores. Of the 56 athletes who obtained points in Senior Men, 40 in Senior Women, 30 in Junior Men and 23 in Junior Women only Gene Beveridge and Tessa Ramsden Senior competed in all 10 events in the Senior classes, while in Junior Women 4 athletes did likewise – Alice Tilley, Katie Cory-Wright, Lara Molloy and Ellie Molloy. Several other Juniors ran in all 10 races but split their efforts between the Senior and Junior classes.

A slightly unfortunate factor this year was also that 3 of the 4 rounds were in the lower North Island. This is very much a function of what events clubs are prepared to put on in the relevant period from February to June, and probably needs a bit more forward planning. For 2017 the only round definitely decided will be at the Oceania Championships, so start thinking about what other events can/should be included. For example, for 2017 do we want to extend the SuperSeries out to Labour Weekend when the ONZ Championships will be held?

How the Other Half Lives

In Aarhus for a geophysics conference in early June I had the opportunity, courtesy of Danish head coach Lars Lindström, to look around the Danish HP Centre based in the Sports Science Department at Aarhus University. The HP Centre is the base for the highest level of a multitude of sports coming under the collective banner of Team Danmark. Lars himself 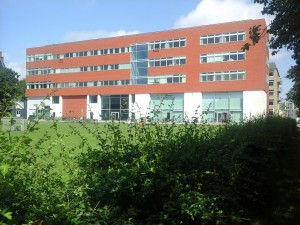 shares an office with 2 other orienteering coaches. Apart from all the usual gymnasium facilities indoors, extensive playing fields outside, and the municipal running track a couple of kilometres away, the facilities include full medical staff, physiotherapist and nutritionist all on-site.

The Danish squad system is very centralized and has the requirement that all members of the senior squad have to be resident at the HP centre, with accommodation blocks literally within about 100 m of the main building. To be part of this system each invited athlete pays 9000 krone (approx. NZ$2000) per year after which everything in the way of travel and entry to overseas training camps, competitions etc. is paid for. (Non-squad members are still eligible for selection in Danish teams but have to pay their own way.) The education system in Denmark means that many of the elite athletes are part-time students, facilitated by the on-campus location and the provision of university staff dedicated to helping make study arrangements go smoothly – for example, they are empowered to arrange exams to be sat whilst away at competitions.

During the competition season there is an 8 am training session every weekday morning – 2 focussing on sprint training, 2 being interval sessions and the other being strength and conditioning. Terrain training is then in the late afternoon/evening generally using the available minivans for transport. However, Denmark actually regards itself as being relatively poor in terms of available terrain and there is a heavy focus on overseas training camps. For example, they will be holding a 3-week long WOC training camp in the Halden-Strömstad area in late July-early August.

Whether the Danish success at recent WOC’s has directly been the results of this system, or whether it has simply reflected an excellent crop of athletes maturing on the world stage at the same time, is unclear. Nevertheless it does stand of an example of how relatively poor New Zealand is in terms of our facilities and support.

Following being in Denmark, I was able to divert the journey home to visit daughter Lizzie in Halden. Norway and observe another high intensity community of orienteers. Halden SK (yes, Ski Klub!) hosts a significant number of international elite orienteers embedded in, but with apparently little interaction with, the local population of 30,000. With extensive forests on the doorstep, including an impressive club house, and elite training exercises set every day of the week, again it is a different world to our experience in New Zealand. To a certain extent, however, living, eating and breathing and orienteering demands a lot of mental strength and necessitates some outlet outside the sport both in terms of variety and mingling with a different set of people. Again, a high intensity environment which will not suit everybody.

As an additional benefit of visiting Halden, I was able to look over the WOC terrain and check out NZL arrangements 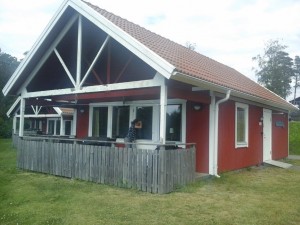 as they stand at present. First and foremost a visit to the official accommodation centre at Daftö, just south of Strömstad convinced me that our arrangements for 2016 will be far better than we have had for the last 3 years. The picture shows the 8 bed unit that NZL has booked along with a smaller 4 bed unit. Both units include full kitchen facilities, TV, tiled bathroom and underfloor heating. 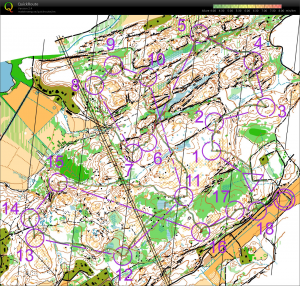 A couple of runs on WOC training maps showed a mixture of rocky slopes with areas of steep uncrossable cliffs to negotiate a way through, flattish hilltops with multiple small areas of bare rock and clearings which are fast to traverse but easy to run off line on. The denser areas ssem to be primarily in valley floors and marshes, and with undergrowth likely to be thicker in late August than in early June things look to be being physically tough in the forest races.
While I was in Halden the Swedes and French had their trial races over the weekend of 10/11/12 June, with the Czech’s following suit a few days later. Meanwhile the Swiss were having about a 10 day training camp in the area, with the British team due to arrive a few days later. The Swedish/French middle distance race as posted by Thierry Gueorgiou is shown above (note the north lines not going straight up the page, something I trust will not be the case at WOC!).

At WOC2015 in Scotland the decision was made that from 2019 WOC will split into a forest WOC in odd years and an urban/sprint WOC in even years, with the exact format of the urban WOC and the qualification criteria for forest WOC to be voted on at WOC2016. The IOF Foot-O Committee have now published their final proposals for these.

Apart from the 3-person men and women’s relays, it is proposed that forest WOC will consist of a middle distance and a long distance. For the middle distance there will be 3 qualification heats with each nation will be allowed 3 competitors. The top 15 in each heat will proceed automatically to the final, but any nation with no qualifiers will be guaranteed one runner. For the long distance there will be a qualification system based on previous results at WOC to decide whether a given nation has 3, 2 or 1 entrant. The first forest WOC, in 2019, has been awarded to Norway and will be held in the Sarpsborg region.

Sprint/urban WOC will have an individual sprint with qualifying heats, as at present, and a sprint relay. There will also be an additional race which is highly likely to be a knockout sprint involving a series of rounds of mass start races. The first sprint/urban WOC (2020) has provisionally been awarded to Denmark, with embargoed areas to the south of Aarhus having just been announced.

We are looking for volunteer coaches and helpers for the U23/Regional Squads Camp being held in Canterbury from Sunday 11th through to Friday 16th December. The camp is for those aged 17-22, and will be based at the Mt Cheeseman Forest Lodge. We require coaches suitably experienced at coaching for an elite level and also a couple of helpers to manage the cooking and help with van driving. Volunteers get a fun week of training in the Canterbury High Country with camp costs and most travel expenses covered. Please contact [email protected] if interested or if you have any more questions.

There will be no specific trials for selection.  Selection will be based on Known Form. Although teams will be selected on all Known Form, the development aspect of Test Matches will also be taken into account.

Nominations should be made to the convenor of selectors Alistair Cory-Wright ([email protected]) by 15 July 2016.

Yes, it’s that time again as we move into the northern hemisphere summer and JWOC and WOC. JWOC, in Switzerland starts with the sprint on Sunday, July 10th in Scuol, “at maximal speed through six centuries of architecture” as is promised by the course planners. This is followed by the long distance at Val Mustair “the air is going to be a 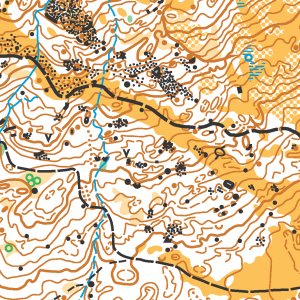 scenery” at Ftan. Both of these races are being set by WOC medallists and run at altitude. As always, JWOC finishes with the relay.

Congratulations to Tim Robertson on his victory in the Antwerp Street Race last weekend, and in the Antwerp Sprint Weekend overall, beating out Yannick Michiels for first place.