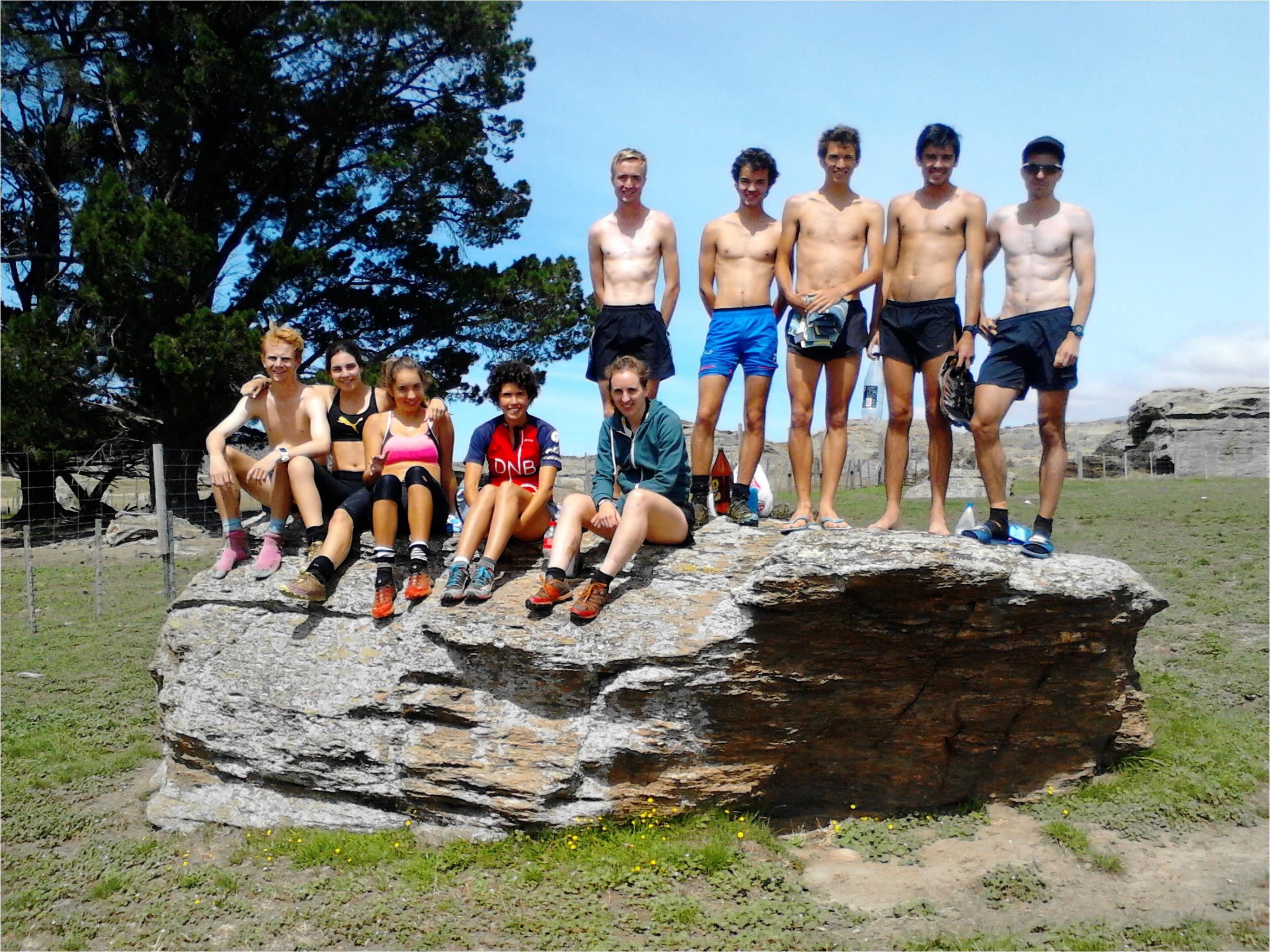 Notwithstanding the need for us all to have a break at some point in the year it is always a relief to see competition get under way again. Once more, courtesy of Southern O Week this has been early enough to give plenty to put in the February HP News, not least as it also doubled as the first round of the SuperSeries and was followed by a successful, if tiring, HP camp.

SOW 2017 was comprised of 3 races. The first, a “short” distance planned by Chris and Emily Forne was a mix of native forest, river flats and a bit of the campground at 12 Mile Delta, west of Queenstown. Hardly a sprint but enjoyable nevertheless with New Zealand’s top two athletes, Matt Ogden and Lizzie Ingham taking the men’s and women’s honours respectively. While Laura Robertson, 2nd in W21E, and Tommy Hayes, 3rd in M21E, might have been expected, more of a surprise was to see PAPO’s Alistair Richardson finishing 2nd in the men and Selena Metherall 3rd behind Laura. 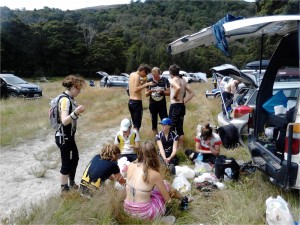 Sunday saw things move to the beech forest of Waikaia for a long distance, and, boy, was it long, testified by the fact that fully half of the women’s elite field DNF’d! The elite men showed a bit more fortitude but again there was close to a 25% DNF rate. This was typical Chris Forne terrain and he did not disappoint with a 5 minute margin over Matt and another 3 back to Gene Beveridge. In W21E Lizzie showed the benefit that living and training in Halden has worked for her and was not only the sole woman under 2 hours, but won by a margin of over 30 minutes from Renee Beveridge, with Greta Knarston in 3rd. In M20 visiting Swiss junior Florian Attinger shaded a rapidly improving Cameron de L’Isle by 41 seconds with Callum Cleary in 3rd place. It was even closer in W20 where Katie Cory-Wright was only 29 seconds ahead of Jenna Tidswell with Brianna Steven another 9 minutes back.

The final day of SOW was also in Waikaia but to the north of the main stream valley. This middle distance started in a beautifully open piece of forest littered with boulders and cliffs – but for the trees not being eucalypt it could have been Australia. After crossing the main track the forest became rougher and the rock and marsh detail harder to interpret. In M21E, Gene rose to the top with a 30s win over Tommy, with the next 4 places all filled by overseas visitors. Among the elite women Lizzie completed her trifecta but this time with less than a minute on Laura and with Renee in 3rd. There was also an excellent 6th place by Tegan Knightsbridge.

In terms of the SuperSeries consistent weekends overall (barring a mispunch by Matt Ogden in the middle) has 4 athletes within 27 points of each other in M21E. In W21E, with the leading two – Lizzie Inghamand Laura Robertson – now returned respectively to Norway and Scotland, Renee Beveridge looks to be in the box-seat after round 1. With the 20’s running the same courses as the elites on 2 of the days things are a little more complex. Tommy Hayes leads M20 despite running elite in the long distance, while none of the girls competed on all 3 days. Leading scores are:

The second round of the SuperSeries is the trials weekend as outlined below. For all 3 races the 21’s and 20’s will run the same courses meaning that M/W20’s can earn both senior and junior points.

The information below was published last month in HP News. Note that although payment ($12 per race) may be made at the first race, all athletes intending to run must enter officially through https://entries.wellingtonorienteering.org.nz/online-entry.

Trials for the World Games, JWOC and the New Zealand Secondary School Team for the ANZ Schools Test Match will take place on Saturday and Sunday 25/26 March. These will also double as Round 2 of the 2017 SuperSeries at both M/W21E and M/W20 level.

Previous use: none – new area

Mixture of pine, eucalypt and native vegetation on steep slopes, with an intricate track network.

The sprint and middle distance areas are 10 minutes drive apart.

Previous use: small parts at QB2013, otherwise a remap of an old area not used for over 15 years.

Others than those running in the trials or SuperSeries will be able to run a course on Saturday afternoon at the Middle trial, but not at the Sprint. The Long distance on Sunday is also a WOA OY and there will be a full range of courses.

The position of Pre-JWOC Coach, aimed principally at overseeing physical preparation, has been filled by John Robertson. Quite apart from being the father of two of our best elites, John comes from a strong running background and is an ideal person to oversee the JWOC team prior to them leaving New Zealand. John will be in touch with all those who have put themselves forward for the trials, and once selected those in the team will be expected to liaise with John over their training programmes in the lead-up to JWOC.

After the rigours of SOW about a dozen members of the HP squads travelled on to Alexandra for the HP camp. This kicked off on the Tuesday with sprint exercises on a selection of maps produced by Alexandra resident Joe Sherriff. The first of these, although still needing a bit of work on the rock and vegetation, was widely regarded as being world-class sprint terrain – a complex mountain bike track network through the middle of complex old gold mining terrain – who could ask for more? After a lunch break we moved to a map based around Molyneaux Park for another sprint exercise, before a third, evening, session, of sprint intervals around Dunstan High School. 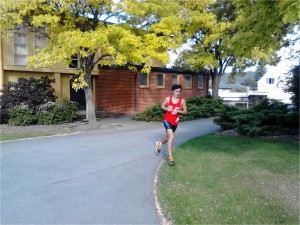 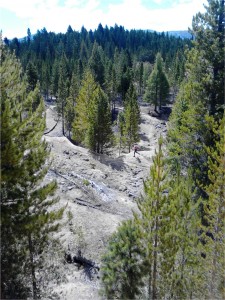 On the Wednesday we made the long trip down to the old classic gold mining map of Naseby for a session with 3 exercises. The first, similar to one run at the recent Wellington camp interspersed running and orienteering intervals. This was followed by a simplification exercise which, unfortunately, ran into an area of map which was much thicker than shown. Over lunch, along with dips in the swimming dam, we saw the first appearance of the HP Tanning Camp, with Matt Ogden and Tommy Hayes as leading proponents. The day finished with a middle distance course set through the complexity of the mining terrain.

Day 3 was spent amid the rocks of Earnsleugh Station and started with a short warm-up aimed as a reminder of the techniques to use on a rock-littered map. It used a contour only version of the map except for a single boulder at the centre of each control circle! With techniques firmly in mind there was a mass start exercise with a series of butterfly loops so that no more than two athletes did all the controls in the same order. With tiredness setting in this was taken at various speeds by different people, although there was an impressive race of the top 4 men coming in very close together in the order of Matt O, Cameron de L’I, Gene B and Florian A. 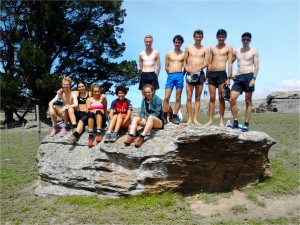 a bit. On the Friday we started in Sticky Forest with some intervals through the complex track network before heading out down the Matukituki River to Fraser Mill’s Matukituki map for a middle distance. The day finished with the HP Leader being presented with a birthday cake with the age ‘30’ on it – I wish. The final training opportunity was 7.30 am on Saturday morning – a sprint around the centre of Wanaka, deliberately timed before the crowds arrived. Unfortunately tired bodies meant that the uptake for this once in a lifetime offering was quite small!

In retrospect it’s fair to say that the camp, following on from SOW, could probably have done with a rest day, but with only 4 days available this was hard to fit in. Despite the tiredness several of the attendees still found the legs to run up to the Alexandra lookout, and more impressively, up Mount Roy in Wanaka.

Attendees were Florian Attinger, Gene Beveridge, Renee Beveridge, Kayla Fairbairn, Lizzie Ingham, Cameron de L’Isle, Tommy Hayes, Matt Ogden, Cameron Tier, Alice Tilley, and, as a guest who contributed heaps both by driving and in other ways, Greg Thurlow. Thanks are due to Dunedin OC, Joe Sherriff and Fraser Mills for the maps, and to all the landowners for permissions.

The IOF Foot-O Commission has published a discussion document on the organisation of the international orienteering calendar from 2020 onwards. The proposal splits the year between the beginning of April and the end of October into 6 competition periods and makes recommendations as to which major events should fit into each period. This takes into account the need to avoid major international events in other codes (e.g. the football World Cup, Olympics etc.) and lists the following considerations to be taken into account:

The distribution of periods is reproduced below. (Click on image to view full size). 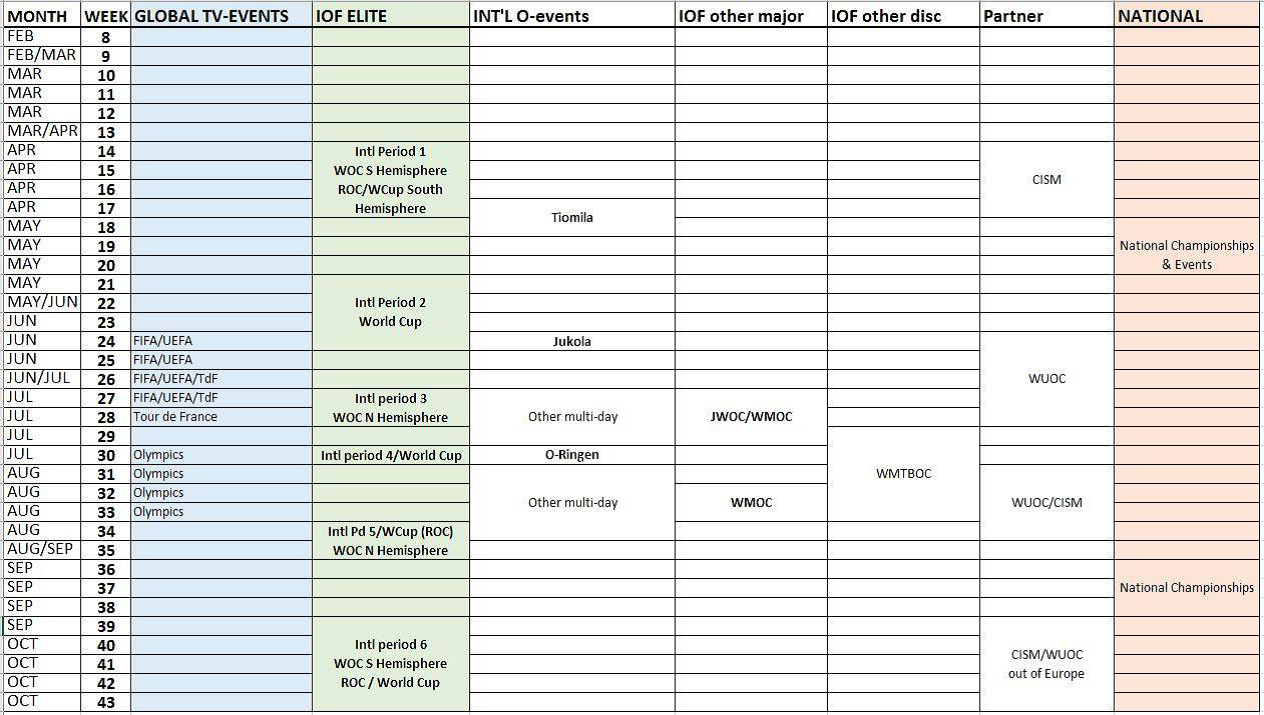 Anyone who wishes to see the full document can contact [email protected] . Athletes who wish to comment should send their views to [email protected] so that they go through the IOF Athlete’s Commission. Others can send comments to Malcolm Ingham and he will collate them into a response.

Hot off the press, congratulations…..

Chris Forne – in the team that finished 2nd in Godzone 2017 this morning.

Brent Edwards and Georgia Whitla – in the 3rd placed team.

Tane Cambridge, Tim Farrant, Nick Hann and Emily Forner who are all currently paddling up Lake Wakatipu and will be in the 5th (Tane) and 6th (Tim, Nick and Emily) placed teams.

Lizzie Ingham for three outstanding runs at Portugese O Week over the last 3 days and in the tonight’s chasing start with a shot a 3rd place overall.