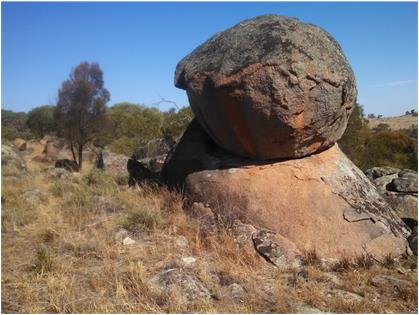 It seems somewhat odd to be writing this in Wellington while a substantial number of NZL orienteers are in Australia at the Oceania Carnival. Nevertheless it has allowed me to keep an eye on both the goings on over the ditch over the weekend, and the happenings in Switzerland where the final round of the World Cup has been underway.

The 9-day Oceania Carnival moving from ACT to Victoria, and featuring the return leg of the Pinestars-Bushrangers Test Match started on Saturday with the Oceania Sprint Championships based on the Charles Sturt University campus at Wagga Wagga. Perhaps slightly unusually the area used by the long courses also took in a boulder-strewn hillside which introduced not only a somewhat non-sprint flavour but also a significant climb. Whether because of this or otherwise, the majority of NZL elites and 20’s were outshone by the locals. The only Kiwi victory went to Lizzie Ingham, who having returned from Norway to this side of the world only 24 hours earlier, made several small errors but still had enough in the tank to hold off Bridget Anderson by 7 seconds. Imogene Scott was the next New Zealander in W21E in 6th place. In M21E Tommy Hayes also had what looked like a winning run until it became clear that he had inadvertently omitted control 13. This left Brodie Nankervis as the winner ahead of Brit William Gardner. Gene Beveridge was the top Kiwi in 6th place just shy of a minute off the pace. 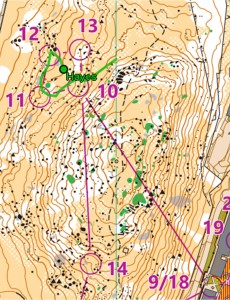 In W20 both Jess Sewell and Kaia Joergensen made the top 6 but not the placings in a race won in a very impressive 17:44, 9 seconds faster than Lizzie on the same course) by Ella Cuthbert. In the junior men Will Tidswell was the top Pinestar in 8th place in a race dominated by the Australians.

There was hope that the New Zealanders would be more at home in the Australian Long Distance the following day, run on open rocky slopes with good visibility. In fact the W20’s came into their own with an impressive series of results which saw 6 Kiwis in the top 10, led by Tessa Burns having probably her best result to date in a 9 second winning margin over Zoe Melhuish. Tessa was accompanied by Katie Cory-Wright (4th), Briana Steven (6th), Kaia Joergensen (7th), Marina Comeskey (9th) and Jess Sewell (10th). In M20 the Australians again dominated with only Oliver Egan breaking into the top 6.

In the elite grades Gene was again the top New Zealander in M21E finishing in 6th place in a race won by Simon Uppill. In W21E Lizzie took her second win in two days with a commanding margin of nearly 5 minutes over Natasha Key, with Imogene taking 4th spot behind Krystal Neumann. 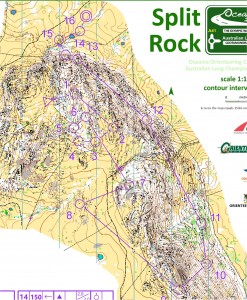 Monday’s Oceania Relay saw Australia win 3 out of the 4 Test Match classes with New Zealand’s only win coming in W21E. With state teams also running there was always going to be stiff competition outside the actual national teams and in M21E New Zealand’s team of Gene, Cameron de L’Isle and Tommy were pushed into 3rd behind AUS and ACT well back from the winning time. In the elite women a tight first leg between Imogene and Natasha Key was followed by Krystal Neumann opening up a gap of nearly 2 minutes on Lara Molloy, before Lizzie caught and pulled away from the Australians on the final leg. In M20, although never completely out of touch, NZL never looked like taking the honours in a rae won by ACT ahead of the Bushrangers team and New South Wales, the Kiwis finishing 4th. Things were much closer in W20 where Katie Cory-Wright finished the first leg only 12 seconds down on Australia, although also behind Queensland. Marina Comeskey the cut the gap to 7 seconds as Queensland fell away, setting up a last leg duel between Briana Steven for NZL and Tara Melhuish for AUS. Amid the splits in the complex rocks Briana was unable to overtake Tara and AUS took the class by 17 seconds.

With the relay counting in the Test Match as well as the previous two days, the current scores are:

With the scores to be normalized at the end of the week to 100 for winning a class, the Pinestars need strong performances at next weekends Oceania Long and Middle to preserve the lead from the home test at Queen’s Birthday!

The third round of the World Cup, in Laufen, Switzerland, kicked off the day before Oceania with a middle distance. New Zealand was represented by only Tim and Laura Robertson. Unfortunately the weekend did not prove to be a roaring success. In the middle distance both finished in 93rd  place in big fields (115 men, 98 women). At the front of the fields the two young stars were to the fore. Once again Simona Aebersold, in her first year as a senior, took a place on the podium although two and half minutes behind world champion Tove Alexandersson. Perhaps not surprisingly there were 2 other Swiss in the top 6. In the men, 2016 world junior champion Joey Hadorn won a very tight race from fellow Swiss Daniel Hubmann.

With WOC2020 a sprint WOC the real focus of World Cup Round 3 was perhaps, not least for Tim and Laura, on the second and third days. Saturday so the second ever appearance of the new knock-out sprint format at a World Cup. With 3 heats for both men and women, and only the top 12 in each heat to qualify for the knock-out stages, there is no margin for mistakes. Unfortunately, neither Tim nor Laura made the cut. A near 45 second mistake on control 6 was effectively the end of Tim’s race, while Laura, despite being as high as 6th near mid-race shed places over the final part of the course to finish 17th, 14 seconds from qualifying. 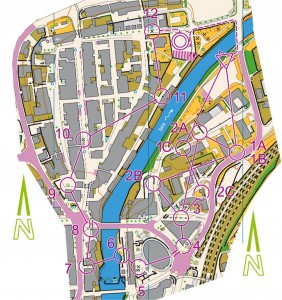 World Cup KO Sprint Women’s Semi-Final showing the three options from S-3 which you have about 20s of looking at maps to choose which you want.

Through the quarter-finals and semi-finals other top runners fell by the wayside with three of the home favourites, Daniel Hubmann, Martin Hubmann and Matthias Kyburz all going out in the semis. Ultimately, Tove Alexandersson again took the win in the women’s final with a commanding (for such a short race) margin of 9s over Tereza Janosikova of Czech Republic. It was a good day for the Czechs with Vojtech Kral taking the men’s final from Joey Hadorn.

Interestingly both the semi-finals and final used the map choice format of forking. In this each athlete, prior to the start, has 20-30 seconds to look at three possible variations of a leg/legs and choose which they wish to have. No-one knows what anyone else has chosen. For the women’s semi-final the legs in question (shown in the image) were from the start to control 3. What would you have chosen?

Quite apart from the KO rounds being mass start, this introduces yet another dimension to both the challenge and to the course planning.

The World Cup round finished with a standard individual sprint, although the A race was restricted to the top athletes in the standings, others running in the B race which did not have World Cup points on offer. The win in the men’s race went to Belgium’s Yannick Michels by 2 seconds from Britain’s Kristian Jones with Swiss filling 3 of the next 4 places. For reasons as yet unknown Tim finished an uncharacteristic 34th. Laura did not make the cut for the A race and finished 28th in The B. Perhaps needless to say, Tove again left the field for dead with a margin of 16 seconds ahead of Elena Roos and another 30 odd seconds back to Simona Aebersold in 3rd.

The final round of the World Cup for 2019 will be held in Nanhai, China and will consist of a middle distance (Saturday 26 October), a sprint relay on Sunday 27th, and an individual sprint on Tuesday 29th. NZL will be represented by Tim, Tommy Hayes and Devon Beckman in the men and Laura, Lizzie Ingham and Alice Tilley in the women, managed by John and Anna Robertson.

Over the last few weeks the programme for trials for the various New Zealand teams in 2020 has been formulated. These include selection for teams for the Junior World Champs, the World University Champs, and WOC.

Both JWOC and WUOC will have 2 sets of trials which will cover all distances. These will be:

As WOC in 2020 is a sprint WOC there will be an extended series of trials which will include a focus on KO sprint. These will be:

It is envisaged that there will be a HP sprint training camp in the week between the ONZ Champs and the weekend of 18/19 April. Calls for availability will go out in due course – somewhat earlier than usual for WOC, and as per usual previous international performance and known form will also be considered.

Preparations for this are in full swing. For the first time applications have exceeded the number of places available and some hard decisions have had to be made. It is worth remembering that the U23 Camp is a High Performance camp and, as such, is not a simple follow-on from Junior Camp, but requires a relatively high degree of previous achievement. Successful applicants will be notified through ONZ and more detailed further information will be sent out towards the end of October.