After the plethora of events in October, November has seen a dearth! Hence, no pictures, no results, but the chance to reflect on a couple of the issues that came to light before and during October – not least the allegations of cheating that arose out of the world Military Games and World Cup races in China. Also details, thus far, of the 2020 National League races and proposed HP camps for 2020.

China, ethics and all that

As most people will have caught up with by now, the really big issue that came out of the final round of the World Cup in China, which followed on from the World Military Games (WMG), regarded the issue of cheating. For those who weren’t aware this arose in the WMG when Chinese athletes filled most of the top places in the middle distance race and were all subsequently disqualified after it was proven that they had received help from markings in the terrain and from strategically located spectators. Although the WMG is a partner event for IOF it does not come directly under IOF jurisdiction. However, the subsequent victory in the World Cup sprint, and other high placings, by Chinese athletes similarly drew suspicion.

The IOF produced a lengthy statement on its web site, with the IOF president referring the issue to the Ethics panel:

“The International Orienteering Federation, together with the Orienteering Association of China, organised the IOF World Cup 2019 Final round in Foshan, China from 25-30.10.2019. The Event was executed on the highest organisational level and we are very thankful to People’s Government of Guangdong Province, Guangdong Provincial Sports Administration, The People’s Government of Foshan City, all sponsors and supporters.

However, members in our community and orienteering friends globally were surprised by race developments and final results. Incredible improvement of technical skills and running speed of some athletes creates questions and we, the IOF, need to analyse the background for such unexpected performances from a few athletes.  Our sport is based on three values – Inclusive, Sustainable and Ethical. There are understandable doubts that maybe some of our basic values were ignored by some athletes.

Based on the information collected from various sources I hereby use my right in accordance with the IOF Code of Ethics, to report the matter to the IOF Ethics Panel and ask them to investigate possible violations of the IOF Code of Ethics at the IOF World Cup Sprint Final Event on 29.10.2019.”

Interestingly most of the most vocal suspicion came from Europe and drew a very apposite response from Australia’s Brodie Nankervis on Facebook.

“To be honest when I first saw the Chinese results on race day I thought that foul play was likely. As has been raised by many people, there are many ways to cheat in orienteering that are difficult to control and the very recent history of cheating at the Military Games by the Chinese team wasn’t helping. Add to this my frustrating performance and it was easy to suspect cheating.

Now I have had more time to analyse the situation its clear to me that it is unfair and unsportsmanslike to accuse the Chinese of cheating without evidence to back up this claim. I’m not saying that cheating didn’t happen, its plausible that it occurred, but until there is hard evidence of this we need to control ourselves.

To be honest I am disgusted by some of the unsavoury comments being made by the worlds best, role models who I respect as great sportspeople. I understand people are surprised by the Chinese results – but some responses ooze arrogance and to me appear to be a “sore loser” response.

I will leave you with this: let’s assume that no foul play was involved, with the Chinese team dedicating countless hours preparing for this specific event. Imagine having the race of your life in your home terrain with a fantastic result – only to be called a liar and a cheat by majority of the international orienteering community. I could have come 10th if you take out all of my mistakes and I (1) did not prepare at all in the Chinese terrain, (2) run over 16:00 for 5km and (3) have little to none agility.”

Subsequent comments in response to Brodie’s post also made some interesting reading. In particular, pointing out the difference in attitude applied to athletes, like the Chinese, who quite likely spent a lot of time preparing legitimately for a race on home soil and subsequently made full use of their local knowledge, and the approach, used by many top nations, of holding lengthy training camps on terrain immediately adjacent to competition terrain. Ultimately there will always be a home advantage simply through local knowledge of the type of terrain, but It does beg  the question of how, should New Zealand have acquired JWOC2022, top performances by Kiwis would have been judged.

After a careful consideration of the 2020 calendar (as it exists at present) the National O-League for 2020 will consist of the following rounds.

Unfortunately there are no listed events in the South island in the first half of the year that look suitable for inclusion. Hopefully that will rectified in a big way in 2021 when Oceania is held there. There is also somewhat more of an emphasis on sprint events than in previous years, largely because of 2020 seeing the first sprint WOC. The exact breakdown of how many events will count will be given when there is a clearer idea of the make-up of QB is known.

At this stage 4 camps are in the stages of being planned.

February 21-23: Nelson – a mix of sprint training in Nelson and forest training at Nelson Lakes.

Those interested in attending the two camps in January should let Malcolm Ingham (mandg.ingham@xtra.co.nz) know asap. The Wellington camp will be based at Mawley Park Holiday park in Masterton. For the post Lonely Mountain sprint days, unfortunately group accommodation at TOPEC is unavailable and attendees will need to make their own arrangements.

Matt Ogden is taking a lead in organising the Nelson camp. The proposed format is:

There is a link (https://forms.gle/mJ78cP1NWhhocPiL8) to express interest, with more details to come later.

Further information on the Palmerston North camp will be provided in due course.

Some time ago there was a discussion regarding the worth of New Zealand hosting World Ranking Events (WREs). This was largely brought about in response to an apparent unwillingness by many clubs to host these due to the requirements of, for example, needing quarantine, an IOF controller, and the posting of start lists and results on Eventor. Additionally, ONZ pays a fee for the privilege of hosting a WRE, and it was queried if the World Ranking points gained from these events were of much use to our athletes at WOC and World Cups.

The restructuring of the World Ranking system, so that for each of sprint and forest rankings 4 events over 2 years count, and the change in the way in which points are calculated, has added a new dimension to this discussion. This came into focus at WOC this year when some New Zealand athletes discovered sudden drops in their rankings which led to early start times in the long distance. Subsequent calculations using the new system showed that the points that could have been gained at the ONZ Championships, had it been a WRE, would under the new system have been sufficient to make quite a difference. It is also worth noting that a new rule (actually overlooked by the Norwegian organisers at WOC2019, leading to protest and counter-protest) is that to qualify to run in the WOC long distance an athlete has to have a minimum number of World Ranking points over a specified time span.

As a result New Zealand will now aim to host 2 or 3 WRE events a year, simply to ensure that or top home-based athletes have a base of points that they can draw on. In 2020 there will be three WREs – the sprint distance and middle distance at the ONZ Championships, and one of events at Queen’s Birthday 2020. Coupled with events at Oceania 2021, where the individual events are automatically WREs, this will avoid any plummeting in rankings prior to the next forest WOC in Czech Republic.

With no pressure of orienteering events to organize, and exercises for the Under 23 camp planned, I did have time in mid-November to be part of organizing a local Wellington 3-hour evening rogaine. So, for those who miss having a map to look at elsewhere in this HP News, look below and see what route you would have planned. The first digit of the control number indicates the number of points e.g. 27 is 20 points, 43 is 40 points, 101 is 100 points etc. 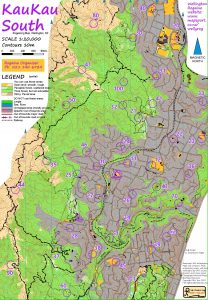