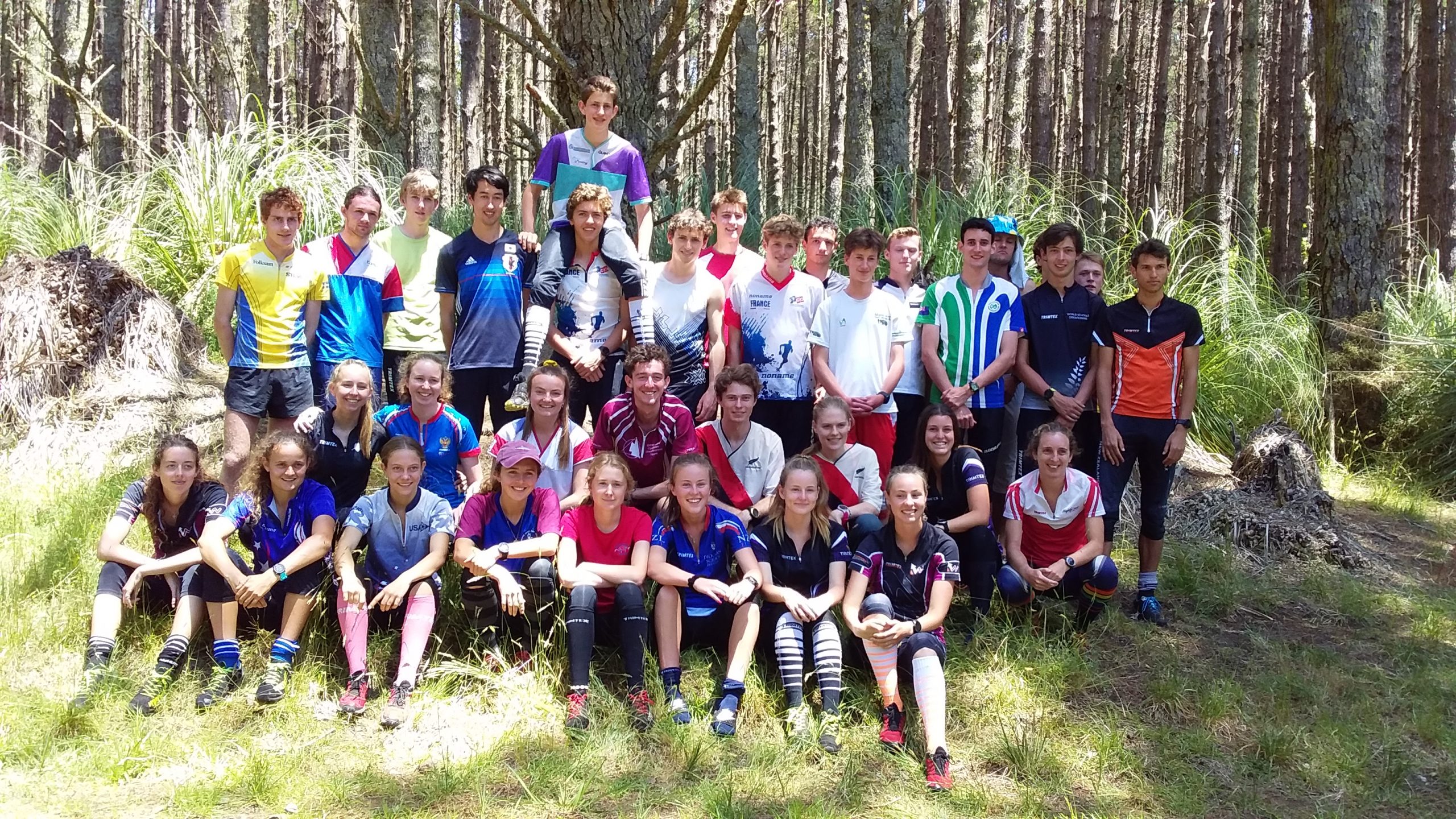 With essentially no events of note the main feature of December is the Under 23 Development Camp, held this year courtesy of Counties Manakau Orienteering Club. However, after a long year it also provides a chance to take a short break before launching into the next year. Of course, 2020 will see an early start to the orienteering year with sprints in January, including an early WOC trial, setting things off. So, enjoy the respite will you can. Thanks, as always, to those who have helped with HP during the year – in helping at camps, running trials, clubs for making maps available for training, and to the athletes for making things generally so enjoyable.

After 2 years in the lower North Island, the Under 23 Camp for 2019 moved north and was based firmly in Counties Manakau territory. Accommodation was at Clarks Beach Holiday Park amidst the expensive holiday homes. Of the 33 attendees nearly half were at the first such camp and faced with a significant step-up from Junior Camp. Nonetheless, on the application forms no less than 17 stated JWOC as their main goal for 2020, with a further 10 stating the World University Championships.

This year we were also lucky to have Lizzie Ingham in attendance as a coach, bringing the experience not only of 4 JWOCs and 9 WOCs, but also 8 years living and training overseas. The camp was also joined for part of the time by Laura Ramstein of Austria (also with 7-8 WOCs to her name) and Phillip von Arx of Switzerland who is one of the Swiss Regional coaches. This level of experience in those leading the camp is invaluable.

Proceedings kicked off on Saturday evening with the usual introduction to the camp. This emphasises the size of the jump from being a successful junior in New Zealand and Australia to competing on the international stage at events like JWOC. One aspect of this is the need not only for improved physical fitness, but also the concomitant increase in navigational speed that is required to prevent the legs from outrunning the brain. This can partly be addressed by much more focus on training such as mass start exercises, both with and without control splits, something which can also only be beneficial to relay performance. Indeed, the first four days of the camp all included such exercises.

The southern part of Waiuku forest was the venue for day 1 of training. This started with a route choice exercise consisting of 5 long legs, with athletes set off in pairs. It also provided the first opportunity to use the 10 GPS trackers that Lizzie had brought from Norway as a training aid. In the subsequent evening session, the usefulness of these was clearly demonstrated as we used the 2Drerun facility on loggator.com to review route choices from the exercise. 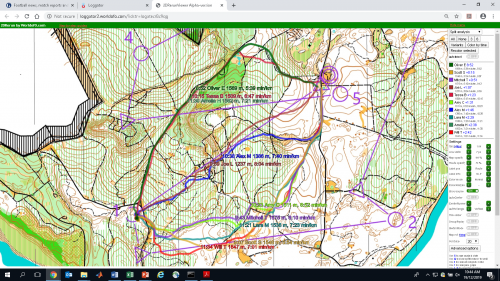 The afternoon exercise consisted of mass start relay intervals, with split controls, with the men and women started separately. There was some confusion here given the large expanses of cutty grass in areas of the forest, some of which was marked as green stripes while other parts, with equal density of the stuff, was mapped as white.

On Monday morning the grass track at Pukekohe Stadium was the venue for a 3000mtime-trial. At previous camps such trials have been on modern artificial surfaces which provide both better traction and increased energy efficiency. It is therefore to his credit that Joe Lynch ran the fastest time (9m 10s) that we have yet had at a camp, certainly equivalent to sub-9 minutes on a synthetic track. Ronan Lee also showed his potential with 9m 24s. Among the women Tessa Burns and Amelia Horne, paced by Lizzie, both snuck under 12 minutes.

The afternoon was dedicated to sprint training at Wesley College. Two exercises involving corridors and windows were followed by an informal sprint relay. With men outnumbering women picking relatively even teams was well-nigh impossible and even with the vagaries of an ad-hoc handicap system a well stacked team of Marisol, Joe, Liam T and visitor Phillip came out on top. The Monday evening discussion continued the sprint theme, with comparison of the frequent differences in sprint terrain between Europe and Australasia – from street and alley networks to building by building navigation on campuses. 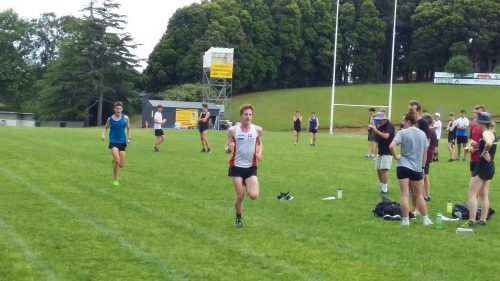 The following day saw a long, dusty drive on to the Rock Garden. Here, the day started with the interesting exercise of getting athletes, in pairs, to put controls out using a map which had all the rock removed from it. Not easy when many of the controls were actually on rock features, thus requiring careful reading of the contours as well as distance and height estimation. Only one control ultimately proved a little dodgy in its location! Following this there was a short (~2k) course, untimed, to refamiliarize with the full map. 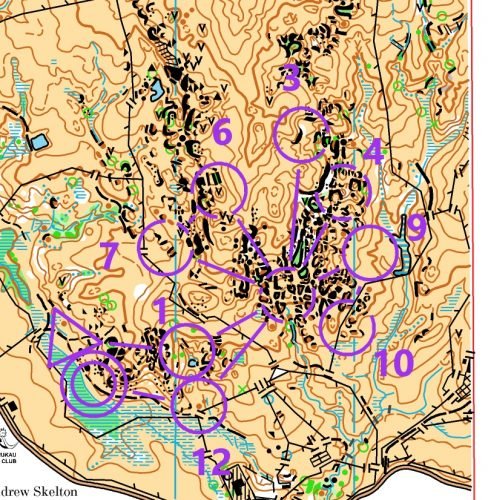 All this was the prologue to two mass start exercises in which athletes were set off in groups of 6 on short, timed, courses. These had butterfly loops to avoid following and gave real race training in a complex navigational environment. The GPS routes, and observations, helped reinforce some of the observations made after the route choice exercise on Sunday – differences in favoured choice between men and women being one feature, with the latter group often choosing to run extra distance to avoid climb.

At the end of this hot day, after a short discussion of the day’s exercises, Laura and Phillip gave some insight into their experiences of training/coaching systems in Austria and Switzerland, respectively.

Wednesday saw a visit to the sand-dunes of Kelland Road for a series of intervals, done without compass, which mixed long legs across the large dune structures with intricate shorter legs amid the detail. Aimed at showing the need to have accurate route navigation across the less detailed areas and control of pace in the complex dunes. The afternoon session had another mass start race with splits.

With enough newcomers in the group Malcolm gave a short evening presentation on drugs and drug testing – a reprise of the more formal presentation given by a representative of DFSNZ two years ago – while Jean C-W talked about the psychological approach to competition and racing. 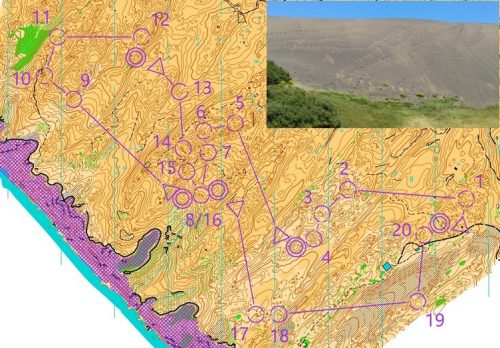 Intervals on Kelland Road with footsteps in the sand coming down from 19 to 20.

The final full day of the camp sees the camp champs in the afternoon. This was in the northern block of Waiuku forest and was preceded by a short verbalization exercise in pairs, the only exercise of the week where the map let us down, being much greener than shown. Fortunately, the same was not true of the part of the area used for the camp champs, starting in areas of cutty grass and lower visibility before going into the lovely running dunes by the coast and returning into blocks with grass underfoot. Ed, having done little earlier in the week after running the Luxmore Grunt on the previous Saturday, blitzed the men’s field with what he claimed was his best run of the year. Scott was 5 minutes back with Joe in 3rd. The women’s race was much closer with Georgia, Katie and Jenna covered by 90 seconds, Georgia taking the honours. Thursday saw the final evening session with a general review of the week and a look ahead to 2020, but preceded by an excellent presentation by Lizzie on living and training abroad. 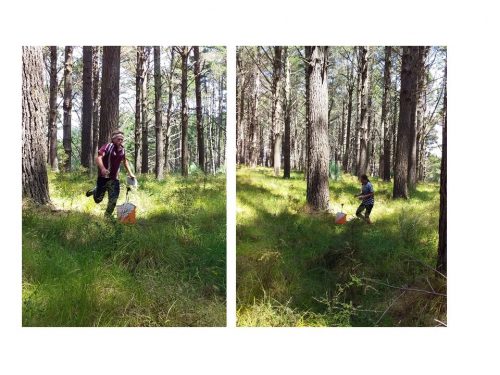 The final act, on Friday morning was the camp sprint champs held on Pukekohe High School. This was taken out by Tessa in the women, by a clear minute from Jenna, with Heidi 3rd, while Joe returned to the front with 30s win over Ed, Oliver taking third place.

A big thank you is due to Counties Manakau OC for all their help, especially Val and John Robinson and Ross Brighouse. Also to Lizzie, Jean, Gene, Laura and Phillip for   help. Next year, hopefully, the Under 23 camp will return to the South Island.

Orienteers in the Mountains

The first weekend in December sees two of the most prominent mountain races in the country – the Goat on the slopes of Ruapehu, and the Kepler Challenge/Luxmore Grunt in Te Anau. The weather during the preceding week resulted in the courses for both the Goat and Kepler being changed, the former starting and finishing at the bottom of the Ohakune Mountain Road and the using the various tracks for ascent and descent. The rejigged Kepler went up and down Mount Luxmore before an extended excursion into the flats to the south. 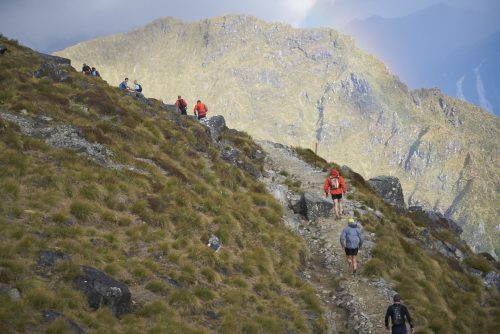 Orienteers were prominent on both islands. Tommy Hayes, Callum Hill and Jason Bond were 2nd, 3rd and 5th respectively in the Under 23 category at the Goat, Tommy running 1:50:13 and Callum also being under 2 hours. Kayla Fairburn was 5th Under 23 women in 2:44:29, with Anna Cory-Wright also running. At the Kepler, Gene Beveridge was 3rd in 4:48:49, while Imogene Scott was just over an hour behind (5:49:48) and 5th women. Ed, Al and Jean Cory-Wright all ran the Luxmore Grunt with Ed finishing 5th in 2:18:47, well ahead of his parents.

The first trial for WOC2020 will be the Knock-out Sprint at Lonely Mountain Sprints on Saturday 25 January. Entries for this close on 7 January. Top entries so far include Frederic Tranchard (FRA) with a sprint World ranking of 23rd and 2019 JWOC sprint gold medallist  Aston Key. New Zealand’s top two female sprinters, Laura Robertson and Lizzie Ingham will also both be competing together on home soil for the first time in 4 years.

Anyone interested in attending the HP camp in Masterton on 18-21 Janaury and/or the 2-day sprint camp in New Plymouth on 28/29 January should let Malcolm Ingham ([email protected]) know asap. The Wellington camp will be based at Mawley Park Holiday Park in Masterton. Accommodation has been booked but is limited.

Matt Ogden is taking a lead in organising a Nelson camp on February 22/23.. The proposed format is:

There is a link (https://forms.gle/mJ78cP1NWhhocPiL8) to express interest, with more details to come later.