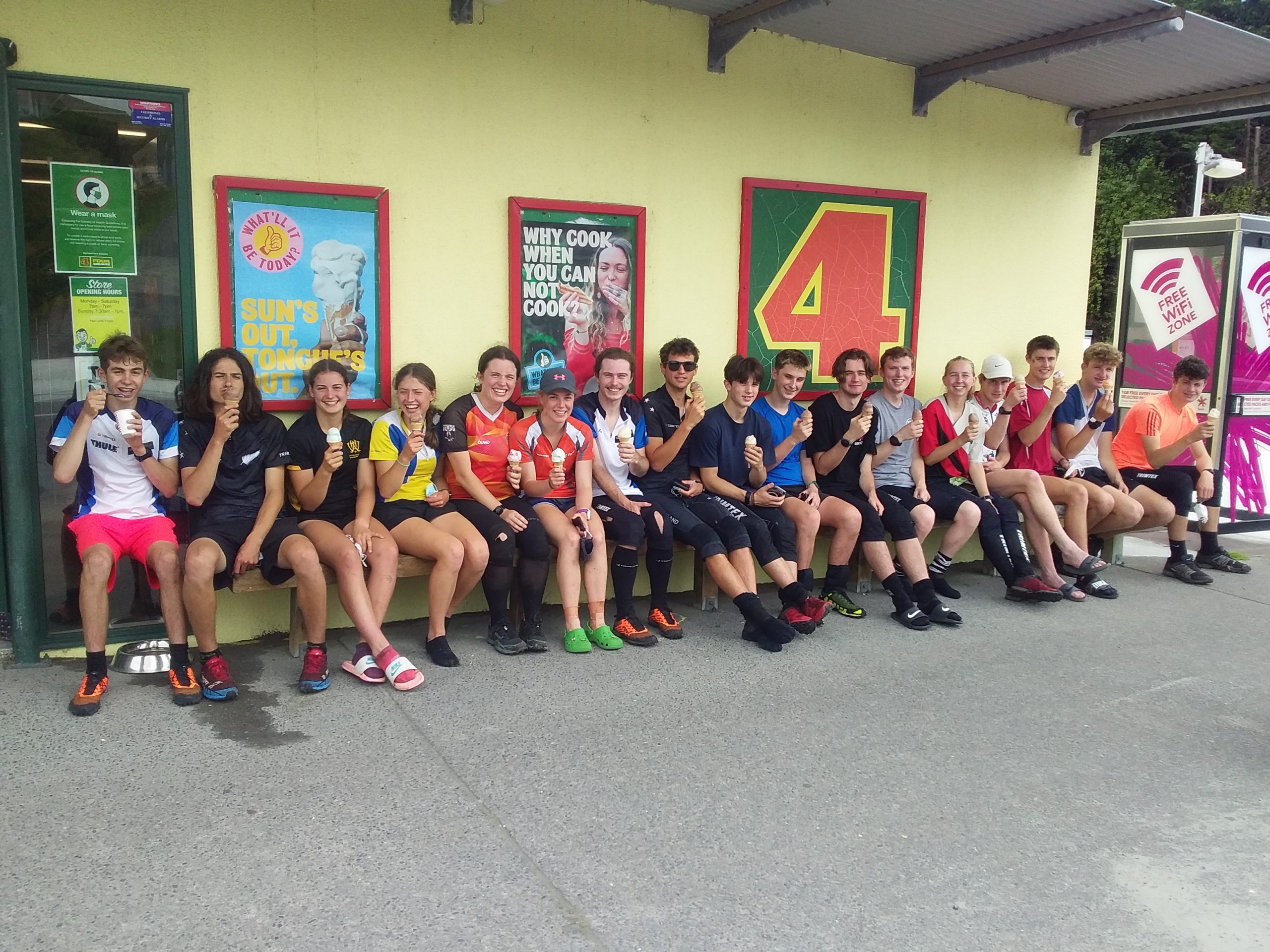 After a very intermittent year for orienteering 2021 ended with several positive notes. Not least of these was the first ever award by High Performance Sport New Zealand to orienteering in the form of a small amount of funding towards the Scotland 2024 sprint campaign. December also saw recognition from IOF for Tim Robertson and Lizzie Ingham as the top ranked athletes in Oceania at the end of the year, and, notwithstanding the absence of Auckland athletes, a successful Under 23 Camp in Palmerston North. Hopefully, we can now look forward to a 2022, beginning with the not-Oceania Champs, in which we can make a return to full international competition. In the meantime, Merry Christmas to all.

As many of you may by now be aware HPSNZ has awarded ONZ $6000 per year for 3 years towards a targeted sprint campaign aimed at WOC2024. Although this is only a fraction of what was applied for, orienteering is now finally on the HPSNZ radar. In Zoom discussions with HPSNZ we were repeatedly told that the quality of our application was very good. That being the case it may be that, when push came to shove in the final allocation, the lack of public visibility or appreciation of orienteering as a sport counted against us. This is something that ONZ will look to address starting with the new marketing position which will begin early in the new year. The immediate question is how the modest funds awarded are to be used for one of the specific purposes they were applied for. These were:

(1) Support for the National Sprint League (NSL) in enabling/supporting athletes to compete.

Clearly $6k per year is not going to be of much use in (2) above. However, it could go a long way in regard to (1). The suggestion of the GM and HP Leader is therefore that the money is made available, proportionally, to the three manager/coach combinations of the Northern, Central and Southern regional teams to aid them in helping athlete attendance at NSL rounds. This would probably be best done in the form of subsidising group accommodation and travel at (but not to) NSL rounds. It is anticipated that this would be applicable to Rounds 1 (Auckland), 2 (Manawatu) and 4 (Taranaki) but not round 3 (ONZ Champs) as there is a reasonable expectation that all relevant athletes will attend this anyway. Further information on this will be provided in the New Year.

One of the principal aims of the NSL is to develop continued success at international level in sprint orienteering. This in itself requires a focus on bringing those still at junior level, and this includes not only 18’s and 20’s but also 16’s) through to be competitive at senior level.  it is important therefore that as many athletes as possible in these age categories take the opportunity afforded by the NSL to mix it with the seniors. Not just the competition, but hopefully the additional training opportunities that are anticipated, will encourage this.

The following people have kindly agreed to manage/coach the NSL regional teams. So express your interest now.

IOF Awards for Tim and Lizzie

IOF have recently instituted annual awards for the top ranked athletes in each of the IOF regions (i.e. Europe, Asia etc.) as at 1 December. For Oceania these have gone to Tim Robertson and Lizzie Ingham. At this date Tim was ranked 98 in the middle/long rankings and 7 in sprint, while Lizzie was 93 and 86 in middle/long and sprint respectively. Of the awardees Tim and Lizzie were 2 of only 4 athletes who topped both the middle/long and sprint rankings in their region. The other two were Tove Alexandersson – no surprises among the European women – and Anton Salmenkyla of the North American men.

The first round of the 2022 NOL commences in January with the 3 not-Oceania Championships individual races. The sprint and long distance of these have now had their WRE status confirmed, although the middle distance will not be a World Ranking Event. This means that the NOL will now include up to six WRE, giving the opportunity for NZL athletes to significantly improve their ranking scores before the start of the international season.

The new NSL will kick-off with the Super City Sprints at Waitangi Weekend (https://www.orienteering.org.nz/events/auckland-waitangi-sprint-weekend/). Entries for this will open in early 2022.

The first full day of the camp involved a visit to Whirokino. Unfortunately, the change of dates for the camp and on-going mid-week logging in the northern block of Waitarere Forest meant that exercises were restricted to the high dunes on the farmland, with things made even tougher by the exceptionally long grass. The principal exercise here was a series of route choice intervals with the contour detail and the series of steep hillsides intermingled with flatter paddocks providing multiple options even on quite short legs. This, along with the subsequent short mass start relay intervals and the warm temperature, provided quite a physical start to the camp.

Day 2 involved a series of exercises at Scotts Ferry. These started on the northern part of the map with a window and corridor course through the complex dunes. This was designed to test not only distance and direction estimation but, also crucially, the ability to recognize features in the terrain. This proved quite difficult for the early windows which passed through a an area of the map with more muted topography and in which multiple mountain bike tracks provided additional distractions. From the end point of this first exercise participants were split into pairs for a relocation exercise in which each partner had only half of the controls on his/her map.

Following a lunch break the afternoon session moved to the southern part of the area and involved a mass start course arranged so that no two people actually ran the whole course in the same order.

The weekend was given over to sprint training and started on the Massey University campus with a sprint route choice exercise of six long legs criss-crossing the western part of the campus, although one of these was rather disrupted by unmapped building work. This was followed by sprint relay training in the form of a 2-person relay using very finely balanced teams. After Joseph and Ronan had not unexpectedly come in at the head of the first leg, the precision team selection was proven by Nicholas Green bring the OHV team of himself and Oliver Edwards home 2 seconds ahead of Ronan and Briana Steven. Riley Croxford, taking over from Lizzie Ingham, came home 3rd. The morning session finished with a series of mass start map choice exercises as used in KO sprint rounds. These were all about 500-1000 m in length and run with 4 or 5 at a time being given the regulation 20 seconds to choose which option of three they wanted to run. Evening analysis was aided by Gene using this as an interval session and running all the options to compare times.

Saturday afternoon moved to Palmerston North Boys High where proceedings started with a “maze” exercise – lots of small map snippets showing one control at a time and randomly oriented to promote rapid reorientation of the map and feature recognition. This was followed by a mass start course using multiple splittings.

Whereas Saturday’s sprint training, like the previous two days, was in hot and humid weather, Sunday saw the heavens open for a day of sprinting in first Levin and then Foxton. The morning wad devoted to a series of short mass starts of 5 or 6 people at a time using butterfly loops as splitting. Start groups were such that no-one ran against the same person twice. There should have been four such short exercises but the unexpected presence of a gymkhana on the Horowhenua Showgrounds reduced this to three. The minivans then headed north to Foxton for a course that H&S means we seldom get – a sprint on a town map – again in the rain. Unlike the more common sprints that we see in New Zealand, as on the previous day, on school or university campuses, a town-based sprint tends to present route choice problems that are street based rather than building based. This is the common form of sprint orienteering found at WOC and JWOC and something that NZL athletes tend to need more practice at.

Monday, the final full day of the camp saw action move back to Waitarere with a series of morning exercises on Hydrabad. The first of these was a gentle warm-up down the macrocarpa strip to get to the starting point of the main exercises. As those who have run the Pokapu Champs on Hydrabad in either 2020 or 2021 will testify, the southern part of the area now has numerous rough open strips created by logging activity. These mean that there are multiple navigation features almost to the extent of being confusing. In contrast runners we split into pairs and give a course to run on a contour only version of the map, thus having to ignore the vast amount of detail and concentrate only on the land shapes, remembering of course that Hydrabad is one of the few sand-dune maps with 5 m contours rather than 2.5. The tracking from this exercise showed arrange of approaches to choosing routes on only the subtle and not so subtle contour detail. Following the pairs exercise there was a similar individual contour only exercise to round off both the morning and the week of training exercises.

The afternoon was devoted to the Camp Champs at Foxton Beach. This took in both some of the high rough open dunes on the coast and never before used forest to the east where contour detail varies from complex to non-existent and there are multiple MTB tracks. Unfortunately, the rain the day before, and in the previous week, meant that parts of the area were covered in standing water, although the return of hot, humid weather meant that this was perhaps not unwelcome. Joseph, despite an error in a very flat area of forest where he drifted north of the target clearing, ran a fast 21:52. However, he was nearly 90 seconds behind pumped-up coach Gene in 20:38. Zefa Fa’avae continued his promising run of results with 3rd place in 23:04. Kaia Joergensen was fastest of the women in 32:10, 2 minutes ahead of Briana Steven.

After the organizational hiccups and uncertainty overall it was an almighty relief to have a successful camp. Thanks must go to Christo peters for doing much of this organization, Gene Beveridge and Lizzie Ingham for their ever-excellent coaching, and Russell Higham and Gillian Ingham who also contributed by printing maps and helping with the weekend sprint exercises. For the record those in attendance were:

These have now been posted on the ONZ website with listed selection criteria. Those interested in being considered should notify their interest and cell phone number to the Convenor of Selectors Al Cory-Wright ([email protected]) by 28 February 2022.

For JWOC there will be 2 sets of trials

For New Zealand based athletes for WOC selection will be based on:

Note, that there is no expectation that athletes will attend all NSL rounds.