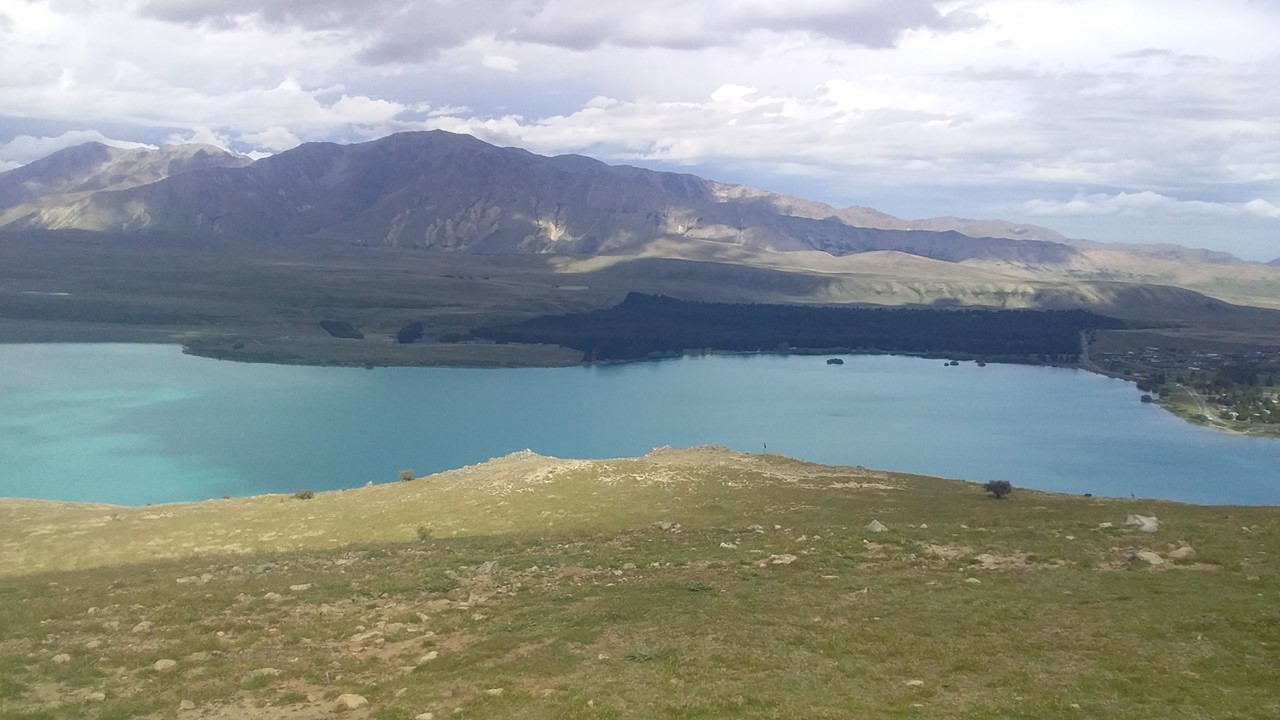 The highlight of November has been the rescheduled JWOC forest races in Portugal. Although only 2 of the original New Zealand team made the return trip to Europe their dedication was rewarded through producing the best Kiwi results for a number of years. Later in the month the final regional championships of the year saw some interesting racing in both sprint and forest. The final act of 2022 – the Under 23 camp – awaits.

Back in July, the forest races at JWOC2022 were cancelled due to the extreme fire risk in Portugese forests. The cooler weather in November saw proceedings reconvene, albeit with a slightly reduced field, and the absence of a qualification race in the middle distance. Kaia Joergensen and Zefa Fa’avae, again managed by Jenni Adams, made the long trip back and produced excellent results.

JWOC part 2 started with the single middle distance race. The majority of both the men’s and women’s courses were amid the relatively steep and rocky areas before a tight finish in the low visibility forest. This was the area where Noel Braun of Sweden, who later on in the weekend was to win the long distance, came to grief. Having led the men’s race from control 1 he dropped his SI card and, as the tracking showed, was essentially stationary for nearly two minutes as he looked for, and found, it. However, the time dropped pushed him from the gold medal to 16th. Only 5 seconds and one place behind Bruan, producing New Zealand’s best men’s middle distance result since 2016, was Zefa, just over 2 and a quarter minutes behind the surprise winner Zoltan Bujdoso of Hungary. The women’s race was almost a procession as Hanna Lundberg, increasingly looking like the natural successor to Tove Alexandersson, won by nearly 3 full minutes. Kaia found things a little tougher than Zefa finishing 53rd, but in the top half of the field.

With no New Zealand teams both Kiwis ran in unofficial mixed teams in the following day’s relay in which, for the record, the Swedes took out both titles. For the two New Zealander’s, however, it was the long distance which produced two superb performances. Compared to the middle distance, for which route choice was very short scale, the long distance featured some legs where it was essential to look very wide of the straight line – something not often featuring on home terrain. Both Zefa’s 14th place and Kaia’s 20th were the best Kiwi results for some time. Seemingly unfazed by his middle distance mishap, Braun took the men’s gold, albeit by only 17 seconds from Lovald of Norway, with Finalnd’s Tuoko Seppa collecting a second bronze. In the women Lundberg again had a winning margin of 3 minutes.

To put Zefa and Kaia’s performances in context, notwithstanding the missed two years of JWOC competition due to Covid, it’s worth looking at how their results stack up against previous NZL JWOC results. The New Zealand top 10 results for all distances at JWOC are shown below. Note that prior to the introduction of a sprint into JWOC in 2006, the middle was referred to as  the “short distance” and, in the early years, did not have a qualification race. Both sprint and long have always been straight finals although fields have varied in size depending upon the location of JWOC (2007 in Australia was a notably smaller field).

Clearly, Zefa’s runs early this month, and Kaia’s long distance feature prominently and stack up alongside New Zealand’s best JWOC performances. But, perhaps with an eye to the future, there are perhaps a few other things worth noting.  Firstly, NZL men have been more successful than the women in all three distances with top 10 performances in all three. Only Angela Simpson and Tania Robertson have achieved this among the women, and Tania’s result was way back in 1992. Indeed, aside from Kaia, Lara Molloy in 2018 and Laura Robertson (2013) there are no women’s performances from the last 10 years in the lists. More specifically it can be seen how things perhaps go in cycles, as among the women the bulk of the listed performances come between 2007 and 2012 as a group of young athletes went through the JWOC years together and pushed and encouraged each other. This is less noticeable in the men but also applies between about 2012 to 2016. The importance of having a coherent, competitive group cannot be stressed enough. Not unnaturally, the same names crop up again and again, some of whom are now prominent in the elite grades both nationally and at World Cup/WOC. But it is also worth noting how many others who generally figure in WOC teams do not appear in any of these lists, and equally how many names in them no longer regularly feature on the orienteering scene – success at JWOC level is neither a prerequisite nor a precursor to elite success.

Following the HP Zoom meeting reported in the October news, a second meeting was held last weekend. This was more in the way of a simple catch up, with about 15-20 participants, rather than a lengthy discussion and was not recorded. However, several people have asked about it, so here is a brief resume.

(1) Selection calls for both JWOC and WOC2023 should appear on the ONZ website shortly. Self-nominations will be due by 15 January. Trial dates have already been announced with the first JWOC trials being on the weekend of 18/19 March in Canterbury and the ONZ Champs at Easter being trials for both JWOC and WOC.

One proposed difference for JWOC2023 is that all those nominating will form part of a “JWOC Training Squad”. Kieran Woods, who coached both the 2022 WUOC and Southern Cross teams, has volunteered to act a coach for this squad and help, along with Florian Schneider, in preparing and following up on training programmes and giving advice. Thanks are due to both Kieran and Florian for volunteering to take on these important roles.

(2) Plans are underfoot for training camps in 2023. The first of these is proposed to be based at St. Arnaud (Nelson Lakes NP) on 24-26 February and will feature a mix of physical (mountain running) and technical orienteering training. Scott Smith has volunteered to do the organization and has already asked for expressions of interest (hopefully all those aiming at JWOC/WOC).

A second camp, in the formative stages, is aimed at being based around the NI Secondary Schools Champs in Manawatu/Whanganui areas from 21-25 April and will incorporate the NISSC races and additional training on the two days afterwards (including Anzac Day). More detail on this will be available later. Canterbury University OC is also planning on holding an ultralong on the weekend of 13/14 May and there is a suggestion of building a second physical/technical oriented camp around this.

(3) There was an update on the NOL and NSL programmes. For the NSL, as has already been advertised, there will be two races in Taupo in association with the Katoa Po weekend, and permissions are being sought for a KO sprint post ONZ Champs on Easter Tuesday in Hawkes Bay. The complete NSL programme is therefore as listed last month:

The announcement of the programme for King’s Birthday means that the NOL programme is now finalised as:

With an eye on sprint WOC2024 in Scotland (and also 2026 which will be in Italy) there is a hope that NZL can field a full team at the European Sprint Champs for Round 3, including giving experience to some of the younger athletes yet to run at this level. As part of that goal it is intended to use the Katoa Po sprints and the post ONZ KO sprint as fundraisers. Any offers of sponsorship towards this will also be gratefully accepted.

(5) There was also a chance for Florian Schneider to repeat his offer of help in coaching and training matters and the discussion ended with a slightly more detailed look at some of the legs from JWOC2023 forest races. It was agreed that these discussions/catch-ups are worthwhile and there will probably be another timed for post-Oceania, pre-SOW.

Little more than a month after Labour Weekend the SI Regional Champs saw the first race of the NSL season as well as two NOL races. The sprint returned to one of the best town maps in the country – Geraldine. Although planner Joseph Lynch opted not to introduce any crossings of the main road his courses, confined to the edge of town, the river valley and local school and surrounds were technically challenging. Not unexpectedly the wins in the men and women went to Matt Ogden and Lizzie Ingham respectively, with, for both of them, the closest challengers coming from the 20E classes on the same courses. In M20E Felix Hunt had the first of three wins over the weekend, while W20E saw the first of 3 close duels between the Babington sisters, with Katherine coming out on top by 2 seconds.

The original plan had been for Saturday to see the middle distance in Burkes Pass on the way in to Tekapo. However, sneaky felling meant that the middle was switched to Sunday and Lake Tekapo Regional Park, the venue also for the long distance. With Matt coming down with a bug overnight, the anticipated clash between him and Joseph did not eventuate and Jospeh was untroubled in having a 14 minute win over Chris Forne. Lizzie’s biggest problem seemed to be reading some of the minute detail on the 1:15000 map, but she was still untroubled in winning W21E, again from Sara Prince. Felix, similarly, has a clear margin in M20E, while in W20E Anna Babington took revenge over sister Katherine by just under 2 minutes.

With most of the mapped forest used for the long distance it was always going to be a challenge to plan something different for the changed middle. Nevertheless the fast, largely downhill courses produced by the Bixleys provided some real speed orienteering in a forest setting, even if the results did not shift very much, with big winning margins for Joseph, Lizzie and Felix, and Katherine edging out Anna.

With the middle and long distances contributing to the NOL, the points table after the first two rounds has the following leading positions. Note that, as above, only the best 3 scores over the first 3 rounds count (number of scores in brackets).

Briana Steven, now based on the west coast of the US had a long drive to compete in the recent US National Championships but made the drive well worthwhile with 3rd place in the sprint, 2nd in the middle, and just missing out on 3rd in the long by 3 seconds. Meanwhile, back in September (sorry, I’m behind the times) Gene Beveridge and Imogene Scott, now resident in Vancouver, had wins in all three races at the British Columbia Orienteering Championships, including 2 very technical looking middle distances.

On the other side of North America, Penelope Salmon has been running cross-country for Harvard during their fall season, being third Harvard finisher in the college women’s team that won the Ivy League Championships, and also being a team counter in the NE Region NCAA Championships.