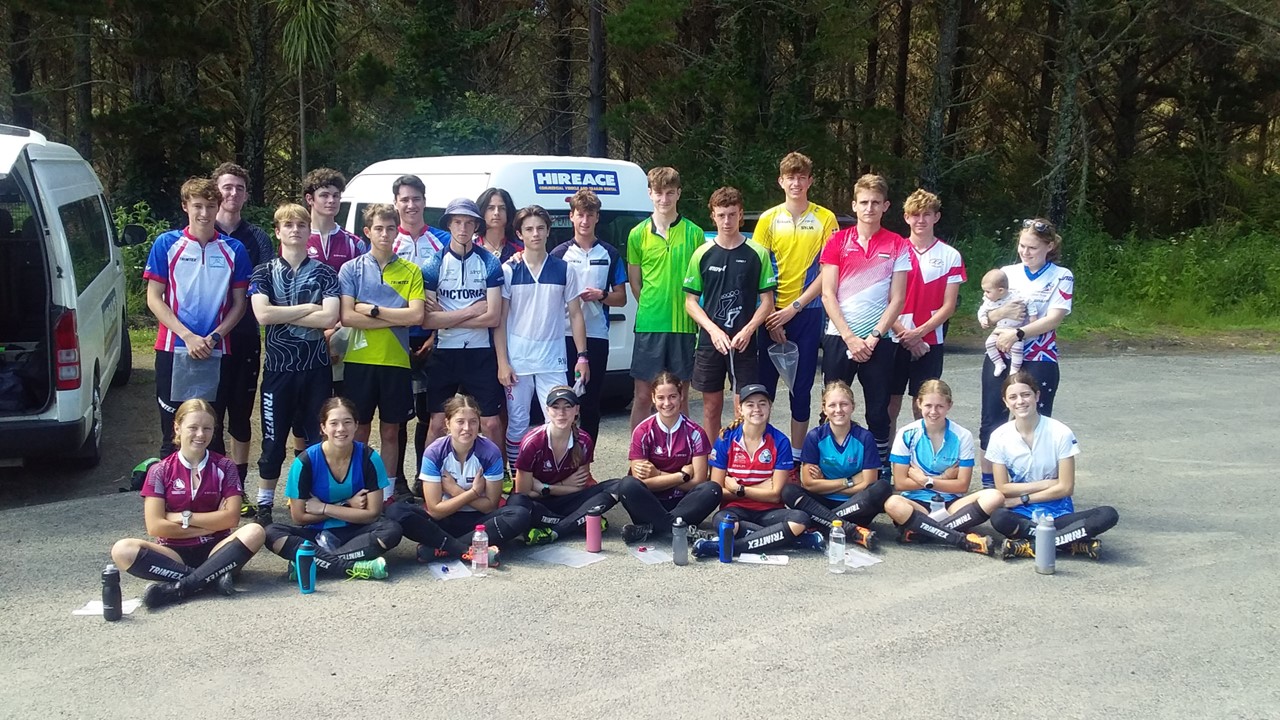 Another year over, more or less, finishing with the Under 23 HP Camp and some excellent news regarding Prime Minister’s Scholarships – perhaps a sign that we are finally making headway with being recognized as high level sport. Also another recognition for Tim Robertson, being selected in the NZ team for the World Cross-country Championships. Now it’s time to start planning for 2023 and, hopefully, a continuation of an upward trajectory for the sport – hence the prominence of the first 2 articles below!

The Junior World Orienteering Championships 2023 will be held in Baia Mare, Romania from 1-9 July 2023. JWOC will consist of individual sprint, middle, and long distance races, a sprint relay and a forest relay.

Previous performance at JWOC and/or comparable events may also be taken into account.

All athletes interested in selection for the 2023 JWOC team shall notify their interest, year of birth, and cell phone number to the Convenor of Selectors Al Cory-Wright (alistaircorywright@gmail.com) by 15 January 2023.

All interested athletes will named as part of a JWOC2023 Training Squad. Kieran Woods has agreed to act as coach of this squad and to advise and help athletes in their preparation for trials and, ultimately, JWOC. Additional advice will be available from overseas advisor Florian Schneider.

Athletes will be expected to:

The World Orienteering Championships 2023 are scheduled to be held in Flims Laax, Switzerland from 11-16 July 2023. WOC will consist of an individual middle and long distance races, and a forest relay.

Selection Criteria
As per the Orienteering NZ G1 Selection Policy the 2023 WOC team will be selected on the basis of
For New Zealand based athletes:

All athletes interested in selection for the 2023 WOC team shall notify their interest, year of birth, and cell phone number to the Convenor of Selectors Al Cory-Wright (alistaircorywright@gmail.com) by 15 January 2023.

Athletes will be expected to:

Orienteers have scored highly in obtaining HPSNZ Prime Minister’s Scholarships for 2023. Four – Nathan Borton, Ronan Lee, Molly McGowan and Zara Stewart – have received athlete scholarships, which contribute to University fees etc. In addition, and in line with his appointment as JWOC Training Squad Coach (see above), Kieran Woods is the first orienteer to receive a coaching scholarship. This will be used to support his activities in the JWOC role. Applicants for PBS have to be endorsed by ONZ and the success of these 5 is a testament to the excellent, personalized, endorsements that are provided by Christo in his role as General Manager.

For the first time since 2016 the Under 23 Camp was based at Houghton’s Bush Camp at Muriwai. Although the venue was much the same, for the first time the camp had a series of invited talks. The first of these was Tracey Lambrechs of DFSNZ talking, on the first night of the camp, about what an athlete’s responsibilities are with regard to drugs in sport, the dos and donts, what the drug testing procedure is, and what your rights are if tested. It is worth remembering  that over the years there has been testing carried out at the ONZ Championships at least twice, and there are a few orienteers who have even been tested out of competition – so it does happen.

Orienteering started on the following day with route choice and mass start relay training on the Barlow Road map in Riverhead Forest. Route choice is one of the perennial exercises at the camp and intended as far as is possible to give practice at picking both long and short leg choices. Although Barlow Road is not ideal for this, the long legs did produce a variety of choices, not just in basic route but also in the details of approach to the control.

The relay mass start exercise followed on from the abnormal number of DSQs that NZL teams suffered in 2022 and had 6 variations. Participants swapped maps with others at the end of each so as to ensure that the same people did not always have the same variation. As a reminder to all, there is no excuse for (i) not checking the code, (ii) not checking that your SI has registered!

The orienteering part of the day finished with a middle distance course. However, the evening saw the second of the camp presentations, this time from Jeni Pearce of HPSNZ on nutrition. This included a lot of useful advice, in including carbohydrate intake, managing hydration, and even how to make your own sports drink! Jeni’s presentation is posted on the ONZ web page.

Friday was spent on the Muriwai end of Woodhill Forest although proceedings were held up somewhat by the provided key refusing to open the gate! We also had a visit from our HPSNZ main contact, Katherine Oberlin-Brown, who chatted to the athletes and, accompanied by Yvette Baker, ventured into the forest to watch the action. This consisted of a series of O intervals, each of which was preceded by a running interval. This was by way of providing training ideas to, in particular, prepare for navigating when under physical stress, and can also be easily adapted to sprint training. With time squeezed by the key delay, a planned window exercise was abandoned in favour of a course adjacent to the coastal strip, mixing in the rough open dunes with the forest.

The weekend was largely devoted to sprint training, but started with the 3k/5k time trial on the Lovelock Track in association with Owairaka Athletic Club. Upwards of 40+ athletes turned out for a series of paced trials and the chance to set a PB for a distance. From the point of view of the orienteers this was an opportunity to set a baseline time which can then be used to gauge progress as we move into 2023. As previously commented it is also true that a 3k/5k time at a certain level provides an excellent guide as to potential to be competitive at sprint orienteering.

The actual sprint training, at Green Bay HS on Saturday and Western springs and Epsom on Sunday, was entirely in the rain. Exercises focussed on mass start intervals simulating racing but also requiring rapid route choice. The four mass start 1k courses on Sunday, with athletes divided into groups of 7 and featuring promotion and relegation between groups, proved to be a great success in terms fostering the competitive instinct and keeping up intensity throughout the session. Sunday evening concluded with talks on sprints in general, and Joseph giving his personal experiences in the WOC knock-out sprint in Denmark.

Monday saw a return to Riverhead, this time the Robinson Road end of the forest. A somewhat novel exercise started proceedings with eight athletes asked to put out a single control tape and then draw, from memory, their own map that others could use to find it – thus promoting clear route planning and memory of key features from those putting out the tapes, and an ability to screen out unnecessary (and unmapped) detail from those using the sketch maps. What eventuate was a wide variety of artistic merit (or lack thereof) but a generally highly successful (and fun) exercise which demonstrated the necessity of having clear planning, with readily identifiable features, in choosing a route.

This was actually a long day, with the simplification followed by a pairs memory exercise, a corridor, and, finally, to finish off on a hot day, a middle distance course. What is more, the evening saw the final outside presentation with Carolyn Donaldson and Nicola Lewis-Clifford giving a highly interactive talk on High Performance Life – how does your sport fit into and around everything else in life?

So, to Tuesday and the final act – the camp champs on Grassy Track a (relatively) new map at the very rear of the camp. Set as a middle distance – 4.1k for the men, 3.1k for the women, the two JWOC forest representatives Kaia and Zefa were clear winners in 36:19 and 33:49 respectively, with minor placings going to  Katherine and Rachel in the women and to Dougal and Jacob in the men. Hopefully, a worthwhile, but tiring, week for all. Thanks and congratulations to all the athletes for their efforts (including the cooking), and special thanks to Yvette Baker and Sarah Stewart for helping throughout the week, to Christo for being an extra van driver when required, to Callum Wishart for running several errands in his car, to Joseph Lynch for his help in various ways, and to Lara Molloy and Martin Crosby for putting out tapes both on the day and beforehand, to Geoff and Lisa Mead for doing  a lot of the preparatory work, and, finally, to Sanitarium for their generous sponsorship of breakfast food.

The proposed new system for the next several years looks like:

This would mirror the current situation in Europe where the European Championships immediately prior to a sprint WOC is entirely sprint based, and prior to a forest WOC is forest based. If IOF accept this proposal, which will be discussed at the next IOF Council meeting in January,  the first elite sprint Oceania Champs will be at the Super City Sprints in 2024.

Congratulations to Tim Robertson who has been selected in the New Zealand team for the World Cross-country Championships which will be held in Bathurst on February 18. This follows Tim’s performances in the national championships earlier this year.

The first major event of 2023 is, of course, the Oceania Championships in Tasmania. Given the cost of travel there are relatively few Kiwis heading across the Tasman, although there are healthy representations in both M20E and W20E. The lack of numbers means that the traditional Australia-New Zealand Challenge is confined to a very few age classes. In terms of the elites, of most importance is that the winners of 21E in middle and long distance will get personal places at WOC2023 in Switzerland.

The first domestic event of the new year will be the 2023 SI Championships in Nelson, involving a sprint in Nelson, a middle on Rabbit island, and a long distance at St. Arnaud. Entyries close on 13 January and can be made at https://www.entero.co.nz/evento.php?eventName=SIOC2023 . The two forest races are part of the National O League.

A week later Southern O week is in Christchurch and features two races (an individual and a KO sprint) and s print relay as part of the National Sprint League. For perhaps the first time in New Zealand cash prizes are on offer in the elite grades. Again entries can be made on Enter O at https://www.entero.co.nz/evento.php?eventName=waitangi-2023 and close on 23 January.

Finally, after an absence of many years the Taranaki Turkey Trot returns on 18 February. The 2023 version will involve a mass start and include multiple maps, including both bush and sprint areas. Entries open mid-January.