Rather belatedly, Merry Christmas and Happy New Year to all – obviously my New Year’s resolution is to not be late with HP News in 2017. That said, December has been a quiet month, albeit marked by both the U23 camp and the Junior camp. I was hoping to have a report on the former of these but unfortunately my correspondents appear to have fallen silent,. As a result I have pinched some comments from Gene Beveridge’s personal reflections in his blog (including the front image of a morning jog in the Alpine environment)!

The U23 Squad Camp was based at Mount Cheeseman Lodge at Castle Hill, close to the inspiring mountains and terrain that was sampled by many more at the Alpine O at Labour Weekend. Several of the National Senior Squad members were in attendance as coaches and as Gene comments”

I spent the past week in the wonderful escape of Castle Hill as a coach on the ONZ U23 Squad Camp. This was a great opportunity to interact with the up-and-coming elites of NZ orienteering and bust out some quality hours for myself…”

The camp concentrated not only on technical but also physical training including a long mountain run, helpfully recorded by Gene both photographically and on Strava.

Gene also points out that the benefits of training camps such as this extend not only to the athletes participating but also to the coaches, and if timed correctly can be a big benefit even relatively close to a major event.

“The training camp routine is one of my favourite ways to live, although not sustainable, it is highly addictive and a few such weeks per year can have big advantages to the greater training progression when timed well. My favourite times for such a week would be either the first week of a training block (to blow out the cobwebs and get your body up to its previous level before returning to a sustainable progression) or 4 weeks out from race week (as a big push to extend your fitness towards a specific race with enough time to return to consistency for a stable taper)…”

The camp finished with a champs on Hogs Back (as used at Alpine O). 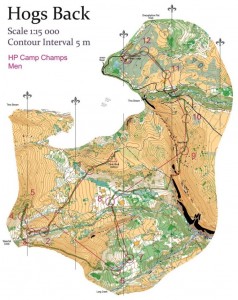 The High Peformance camp to be held after the Waikai O weekend is taking shape. From Waikai, accommodation will be in Alexandra on 6-8 February from where we will access Butcher’s Dam and Naseby maps on the Tuesday and Wednesday. On the Thursday the camp will move to Wanaka taking in maps in Cromwell en-route. On Friday and Saturday morning training will be on maps around Wanaka, before departure on Saturday afternoon.

An 8 seat vehicle has been booked from Queenstown airport on 4 February due to be dropped off back at Queenstown on the afternoon of 11 February. The cost of this is likely to be covered by the grant received, but not wholly spent, for the 2016 HP Camp. At this stage confirmed numbers are small (Renee, Lizzie, Chris, Nick S, Gene, Matt O, Cameron T and Cameron d’L) but to confirm transport needs others need to indicate their attendance asap. Group accommodation is also being sought at Alexandra Holiday Park although it is likely that tents may be required in Wanaka.

This camp falls about 6-7 weeks before the JWOC/World games trials, so as Gene suggested in his comments above, is well timed to provide an initial indication for triallists where they stand.

HP athletes who cannot attend the HP camp, or indeed those who want 2 camps, are more than welcome to attend the Wellington Regional Camp. This will take place over Wellington Anniversary Weekend and will start at Mt Lees (north of Bulls) on Saturday 21 January. Sunday’s training will be on Scotts Ferry, and the camp will finish on Osgiliath in Waitarere Forest on the Monday. Accommodation is being sought in Feilding. Those from outside the Wellington area who wish to attend should email either [email protected] or [email protected] as soon as possible.

A reminder (see November HP News) that expressions of interest for selection for JWOC and the NZ Schools team for the Schools Test Match are due on 15 January. Interest for WOC selection is due on 1 February. Additional to these is the selection notice for the World Games 2017, as published on the ONZ website on 13 December.

The 2017 World Games Team (2 Men, 2 Women) will be held based on the following selection events:

The following existing orienteering areas are embargoed from the date of the this notice until the events have been held:

Overseas-based athletes should nominate and attend a WRE (Sprint and Middle) at any date up to and including 26 March.  (Suitable events include the Danish Spring Cup 24-26 March, and events in Portugal in 18-19 February and 4 March).

The team will be selected by 31 March 2017. All orienteers interested in selection for the 2017 World Games team must register their interest, year of birth, and cell phone number to the Convenor of Selectors Al Cory-Wright ([email protected]) by 15 January 2017.

Finally, a reminder that the 2017 SuperSeries will consist of four rounds.

Round 4: June 3-5 (Queen’s Birthday) – Christchurch (formats to be decided)