New Zealand has matched its previous best result in the WOC sprint relay finishing 12th in the 2018 event run in Riga this afternoon. The NZL team of Laura Robertson, Tim Robertson, Cameron de L’Isle and Lizzie Ingham were just over 5 minutes behind winners Sweden who successfully defended their title from last year. 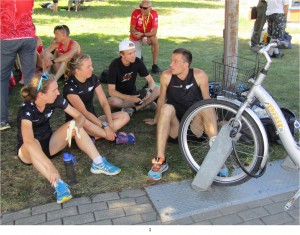 Laura, on the first leg, hung on well to the fast pace and handed over to Tim in 14th position and less than a minute down on the leaders. Following on from his epic run yesterday Tim produced the second fastest time on leg 2 as he moved NZL up into 6th place as he handed over to Cameron. Running at his first WOC Cameron admitted to running out of gas after the arena run through and dropped 8 places as he handed over to Lizzie in 14th place. Aided by a mp for Spain, and suffering from lack of sprint training in her recovery Lizzie still pulled NZL into 12th at the finish, matching the result achieved in Scotland in 2015.

At the front of the field Sweden led all the way to retain their title wiht most of the drama coming for the minor placings. The Swiss started leg 2 in 2nd place followed by Norway, Hungary, Ukraine and Russia in that order. However, a fabulous second leg by Kristian Jones moved GBR into 2nd place ahead of the Swiss and Norwegians as Hungary and Ukraine dropped badly. By the end of the second mens leg Czech Republic had joined Norway in joint 2nd place behind the Swedes, just ahead of Switzerland and Russia. The stage was now set for the gold and bronze medallists from the women’s individual sprint. Bronze medallist Judith Wyder quickly had Switzerland back into 2nd place but well behind the Swedish team. 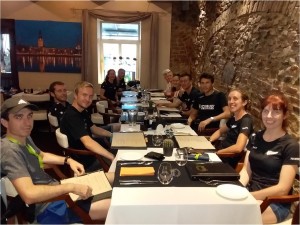 However, World Champion Maja Alm was on the move and starting nearly 1 minute outside the medal positions began moving through the field. Running the fastest leg time by nearly 40 seconds it was enough to give Denmark the bronze as Norway edged out CZE and RUS for the other podium places.

Attention now switches to the forest races with the middle distance on Tuesday, relay on Thursday and the long distance on Saturday. The middle distance will feature Matt Ogden and Tim in the men and Laura and Lizzie in the women. The map covers the ravine of the Gauja river valley with side deep side valleys and much light green, relatively dense vegetation promised. 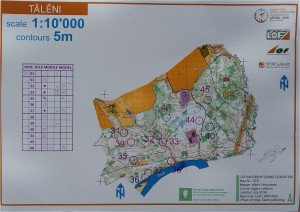 Model map for the middle distance

After the visit to the model event this morning the general feeling is that the forest is cleaner than expected although some of the low topography on the flatter areas (e.g. one contour small hills) is quite difficult to identify. The vegetation is certainly well mapped although many of the demonstrated control sites were close to obvious features, something that will not be the case tomorrow.

Don’t forget as well that the World MTBO Championships also start on Tuesday in Austria with Conal Boland-Bristow in the Senior Men and Tegan Knightbridge and Georgia Skelton in the Junior Women. The MTBO Champs begin with the mass start race.