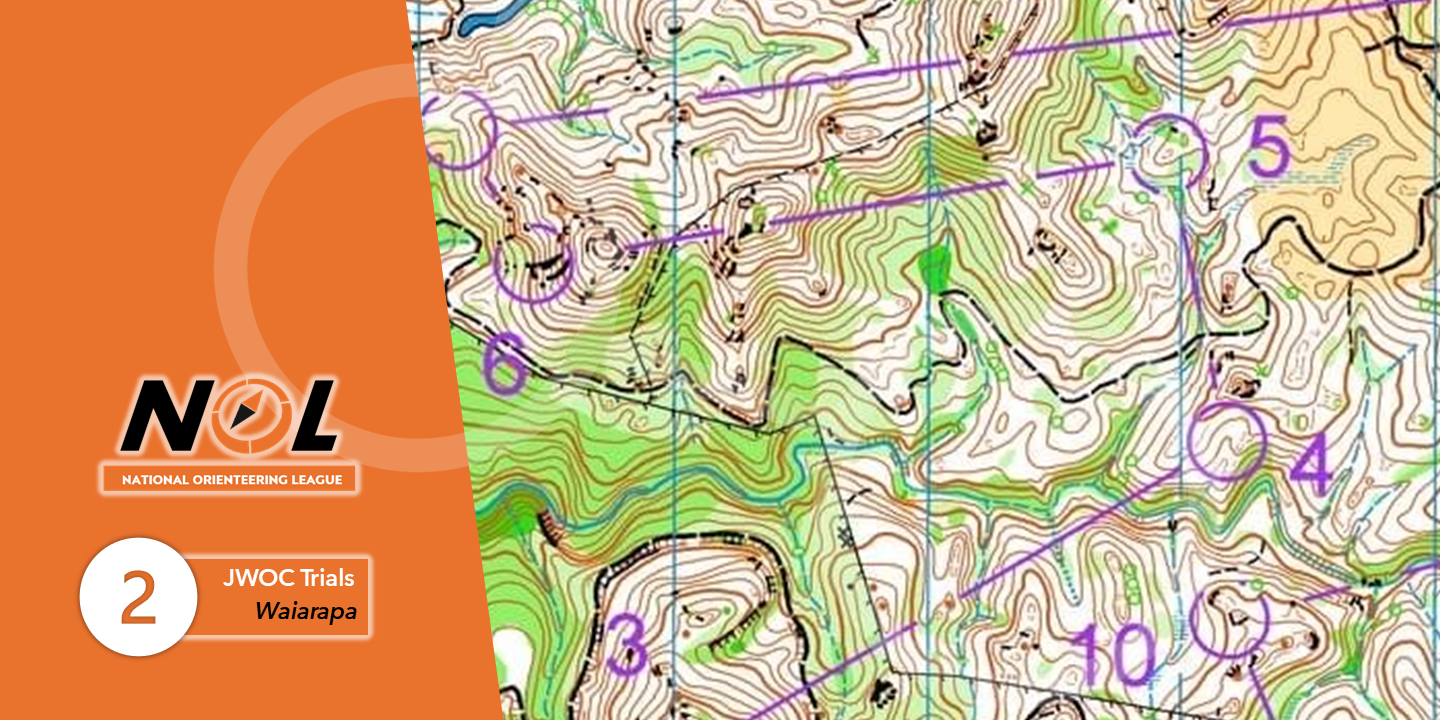 The demanding Waiarapa terrain did not disappoint at the National Orienteering League (NOL) Round 2 / JWOC trials over the weekend. Both Saturday’s Middle and Sunday’s long provided robust challenges to team hopefuls, all vying to prove their worth and secure a spot in the 2022 New Zealand JWOC team.
The varied nature of the sometimes gentle, sometimes brutal gully spur terrain with unique hill systems and physically demanding pine forest truly tested our leading juniors. The Knolls of Leary offered up excellent micro-route choice and tight navigational challenges expected of a middle distance, while the tougher, sizeable hill systems of Mingimingi provided an excellent platform to test competitors with relentless route choice in the long.

As described in the weekend preview, it was a weekend for our best Juniors to shine – and for Nelsons Zefa Fa’avae he most certainly did. Fa’avae took two wins from two starts, cementing his standing as one of the country’s leading under 20 racers, particularly in the terrain disciplines of the sport (and claiming a favorite tag for his home nationals in Nelson this Easter in the process).

Fa’avae posted two dominant displays, leading the middle from the start in a tight battle with Will Tidswell before pulling away in later stages of the course – winning by just over 2 minutes. He then backed that up on Sunday’s long to take victory by 4 minutes, despite making two small mistakes near the end of the course.

Tidswell battled valiantly over the weekend, coming in runner up in both the middle and long distance. In Saturday’s middle Tidswell showed his form, taking the lead of the course at the mid-way point before falling victim to the tricky course setting – making two 1-minute mistakes dashing any chances of victory. Ryan Moore rounded out the podium for the middle distance finishing a further 2 minutes back. The podium in the long had a similar flavor with only change being Fergus O’Neil edging out Moore for that third spot by just 12 seconds (over the 90-minute race).

Saturday’s middle distance saw a tight battle in the women’s grade with the top three separated by a mere 46 seconds. Aucklander Penelope Salmon continued her winning ways, seeing off a strong challenge from Kaia Joergensen to take a 12 second victory. Rachel Baker rounded out the podium in third place. Salmon, Joergensen and Baker all lead the race for periods with Salmon timing her run to perfection after early errors to take the lead when it mattered.

Mingimingi’s long test suited Joergensen, where a consistent performance throughout the course saw her take a solid three-minute victory over Katherine Babington. Joergensen took the lead early on the 78-minute course and never looked back. Rachel Baker repeated her form from the middle, registering another third place for the weekend.

Part 2 of the 2022 JWOC trials will be held in conjunction with the NZ Orienteering Champs in Nelson at Easter. With some tight racing across both grades, especially in the fringe placings it will make for interesting following to see who books their spot in the team (6 men & 6 women) for JWOC in Portugal.