As we await the start of the 2018 round of World Championships, June has seen the Pinestars-Bushrangers Test Match and some keen individual competition at Queen’s Birthday in Auckland. This also saw the culmination of the SuperSeries for 2018 with well deserved senior titles going to gene Beveridge and Imogene Scott. Also below a few interesting snippets from IOF, an update on Kiwi performances overseas, and what and when to watch JWOC.

Little more than 7 weeks after the ONZ Championships, come the first weekend in June everyone was back in Auckland for Jaffa2018 including the home leg of the Pinestars-Bushrangers Test Match. Despite the dire weather forecast the rain largely held off although it was quite eerie running through the dark forest on day 3 with thunder rolling around overhead.

Day 1 saw a double middle distance on Lake Rototoa, first used for the Oceania Championships Long Distance last year. The second race was a reverse chasing start with the fastest morning finisher off last – a format which led to a mass of people tending to track each other through controls, and an agreed decision to use only the morning race for the Test Match. Nevertheless the overall placings largely reflected the morning results, although Max Griffiths in M20 was perhaps the odd one odd, having multiple problems in the afternoon following an excellent morning run. Both Matt Ogden and Gene Beveridge showed themselves to be in good form pre-WOC and were separated by only 15 seconds in M21E over the two races, and ahead of top Aussie Simon Uppill. There were also strong runs from JWOC-bound Marisol Hunter, Briana Steven and Meghan Drew in W20. 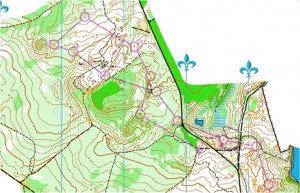 The first part of M21E on Lake Rototoa am

Days 2 and 3 returned to Hedley Dunes, scene of the ONZ long distance championships. In that event in M21E Gene Beveridge had a margin of just under 3 minutes from Tommy Hayes in a time of just under 2 hours. On day 2 the top two Kiwis were the same but this time Gene’s gap to Tommy was doubled, and Simon Uppill managed to get between them. In W21E there was an intriguing race between Natasha Key, Imogene Scott and Krystal Neumann. Although a third Australian Tamsin Moran led through controls 1 and 2, thereafter one out of Natasha and Krystal were always in the lead, with Natasha hitting the front for the final time at #18. However, Imogene after dropping over a minute on the first control had moved steadily up, hitting 2nd place at control 8 and seemingly poised to take the lead. Unfortunately, 2 and half minutes on control 9, a minute on control 10 and another 2 on control 11 put paid to her challenge although she steadily climbed back to claim 2nd behind Natasha, hauling in Krystal 2 controls from the end.

In the 20’s there were clear wins for Aston key and Jenna Tidswell, though the battle for 2nd in M20 was extremely close with Max Griffiths holding out Kurtis Shuker by just 2 seconds. 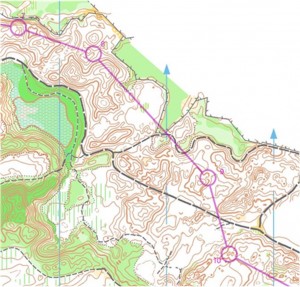 After day 2 the Australians had fallen further behind in M21E, M20 and W20 but taken the lead in W21E.

On the western end of Hedley Dunes on day 3, Gene’s form continued unabated. After being 8 seconds slower than fastest on leg 1, he then led all the way finishing with a 7 minute margin over Scott Mcdonald who was perhaps a surprise second place ahead of Simon. In W21E Natasha was again in charge, with Krystal 2 minutes back. Tamasin Moran, after her strong runs on day 1, made it an Aussie 1-2-3 with Imogene pushed back into 4th place. The racing was closer at the top of both M20 and W20. In the former Max continued his good weekend by taking the prized scalp of Aston Key by 13 seconds, taking advantage of small mistakes by Aston at 5, 6 and 16. The margin was 1 second closer in W20 in which Jenna took her second successive win over Marsiol.

Once again W21E went to the Australians but NZL extended their margins in the other 3 classes to take out the overall Test Match and regain the Aspin-Key Trophy.

The trophy goes back on the line at the Australian Champs Carnival in late September/early October.

Queen’s Birthday was, of course, the final round of the 2018 Superseries. Going into the weekend leaders were Matt Ogden (M21E), Amelia Horne (W21E), Joseph Lynch (M20) and Marisol Hunter (W20), although it was clear that there were likely to be some changes.

Despite his victory on day 1, Matt’s chances were rather destroyed by his involvement in the planning of days 2 and 3, meaning that ultimately, with 7 events to count, he only competed in 6. In his absence the strong performances by Gene Beveridge on days 2 and 3, coupled with his second place behind Matt on day 1, allowed him to sneak past and take the overall title. Although prior to the weekend Cameron Tier had looked comfortable in 3rd place, his morning DNF on Lake Rototoa ended up leaving him 13 points adrift of Tommy Hayes, who over the weekend was never out of the top 4 New Zealanders. So the final top 10 looked like this…. 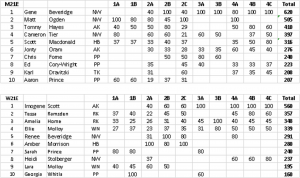 In W21E Amelia’s lead quickly vanished with Imogene’s dominance over the weekend giving her a commanding final total and her second SuperSeries title in a row. Three consistent performances from Tessa Ramsden pushed her into second place, while Amelia just managed to hold out Ellie Molloy for 3rd place.

Prior to the weekend Joseph Lynch had looked a sure winner in M20, and despite being hampered by injury which saw him pass day 2, and Max Griffiths excellent form, this proved to be the case. Daniel Mockton, who started the weekend in 3rd place, finished in that position despite being overtaken by Max by just 3 points. 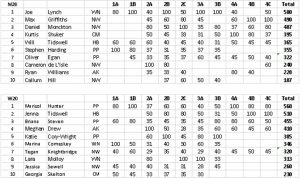 In W20 Marisol had held a lead over Katie Cory-Wright and Jenna Tidswell, but, with Katie away overseas in preparation for JWOC, it was left to Jenna to mount the challenge. This she duly did with two wins over the weekend, with the final 50 point difference reflecting Marisols advantage over Jenna on Lake Rototoa. Briana Steven held out  fast finishing Meghan Drew for 3rd.

There were a few interesting outcomes from the latest IOF Council meeting held in Finland in mid-June. Perhaps the most immediate of these is that, after several years of procrastination, the remainder of 2018 will be a trial period for the use of 1:10000 as a scale for long distance events. In terms of IOF events this applies to WRE and Regional Championships only. The actually comments on the issue, from the Foot O Commission  included:

Based on this the decision is that the IOF Event Adviser may approve 1:10000 map scale for long distance competitions if;

The mapping of the terrain cannot be correctly read at 1:15000.

Also of potential interest for the future is a proposal from Norway to add a Sprint Relay to the JWOC programme. The IOF is broadly supportive of this but have commissioned a review of the entire JWOC programme. Given past such proposals (e.g. WOC splitting into forest and sprint in alternate years because of the heavy programme when combined, WMOC having a middle distance added) one likely outcome is perhaps that the Sprint Relay will be added at the expense of the qualification race for the middle distance.

Also there will be a team of 3 at the 3rd round of the IOF World Cup in Norway in late August: Lizzie Ingham, Cameron de L’isle and Tim Robertson, and these three will be joined by Laura Robertson for the 4th and final round in the Czech Republic in October.

The main overseas event in June with Kiwi interest was Jukola with five New Zealanders in the field. In the 4 person womens relay Lizzie Ingham was on the anchor leg for the Halden 2 team which finished in 29th place out of the 1518 teams that finished. Laura Robertson took on the first leg for the Finnish team Rajamäen Rykmentti which finished 40th, and Kate Morrison was on the second leg for OK Linne 2, who finished 64th.  Katie Cory-Wright guested for Team USA, also running leg 2. However, pride of place went to Tim Robertson who on the first leg for Koovee came in in an amazing 10th place. Sadly, the 4th leg runner mispunched!

Finally, last weekend, Lara Molloy, who has been training in Norway fronted up in the three races at the Norwegian O-Festivalen, finishing highly respectably in 13th in the sprint, 11th in the long, and 20th in the middle, all in W20E.

JWOC is, of course, almost upon us. The programme for Hungary is as follows: Monday 9 July – Long; Tuesday 10 July – Sprint; Thursday 12 July – Middle qualification; Friday 13 July (!) – Middle final; Saturday 14 July – Relays. At this stage there is no apparent information on either Eventor or the website http://jwoc2018.hu/ about live coverage, but keep checking.

The same week 18 New Zealanders line up at WMOC in Denmark (http://www.wmoc2018.dk/), while this coming weekend many of the JWOC team, plus a few extras turn out at the European Youth Championships in Bulgaria (http://eyoc2018.eu ), and then from 17-21 July in Finland we have the World University Orienteering Championships (https://www.wuoc2018.com). So plenty to watch out for, and WOC still to come!