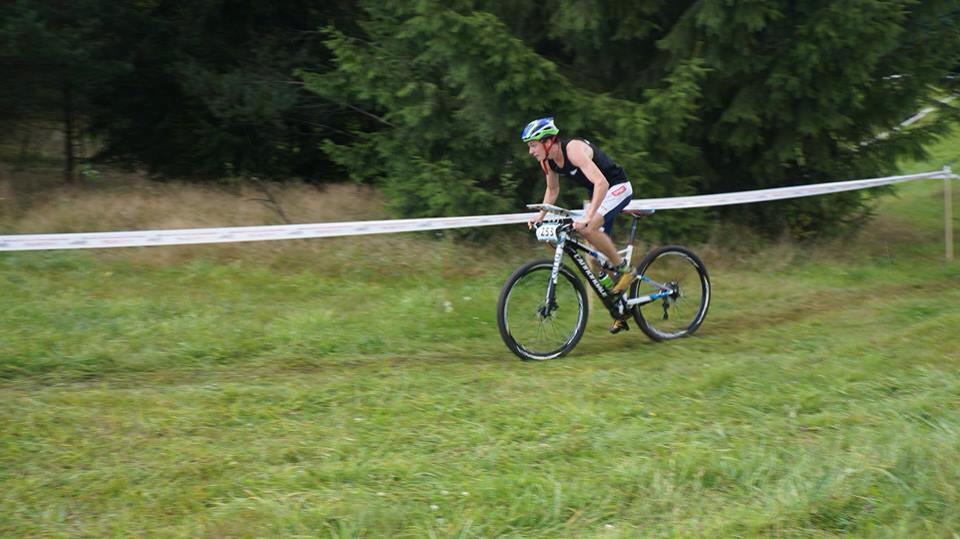 The first day of competition was  the Mixed Sprint Relay where the New Zealanders used this event to get prepared for the main individual competitions.

The second day of competition was the Sprint Distance.  Tim lost some time and ended up just 3s behind the winner in the M20 grade, Oskar Sandberg (Sweden).  Marquita Gelderman won the W40 grade by 1m41s, her first gold of the competition week.  Rob Garden managed to come 4th in the M60 grade, 55s down on the winner in his grade.

Tim commented after the sprint:

“It was a very wet and muddy race today at the world champs sprint. I had a good ride but lost about 20 seconds missing a track and having to ride through the forest to get back onto the correct one.”

The second event was the Middle Distance.  Tim Robertson managed to win by 1m08s to become a double Junior World Champion, after picking up a gold at the foot Junior World Orienteering Championships.  But Tim wasn’t the only winner from New Zealand, with Marquita Gelderman picking up her second gold medal of the competition in the W40 grade, 2m01s ahead of second place.  Rob Garden managed a 6th in M60.

Tim commented after the middle:

“Ontop of the World I became a double World Champ in today’s middle distance.
Had a great ride only losing time on two controls but I felt really strong and won by over a minute. We have a rest day tomorrow before the long distance, can’t wait!”

The final event was the Long Distance.  Rob Garden in M60 managed to pick up a silver 4m13s behind the winner from Finland.  Marquita Gelderman managed a bronze, 3m21s off the gold medal winner who had just 1s separating them from the silver medalist.  Tim Robertson managed to come 5th, 8m44s behind the winner Waldmann Andreas (Austria)

Tim commented after the long:

“The long today was really tough for me, I felt the pain of not having ridden for over two months before this competition due to focusing on orienteering. I rode 35km on soft sandy wet trails and by the end of the course i knew I had pushed to my limits, I don’t remember riding up the finish chute. Really amazed by the winner today, taking a lot of time out me which must have mostly been riding speed as I didn’t think I had any mistakes.  I finished in 5th place so I am really happy with today’s and the rest of the weeks races.”

Congratulations to the team for strong performances.