Three days now until WOC2016 kicks off with the sprint on Saturday, and while we still await tomorrow’s arrival of Ross, Roby and Kate, accreditation is dealt with and the other 7 members of team NZL are well into final preparations. At present we are accommodated courtesy of Magnus and Lisa and the Bengtsson family in two summers houses about 50k south of Stromstad, with the New Zealand flag flying high after being raised by three year old Matthias on arrival on Sunday. A relaxed atmosphere prevails below the rocky slopes of Bovallenstrand with Matthias and 6 month old Tove having 7 new aunts and uncles and one surrogate grandfather. 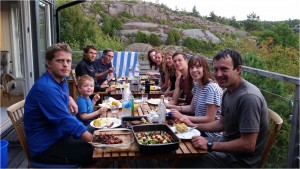 Following their appearance in the Nighthawk relay over the weekend, after being collected from Halden by Malcolm and Magnus, Monday saw a low key session for Chris, Tim, Gene and Imogene on Nasinge, as an introduction to WOC terrain. With the sprint looming Tim, Gene and Imogene visited Lysekil on Tuesday, while Chris, still with over a week to go before the long distance ran the course from the 15.8k Norwegian test race on Nasingeasen. Lizzie, after a 4th place in Sunday’s final WRE before WOC, contented herself with some light runs. In the evening we were duly joined by Laura and Jula coming up from Gothenburg into which Laura had just flown, but where Jula, arriving a day earlier, had been sprint training. 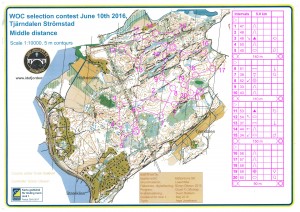 Back north today to Tjarndalen, on the outskirts of Stromstad, and either O-intervals (Lizzie, Tim, Chris and Gene) or the Norwegian middle distance test course (Imogene). Gene and Tim wearing head cams as the three men raced each other round the intervals has provided some interesting footage. Gene has posted some of this on his blog (genebeveridge.co.nz/videos/). Accreditation, a swim in the inlet, and back to Grebbestad for Laura and Jula to do some sprint training.

We move to the official WOC accommodation at Dafto on Friday and then the serious stuff begins.