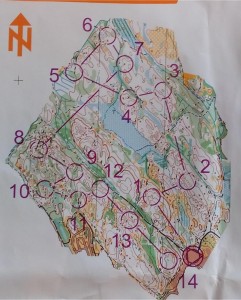 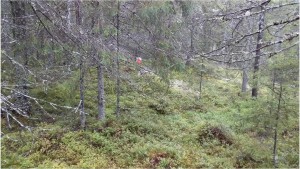 Model event control 1 from the SE

After 2 days of rain, but with better weather promised for tomorrow, WOC2019 is ready to go. Tuesday evening New Zealand time sees Cameron de L’isle, Tommy Hayes, Tim Robertson, Lizzie Ingham, Greta Knarston and Kate Morrison line up for the middle distance qualification. Today’s model event on Rudkogen typifies the strong NW-SE trend of much of the local terrain with the relatively clean running ridges separated by narrow, more densely vegetated valleys, although the competition areas are said to be slower running. With winning times set as 25 minutes for both the men and the women there is likely to be little margin for error. With each of the men’s and women’s fields divided into 3 heats, the top 15 from each heat qualify for Friday’s final. However, IOF have reintroduced a rule which was dispensed with some years ago, that any country with no qualifiers gets an automatic single runner (their best placed) in the final. Also of interest was that this afternoon’s technical model event actually took place in tomorrow’s arena, potentially giving us a sneak preview of the layout. Sadly resulting only in muddy shoes and a view of very bored volunteers demonstrating rhe start procedure. 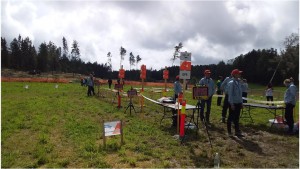 Organizers having fun at the technical model event 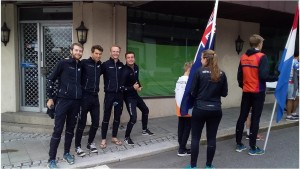 Start times (Tuesday evening NZ times) are as follows: Greta 2002, Kate 2044, Lizzie 2100, Cameron 2009, Tommy 2027 and Tim 2115. Live results and tracking can be found on https://orienteering.sport/event/world-orienteering-championships/middle-qualifications/#current . For those in Wellington following the Wellington Irish contingent, Ruari Short is at 2007 in the same heat as Tommy, while Conor Short is at 2047 in Heat 3 with Tim.

This evenings opening ceremony in Sarpsborg Town Square, following the public sprint race, saw teams from 48 nations marching in alphabetical order behind their national flags. This is perhaps therefore the only occassion when team NZL comes in front of Norway, Russia, Sweden and Switzerland although, sadly, Australia led the field!