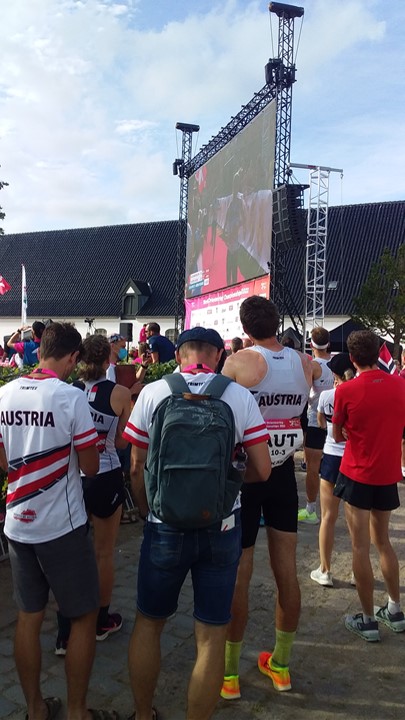 After all the preparation Team NZL suffered more bad luck in Sunday’s WOC sprint relay being disqualified for a mis-punch on the first leg. Amid the disappointment it is worth noting that the without this the team would have placed 12th, equaling the previous best performance at a WOC sprint relay. Add in the absence of potentially key runners and even black clouds maybe have a silver lining.

Penelope, on leg 1, actually ran a strong race but inadvertently took the wrong control at the end of the long leg after the arena passage – 10B rather than 10A on the map below.

Following Penelope, who was 15th through the handover, Joseph ran a really strong second leg recording the 11th fastest leg time before Tim motored through the field, albeit dropping a couple of places after the arena passage, to hand on to Imogene in 10th place. Unable to match the raw speed of the two closest runners to her, Imogene dropped a couple of places to still finish in what would have been a creditable position.

At the front of the field, after the crowd had gasped at some really big mistakes on leg 2 changed the complexion of the race, the last leg saw Megan Carter-Davies of Britain head out seconds ahead of Sweden’s Tove Alexandersson. These two had had a fabulous battle in the recent World Cup KO sprint final, but some excellent route choice by Tove saw, what promised to be an exciting finish turn into a progression as Sweden won by just over minute.