Lizzie Ingham and Tim Robertson will be NZL’s representatives in Friday’s WOC middle distance final following this morning’s qualification heats at Knatterudfjellet north of Sarpsborg. Lizzie finished a reasonably comfortable 11th in Heat 2 although not admitting to a clean run. Tim, having been in 7th place in Men’s Heat 3 at the split time with 1km to go then made a reasonably big mistake and ended up 14thof the 15 qualifiers, giving the rest of team NZL (and no doubt many at home) some anxious moments. In 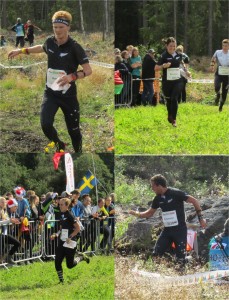 Tommy, Kate and Lizzie in the middle qualification finish chute, Tim checks his Emit as he leaves the final control 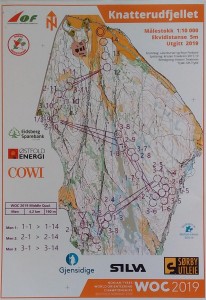 Women’s heat 1 Greta Knarston made a big error on control 3, misreading a series of iffs and overshooting the control as a result. This effectively put he rout of qualification, finishing ultimately in 22nd place justunder 3 minutes behind 15th. In Heat 3 Kate Morrison felt she had a relatively clean run but found it hard going physically and was 2 and a half minutes and 4 places off the cut. Indeed all the winners times in the women’s heats were about 4 minutes longer than the expected 25 minutes. For quite some time it looked as if Tommy Hayes in Heat 1 might squeak in, but with several of the fastest starters late off he ended up 22nd and a similar time off as Greta. In Mens 2, Cameron de L’isle was well outsidqualifying finishing in 31st place.

Elsewhere in the field there were no real surprises with most of the big names qualiying with relative ease, Paul Sirum from hosts Norway perhaps being the exception, missing out in Heat 3. This apart it was a successful day for the hosts with runers in the top 3 of 4 of the 6 heats. It was also a relatively good day for Australia with Simon Uppill, Krystal Neumann and Bridget Anderson all making Friday’s finals.