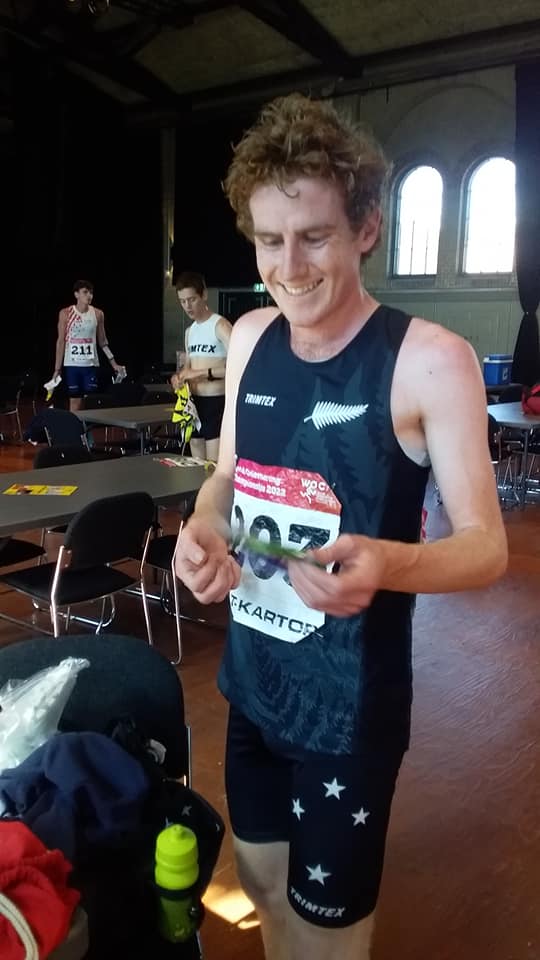 A long day with many ups and downs ended with Tim, having led for much of the race, taking 4th place in the Men’s KO Final as Matthias Kyburz became the first ever World KO Sprint Champion. In a final which, like both the quarter-finals and semi-finals, had no forking, Tim had the courage to take significantly different route choices on several of the legs compared to most of the field. It was the long leg back from 9 to 10 that ultimately made the difference as Tim took a route to the right while Kyburz chose the left option and took a lead that he did not relinquish. The two Swedes August Mollen and Jonaton Gustafsson, who took silver and bronze, also snuck past Tim.

Earlier in the day had been a series of ups and downs for the NZL team. The qualification race started brilliantly with Joseph, with the first start time, setting a time in Heat C which, ultimately, only Kyburz was able to better. Although Gene and Tommy had problems which saw them both outside the cut-off of 12 qualifiers, it was Tim who had us with near heart failure as he also made mistakes and crept into the KO rounds as last qualifier in Heat B, by only 1 second!

The women’s qualification started after the men and Imogene and Lizzie, testing her Covid recovery, were well off the pace. Penelope, like some of the men, made early mistakes which left her teetering on the brink in 12th place. Heart-breakingley, the last finisher in Heat A pushed her into 13th place, missing the KO rounds by 1 second.

The heat selection by the qualifiers was an event in itself, with different coloured balls representing the position they had finished in, and each athlete in turn adding his/her ball to a pile representing the heat they elected for the quarter-final. As it was already known that, for example, the first 3 in QF1 and QF2 would go into the same semi-final, this led to some very tactical choices as athletes tried to work out whom they would have the best chance against.

The quarter-finals started with Joseph’s and it turned out to be the the second fastest of the six. Sadly, Joseph was out of the money finishing 5th in a time which, in fact, was the 11th fastest of all the quarter-final runners, faster, for example, than all the athletes in QF2, 3, 4 and 6! Tim’s quarter also involved Australia’s Aston Key and produced an epic finish in which the first 4 were all initially credited as equal 1st, only to be then separated by finish line photo, Aston finishing 2nd and Tim 3rd. Tim’s day of drama continued in the semi-final where he was again involved in a photo-finish as he, Mollen and Britain’s Ralph Street all crossed the line together. This time Tim had the crucial 2nd place putting him into the final round.

I’ve no doubt there will be, after a time of reflection, some considerable discussion on the merits of this first WOC KO Sprint and whether it really does fit into orienteering – no forking, a lot of pack running, and, in some cases, evidence of minimal map-reading (not by team NZL I hasten to add). This is offset by the undoubted excitement and spectator appeal.

By the way, the women’s title went to……Tove Alexandersson!

Now we all need a day’s rest before it all starts again with the individual sprint on Thursday.