In a tough WOC middle distance final both Lizzie Ingham and Tim Robertson had problems, ending up in similar places (38th and 39th respectively) about 10 minutes behind the winners. After a small waver on control 2, Lizzie came unstuck on control 11 where she drifted left and took some time to correct. Thereafter it was a matter of running to finish rather than for a hoped for top 20 place. 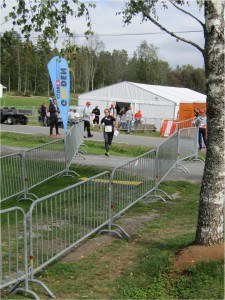 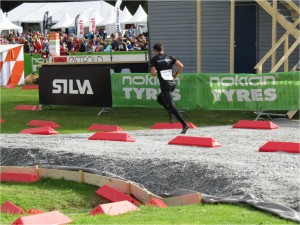 Tim on the run through

Tim started well but his race faltered when he badly overshot control 4, bouncing off the rocky hilltop beyond, and subsequently hindered further when he smashed his leg on a rock just before the arena passage. The best Australasian result came from Simon Uppill who finished an impressive 30th. 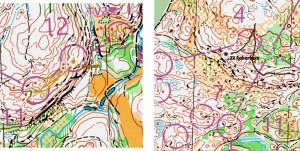 Lizzie meanders between 11 and 12, Tim overshoots 4 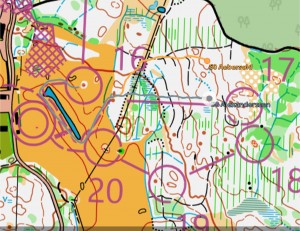 The women’s race was a very close finish between the gold and silver medallists from the long distance with Tove Alexandersson literally throwing herself across the line to beat Simona Aebersold by 5 seconds. Simona led by 3 seconds at the arena run-through but then took a much wider route to control 17 while Tove went straight, making up the time difference and giving herself just enough margin as she tightened up in the finish chute. The next 5 runners were covered by a mere 7 seconds with the bronze medal shared by 2018 champion Natalia Gemperle of Russia and Venla Harju of Finland. The men’s race also saw a second gold medal as Olav Lundanes added the middle crown to Wednesday’s long distance win. Olav’s margin over Gustav Bergman was 11 seconds. There was a further 18 seconds bak to Magne Daehli who, having won several relay medals, finally took his first individual one. 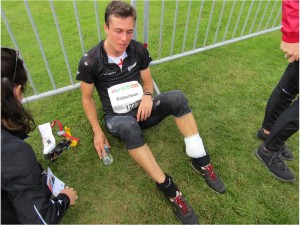 Tim, ice pack on his leg

The first forest only WOC of the new system finishes tomorrow with the relays. The women run first with Lizzie on the first leg for NZL followed by Kate and Greta. Sore leg permitting, Tim opens for the men handing over to Gene and then Toby on the final leg.