After really promising starts in both the women’s and men’s relays team NZL faded to finish 21st and 19th respectively on a day when nearly 24 hours of rain, varying from near torrential to torrential, turned the Mork arena into a quagmire. The overcast skies and the late start (6.30 pm for the men) set to satisfy television requirements, even saw at least one runner head into the forest with a head torch!

In the women’s race Lizzie ran a strong first leg, admitting to nothing significant in mistakes, to come in 14th at the change over to Kate. After the first short loop to the arena passage that position had slipped to 17th and at as Greta took over for the third leg NZL were in 19th. However, after a good start there were significant problems for Greta at controls 7 and 8 and the NZL position dropped to 21st at the finish. At the first changeover Sweden had held a handy lead over Switzerland and Russia of 44 seconds, with hosts Norway another 20 or so seconds further back. On leg 2, however, Simona Aeborsold, silver medallist in both the long and middle, reigned in double world champion Tove Alexandersson to give Switzerland a 6 second lead over the Swedes. By the arena passage on leg 3 Karolin Ohlsson and Julia Jakob were together and there they stayed right up until the final control when Ohlsson powered away to give Sweden victory by 4 seconds. Behind these two Natalia Gemperle, starting the leg in 5th behind Norway and the Czech Republic, had hauled these two teams in and was in a battle for the bronze with Norway in the form of Anne Margarethe Hausken Nordberg. Again there was  sprint finish with the Russian taking the line with a margin of 6 seconds. 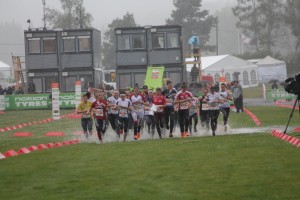 The women’s mass start splash through the rain. Lizzie on the right just behind the front line. 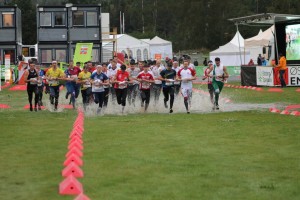 2 hours later the men have their chance. Tim running wide on the left.

In the men’s race Tim gave NZL a fabulous start when, in a densely packed front of the field, he came in 10th only 12 seconds behind the leaders Finland. Gene on leg 2, still feeling the effort from the long, maintained that position through the arena passage but then had trouble on the vague hill tops at 6, 12 and 13 dropping to 2st as he handed over to Toby. Meanwhile, after a superb run from Henry McNulty, who came in joint first at the first changeover, Simon Uppill still had Australia in 11th place. On the final, somewhat longer, leg Toby had another good run to follow his long distance performance shedding time only at 15, where he dropped beneath the control on the steep hillside, but still picking up 2 places overall to finish 19th. Just as in the women’s race there was drama at the front of the field. After the tight first leg, double gold medallist Olav Lundanes opened up a lead of 39 seconds for Norway over Finland with Austria and Sweden in 3rd and 4th. Norway seemed destined for their 4th consecutive relay gold until Magne Daehli on leg 3 had trouble at the same control 6 as Gene had suffered at, veering north to the wrong hill top and dragging Finland with him. Gustav Bergman made no such mistake and was suddenly clear of the field and taking Sweden to the first relay gold in 5 years. To the dismay of the Norwegian crowd (significantly smaller than on previous days due to the weather) another mistake by Magne a few controls later and Finland and France were in a fight for silver and bronze, with the Finns taking 2nd. Australia were an excellent 15th.

So another year, another WOC is over, the first of the shortened form. Time to digest, analyse and plan for the first sprint WOC in 2020.