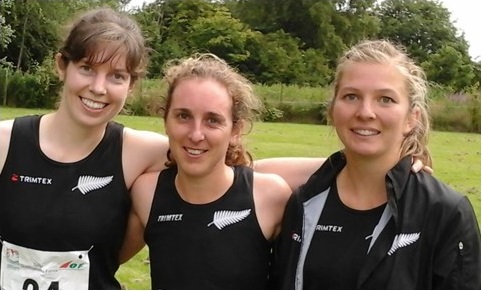 After all the build-up WOC is finally underway and today was almost, but not quite, a dream start for Team NZL – all 3 women (Lizzie, Laura and Imogene) qualifying for the sprint final, Tim also cruising in, and Gene and Shamus coming agonizingly close to joining him –  missing out by only 16 and 8 seconds respectively. The fast and flat courses, very different for each of the three heats, started, as expected, in a complex housing estate where the slightly longer but safer routes were often the best, then had a long leg with a significant route choice before doubling back to finish with a series of close controls in the grounds of Pilmuir school.

Lizzie and Laura starred, both finishing 4th in their heats only seconds behind Minna Kauppi and Tove Alexandersson respectively. Their reward will be start times at the fast end of the field where the medals will likely be decided. Imogene, who had the early start of the three admitted to taking the more easterly and longer route choice on the long leg, dropping time which gave her a very nervous wait before securing the last qualifying spot in Heat 1 by a mere 1 second! Amazingly, although little old NZ had all three women qualify for the final, none of Sweden, Norway and Finland can claim the same!

Tim had the very last start and was well up at the first split before dropping a little over the middle part of the course, and, as he crossed the line, looking around worryingly for confirmation that he had qualified. Both Shamus and Gene had good runs and felt satisfied with their performances. Their non-qualification is a reflection of the enormous international strength of the men’s field.

As for our cousins across the ditch, there were no men’s qualifiers, but ex-WOC sprint champion Hanny Allston was a strong 5 th in Imogene’s heat, and Rachel Effeney emulated Imogene by squeaking into the final qualifying spot in heat 3.

Before the sprint final comes the sprint relay, late Saturday afternoon here, and if Lizzie, Laura, Tim and Gene can repeat then perhaps a nearly dream day can be followed by another.