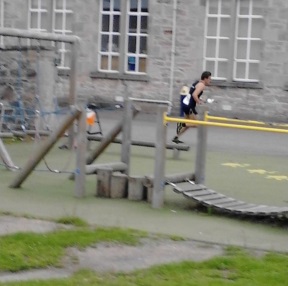 After the highs of the sprint qualifying and sprint relay the only bright spot of the sprint final was Tim’s excellent 20th place in the men’s race. The three women all had difficulties of different kinds. Laura started very strongly and was well up at the half-way point but suffered from stitch and dropped rapidly down the field to finish 40th, looking to be in considerable stress as she crossed the finish line. Lizzie, philosophically, declared that it simply wasn’t her day as she dropped time early and then had to backtrack when a control did not register. Still running strongly she came in 32nd. Imogene, with the first start, had the pressure of being first through the arena run through in her first WOC final, and was greeted by wild applause. Possibly losing concentration she then proceeded to miss control 19 and mis-punched.

Tim’s race was steady and he oscillated up and down the field as small route choice differences caused fluctuations in the field, but showed a strong finish to produce NZL’s best men’s sprint result since Ross Morrison made the top 20 four years ago in France.

Interestingly, all the NZL runners made the same comment – that the final k after the arena run through was pretty well pure cross-country, emphasising that the type of athlete needed for this event is a dedicated sprinter. It is also true that the tough programme of three sprints in three days took its toll. This, and more, may be OK for the likes of Sprint the Bay, but at this level it is really tough and a reflection of this is that many teams had different sprinters in the individual and the sprint relay. Post-WOC we need to do an analysis of this and see if, to improve our chances, we need to find ways of doing the same.

Who won? Well two of the women’s favourites Tove Alexandersson and Judith Wyder did not start, leaving the way clear for Denmark’s Maja Alm, who was hugely impressive in yeterday’s sprint relay, to take the victory by nearly 40s – a huge margin at this level. The strength of the eastern countries was shown again with Ukrainian and Russian athletes taking the minor placings. Sweden dominated the men’s race taking gold and bronze through Jonas Leandersson and Jerker Lysell, while after their disappointment in missing out on the relay medals Martin Hubmann gave Switzerland the silver. Pre-race favourite Yannick Michiels of Belgium, who finished 5th, probably missed out on a medal when he tripped crossing a low fence as he approached the arena.