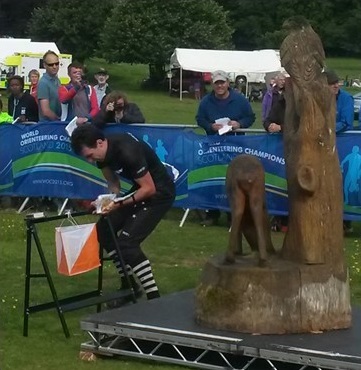 Today’s middle distance has brought it all for team NZL – world class runs by Lizzie and Matt, solid performances from Laura and Renee, but an injury to Tim which cast a bit of a damper on an otherwise good day. Particularly pleasing was that on courses at Darnaway, venue for WOC in 1976, which were both technically and physically demanding, while many of the top runners made costly mistakes, none of the Kiwis made big errors. Starting in highly technical and generally lower visibility forest through the first half, both men’s and women’s courses then went into a rough open area which really had the only virtue of giving good camera shots for the TV, before entering faster beech forest and finishing in the shadow of Darnaway Castle.

Renee, in her first WOC race, and with a relatively early start had a few wobbles but came home respectably in 55th place. Laura, perhaps a little tentative after her problems in the sprint final, had a steady race finishing in the same place (40th) as in the sprint, but after a much more satisfying experience. Lizzie, who’s one error at the first control cost her perhaps a minute, probably expressed the growing strength of the women’s field when she commented that she felt that 4 years ago in France a run such as she had today would have made the top 10 (she finished 19th). 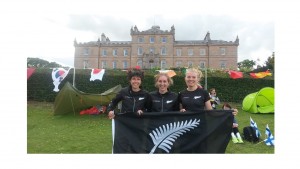 Although Lizzie’s run (her 8th top 20 at WOC) was great, the stand-out performance was undoubtedly from Matt. Having almost a clean run he figured prominently in the commentary, coming in from a mid-field start time in 2nd place, gradually slipping to 26th but only marginally more than 3 minutes off the pace – one of NZL’s best ever performances in the men’s middle or long distance races. Tim, having started just 4.5 minutes earlier than Matt was also going well when he fell and, for the third time this year, dislocated his shoulder, having to be retrieved by ambulance and taken to Elgin Hospital. 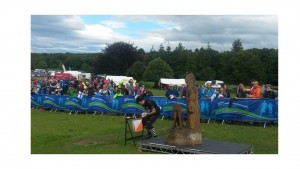 At the front of the women’s field Annika Billstam of Sweden retained the title she won in Italy last year, with a 50 s margin over Merja Ratanen of Finland with Emma Johansson (Sweden), who led for much of the day, taking bronze. Daniel Hubmann of Switzerland won his first middle gold medal, to add to previous spring, long and relay golds, while Lucas Basset of France took silver, with Olle Bostrom of Sweden 3rd. The first seven men were covered by only 46 seconds.

Tim’s injury means that we have had to rethink the men’s relay team for tomorrow, and Gene will now lead off with Shamus to hand over to Matt on the final leg. For the women the order will go Lizzie-Renee-Laura. Todays’ performances mean that unless disaster strikes not only will the women be safe in Group 2 for 2016, but the men now have a chance at promotion and gaining that extra place in the middle and long for Sweden. Now isn’t that last sentence the kiss of death?