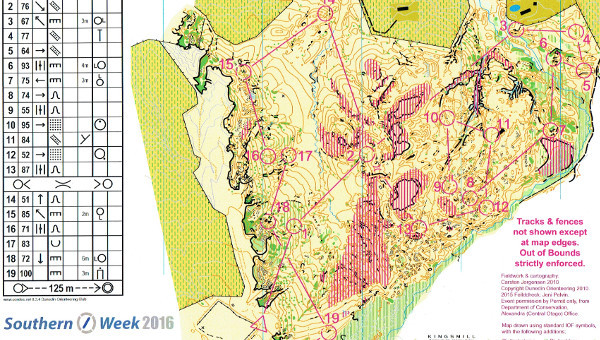 Tane Cambridge has posted on his personal blog about orienteering:

“This has been a long time coming but finally, and since I’m currently otherwise incapacitated, I thought it was about time for a recap just over 3 months later….

Back in the midsummer this year and just before Coast to Coast I had a pretty bad kayaking trip down the Waimak gorge. I really wanted to get back up and do it straight away but a week of orienteering beckoned around my original hometown of Wanaka! So the car was loaded up with orienteering gear, camping gear, then a whole lot of adventuring gear, and of course a Kayak as that is what I really needed to practice.  Gear loaded it was time to pick up my travelling companions, Georgia (in full on Godzone training mode) and Lizzie ( Pro NZ orienteer, on her summer holiday/escape scandi winter mission).  Some serious questions of our orienteering intentions were asked by Lizzie as we left Christchurch with a fully laden car of gear, bikes on the back and a kayak on the roof! while she was left wondering what she had herself in for…”