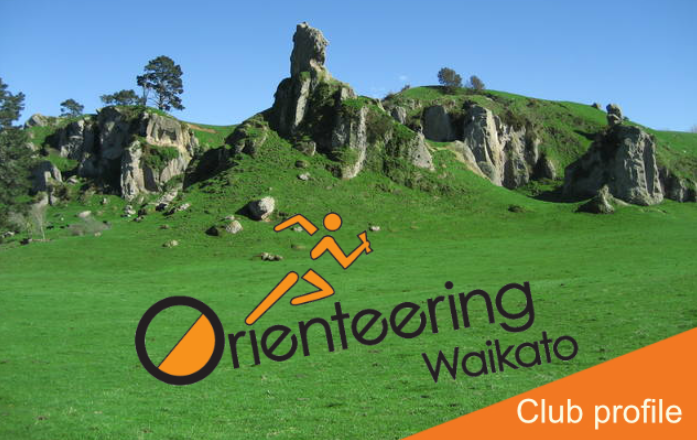 Waikato Orienteering club began life as the Hamilton Orienteering club in July 1975. Within a year it had built up a membership of 51. With help from the NZ Orienteering Federation and the (now defunct) Pinelands club, the club was able to acquire equipment to run events.

The presidents report of 1976 noted: ‘This equipment includes; a tent, chairs and a table, 25 controls and clippers, a clock, 27 compasses, and a stock of clip cards. This equipment is costing $35 which is to be be paid off over three years”.

An anecdote written in 1986: “early members have vivid memories of black and white maps with contour lines crossing each other or coming to a stop somewhere on the map: of having whole events held in an area that would be all ‘fight’ by today’s standards..”

Membership eventually increased to 200 and many club members gave their time to create maps and organise events.

An early project (1979) was the modification of a caravan to act as a headquarters during club events and to store equipment. That  same caravan is still in use in 43 years later!

The club has waxed and waned during its 47 years of existence. During the 1980s and early 1990s the club was likely one of the strongest clubs in the country. This seemed to peak in 1994 when the club hosted the NZ Champs at Glenora (Wharepapa Sth) & Kawhia Forest. By the late 2010s the club had dwindled and reached its lowest point in 2010 when a few key members left town suddenly causing the club to go into recess for 18 months.The arrival of some ‘new blood’ in 2011 restarted the club and things have been improving ever since. The club now hosts 26 events each year and hit a high of 175 members in (pre Covid) 2020. Attendance at events has slowly increased so that we now get 40-80 participants at most events.

Surely this is Kapamahunga! Used for the Australia/NZ Challenge in 1987 and only mentioned with hushed tones and fear by Australians ever since. Long since abandoned by the club this map contained a large chunk of steep native bush. Many competitors (including Aus/NZ team members) were on the course for over 2 hours with one poor M17 taking 267minutes!

The rocky farmland of Wharepapa South has been a mainstay for the club and has hosted many major events since first used in 1994.

Popular in the 1990’s was Kawhia Forest. Many competitors would stay in the marae and it created a communal event atmosphere.

Bill Teahan: Committee member for many years. Mapper of many epic club maps in the Waikato.

Who are our members?

The club has only a few ‘life-long’ Orienteers and also few that travel to other regions for competition. This means that club has needed to focus on establishing a programme of events that is local and in terrain that is not overly technical. Adventure racing has delivered a huge boost in club members and participation, in fact our biggest target market seems to be adventure racing ladies!

These ladies are often less interested in the competitive element of Orienteering racing but prefer the challenge of participating in a navigational challenge with their friends.

The club pioneered the use of MapRun in NZ and now uses it for all 18 of our urban events (10 x Rogaine and 8 x Orienteering). This does not offer quite the same competitors’ experience as Sport ident, but is an organisers’ dream and significantly reduces the effort required to hold events.

Rugged Rogaines
The club committee had a strategy workshop in 2019 kindly led by Pete Swanson (ONZ President). We worked through a SWOT (Strengths, Weaknesses, Opportunities, Threats) analysis and thought hard about why our club existed. One of our strengths is that our central location gives us access to a large chunk of the North Island. One of our weaknesses was that very little LiDAR data existed in the region (this will be remedied in 2023). We believed many of our members were motivated by the concept of attending an ‘event’ which was likely to be a longer physical challenge than our normal events.

Orienteering events
We decided to put our efforts into Rogaines and in 2020 launched the Rugged Rogaine series with a longer (4 hr) and shorter (2hr) option. This has been an instant success with participation being double our normal club attendance and passing 200 at an event in 2021. It seems that the 4 hour option is long enough to appeal to many from other regions, while the 2 hour option is long enough for many locals. Participants have told us we do not charge enough for the events so we have bumped up the price a bit. These events seem to provide us a revenue stream to help grow the club.

What is the future?
Waikato is one of the regions currently acquiring LiDAR data following funding from central government. Until this is available, it has been difficult for the club to acquire photogrammetry and therefore create new Orienteering maps. So the club has held off creating new Orienteering maps for the last few years and has had to ‘make do’ with a small set of existing maps. This will soon change and it will be exciting to start competing on some new areas.