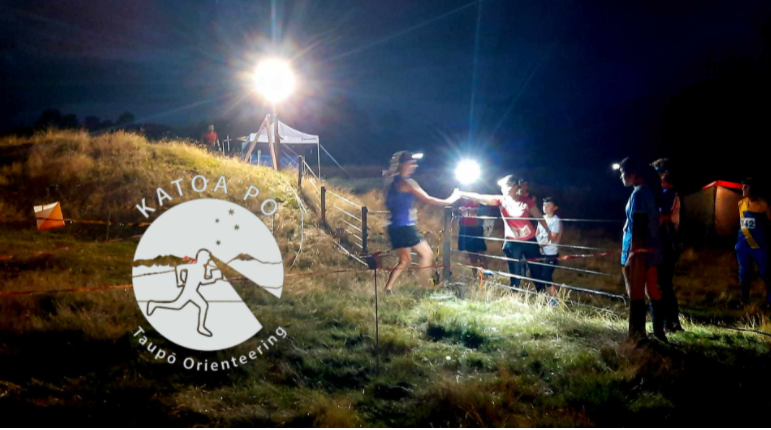 A night nav relay race for all ages

Katoa Po is one of New Zealand’s longest running orienteering events. Started in 1981, it’s seen teams from all of New Zealand do battle over Taupō’s unique volcanic terrains in the thick of night. One of the highlights of the event is the age restrictions placed on different legs of the relay. This means that teams encompass all ages – from 6 to 90, and all abilities.

Katoa Po is first and foremost a night orienteering event. Night orienteering is quite different to daylight orienteering – your headlamp still lights up the world around you, but you can only see with ‘tunnel vision’. The trick is to look around and ahead more than you might normally in orienteering, and be very deliberate about your technique. This is particularly important in Taupō terrain which features a lot of ‘negative terrain’ – with gullies incised into the landscape. At night, it’s hard to see these gullies in the distance, and so you must use other techniques and look further afield for other features on the map.

This year’s premiere 7 person competition saw defending champions Taranaki face off against strong teams from AOC and NWOC. Taranaki with strong runners across the board were the favourites, and didn’t disappoint with strong performances across all legs to take the win.

The battle for second between AOC & NWOC was much closer. NWOC took an early lead with the Harris brothers running excellent first legs. An excellent run from Sam Carryer on leg 3 saw AOC overtake NWOC, who opted to have an injured Cameron de L’Isle walk the leg. NWOC & AOC then switched places several times across the next few legs before a fired up Gene Beveridge ran down Jonty Oram on leg 7, setting up a narrow win for NWOC in the battle of the Auckland teams.

The depth of AOC at the moment is impressive, and saw the club’s 5 person team take a strong victory yet again in the 5 person competition. Overall a great weekend, and despite some COVID restrictions, another successful Katoa Po.
By Cameron de L’Isle