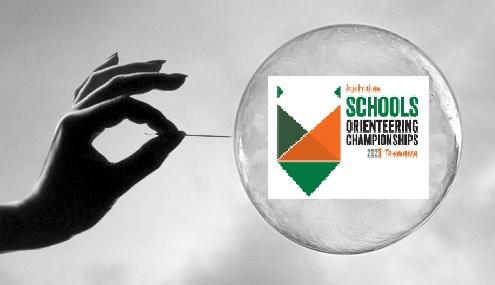 On Thursday 22nd July ONZ’s Council met to discuss (among other things), the fate of the Southern Cross Challenge – an annual challenge takes place at the Australian School Orienteering Championships.

Prior to the meeting a lot of work had been put into investigating and planning for a number of covid-related challenges; immunisation (not a possibility for trips to OZ); Covid testing options that meet NZ standards; Orienteering Australia’s (OA) contingency policies for running the event; conditions under which we could receive refunds for travel, accommodation, airfares…Needless to say Orienteering Australia were keen to go ahead because the event is being held in Tasmania, a state with no covid cases.

At the meeting the decision was made to go back to team managers and coaches and participants/families to see if they still wished to attend given the risk and significant financial investment for families involved. A number of these families had already made the decision that for financial reasons, their children would only be attend the Southern Cross Challenge and would forego the New Zealand Secondary School Championships (NZSS) in Hawkes Bay.

At 1pm the following day during the first day of the New Zealand Secondary School Championships, the announcement was made that the travel bubble would close and would remain so until the day after the Southern Cross Team would be flying to Tasmania. Unsurprisingly, ONZ made the decision overnight to cancel the trip.

At the NZSS Champs, discussions about offering an alternative experience for competitors begun as this was now the second year in a row that the Southern Cross Challenge could not take place.

With a lot of support between ONZ staff, club representatives, and many team coaches, it was decided that a Southern Cross experience (similar to the recent JWOC experience) would be desirable.

Initial discussions identified a couple of obvious options for hosting – the greater Wellington area or Auckland.  There were pros and cons for both places.  If hosted in Wellington, there was a strong likelihood that the event could be made to coincide with the Pokapū (Central) Regional Championships and it also had the benefit of being the location where three of the four managers and coaches were located.  Auckland, on the other hand, had the benefit of being home to the majority of team members.  It was felt that both locations were able to provide maps similar to those that were being offered in Tasmania.

We are now a week on and discussions are currently underway as ONZ works with clubs to secure maps, landowner permission, staffing, as well as scheduling challenges like potential clashes with the Hillary Challenge.  The goal is to host the event in the October school holidays.  While discussions behind the scenes are progressing, it is hoped that a final decision about offering a Southern Cross Experience could be made by the second week of August.