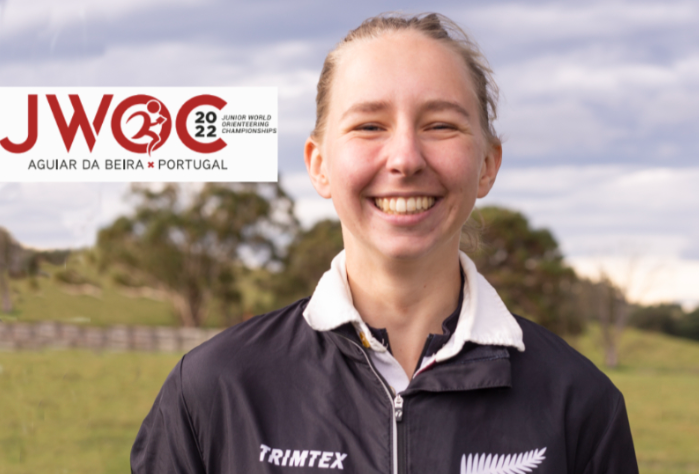 What did you enjoy the most when you were at JWOC? What is your most memorable map?
-I really enjoyed the team atmosphere within the NZ team, the memories I have with everyone are fantastic. The most memorable map would have to be the green maze of death in Hungary for the middle final. I had just scraped into the B final the day before but managed to end up 10th in the B final.

What are your personal coaching goals that you would you like to accomplish with the team this year?
-I would love everyone to get everyone immersed in the Portuguese maps before they go, so we are doing a lot of exercises where you have to analyse a course on one of the training maps in Portugal after doing a sprint interval for example. I’d also like to get that team atmosphere going now before everyone arrives in Europe, so we have weekly team zooms where we can go over maps, the bulletin, trainings and general hype.

What do you want the JWOC team to install in their minds as they prepare to go overseas to compete?
-JWOC is a big step up from NZ and Aussie competitions, so it can be hard to know where you stand against everyone else competing, and even for those who have been before because there has been a 2 year gap. So I want everyone to measure their success on a personal level, such as aiming to have a clean race with no mistakes, or to feel physically strong throughout the entire race, or to nail their navigation faster than they have before. The number next to your name on the results board is just a bonus!

The terrain could be quite Australian in style with rocks, dryness and heat. What do you think could be the most challenging part as New Zealanders?
-The terrain looks quite detailed in areas with lots of rocks mixed into forests and patches of bare rock, which we haven’t been on since 2016 Aussie Champs I think. The most challenging part will be getting the hang of how things are mapped, and which features are best to navigate with during the training week, which is like a 5 day crash course in Portuguese forest and towns. If the team can manage that, then it’s just the same as running on a new NZ map.

What are three actions you think the team can do individually every week to help them prepare? How are you helping the team in the lead-up?
-They can get out orienteering at least once a week, even if it’s not on the highest quality map. Reread the bulletin every week, and pray to their orienteering hero shrine (ours is a life-sized Theirry Gueorgiou poster in the garage)

What do you want the JWOC team to come away with after competing in Portugal this year?
Some great memories of their own, some important international racing experience, and the satisfaction of having finished the JWOC week in one piece. Those who have more years at JWOC will have the basis for higher goals at next years JWOC, and those who are moving into the senior grade will hopefully have the fire lit for success on the bigger stages like WOC, World Unis, and World Cups.

Is there anything the rest of us can do to support them from afar?
It’s great to see some athletes already getting support from their clubs. The trip over is always quite expensive so anything given to them will help. Otherwise just cheer them on from your bed at midnight, watch the GPS tracking, and let them know they have the fans back home!