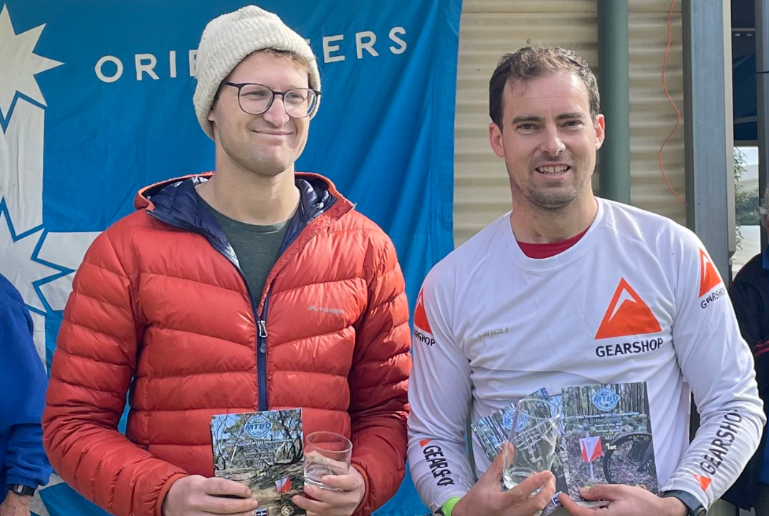 The Victorian champs weekend started on Saturday 14 May 2022 in the morning with the Middle Distance on the Nerrina map on the eastern outskirts of Ballarat. The middle distance event run on Saturday morning utilised the extremely complex single track network east of the Little Bendigo Primary School (the central assembly venue for all three events), which caused many headaches over which was the correct track to follow.  Courses ventured further north where route choice in a less complex area became the deciding factor on gaining or losing time, before course setter John Gavens sent riders back into the spaghetti mess just prior to the finish. Conditions on the morning were wet and muddy with rain dominating proceedings but most riders persisted and finished their course, albeit in longer than planned winning times.Results from Saturday 14 May 2022 – 1st James Robertson, 2nd Harrison Waugh, 3rd Martin – the first four riders within 4 minutes.

The Victorian champs Sprint distance race was almost all south of the freeway (other than the finish), venturing into urban stress, parks and small bushland pockets including a reserve, and on a site of the former reef mining company. This area featured a few hills, erosion gullies and swampy areas but mostly fast riding with clever route choices. Course setter Kathy Liley made good use of the area with quick route choice and decision making required but with a chance to test the legs on longer riding sections. The weather for the afternoon event had long since cleared up and riders were treated to perfect conditions with only the occasional puddle to avoid.

The Long distance race was held on the Sunday 15 May morning. The event was further out in the complex area east of the school although quickly progressed further north towards the Creswick bushland where bigger route choice decisions amongst less complex track networks were required. Conditions further north were drier than the previous day’s middle event and allowed for faster riding whilst focussing on clean navigation and route choice. Gary Buchan was a first-time course setter and provided riders with interesting challenges with the occasional detour into fun sections of single track. In the Long Distance Championships Martin led, catching James Robertson early on and battling together for most of the course, but not able to make a break. Ricky Thackeray again proved solid competition, although riding unofficially as the mapper.

All the maps were freshly updated and re-mapped to a high standard by Ricky Thackeray, as they hadn’t been used for a major MTBO event in over a decade and required extensive revisions. The new MTBO map specifications featured off-track rideable areas mapped with dark orange and speckled black dots. The weather was not your usual Aussie burning sunshine, but cold with cloudy skies, and rain on and off leading to some slick clay tracks.

At the event many of the Aussies have been asking when our NZ MTBO champs will be on as they are itching to come over. Next year’s championship is already being planned with a likely location centred around Castlemaine.

In July Martin heads to the Czech Republic for the 5-day Orient Express then onto Sweden for the World Champs where he will meet up with the Australian Team. O-Ringen will be included before he heads to Canada on the way home back to NZ.