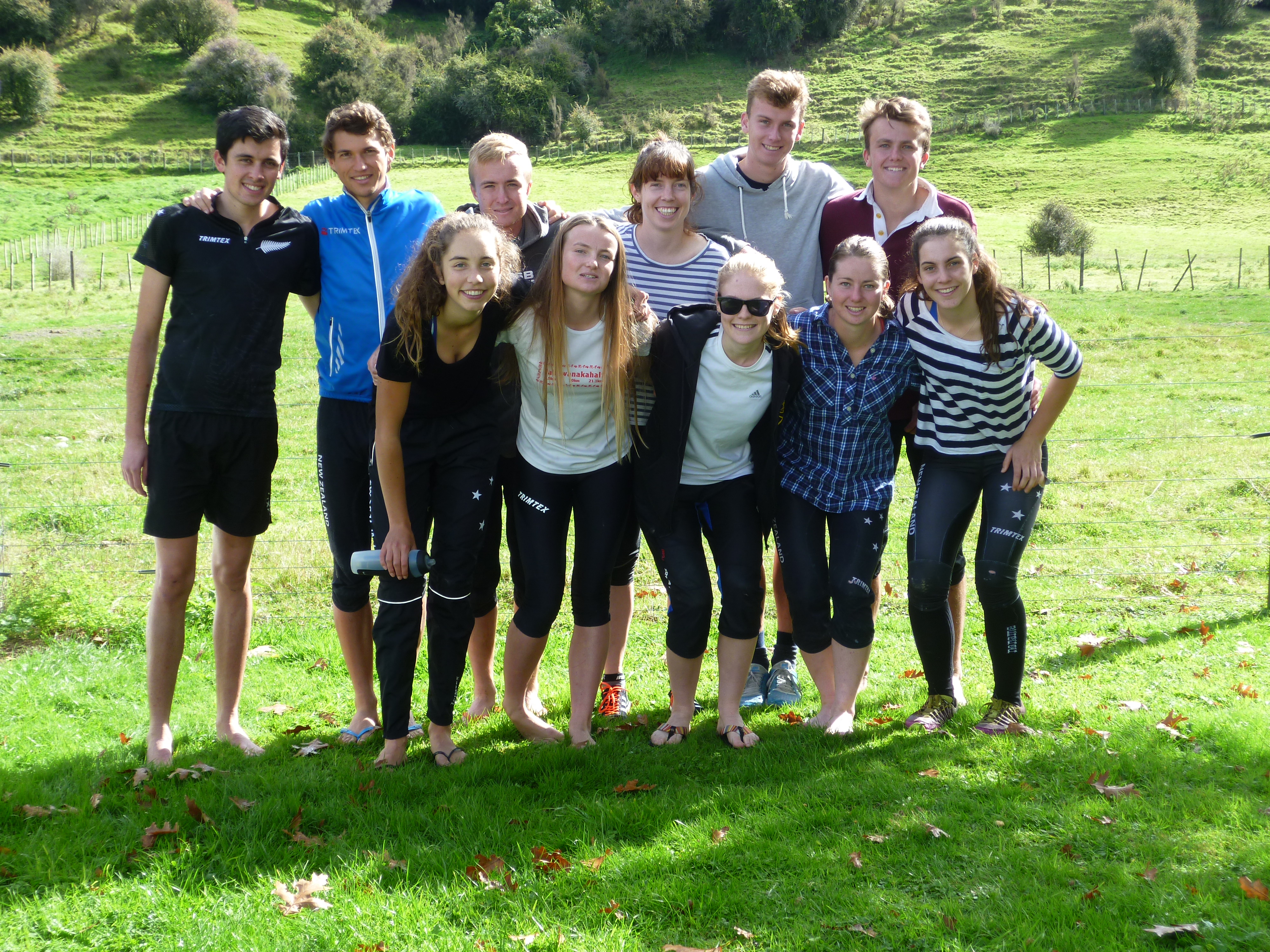 With the ONZ Champs, as the final selection event, out of the way the selectors have been busy in analysing performances and finalising the teams for WOC and JWOC. These are highlighted below. April has also seen the first High Performance Squad camp under the new National Squad structure. This was held in Wellington/Masterton and, with 8 JWOC and 2 WOC team members among the attendees, has hopefully given a boost to the preparation for the major international events of the year. The camp was followed by the third round of the SuperSeries over Anzac Weekend. This included what was, I believe, the first sprint relay to be held in New Zealand. A report on this, and a full SuperSeries update, is included below.

We now switch our attention to the first 2 rounds of the IOF World Cup for 2016 which take place in Wroclaw, Poland (30 April – 2 May) and Jesenik, Czech Republic (21-28 May) at both of which NZL has a healthy representation.

Congratulations to all the following, who have been selected for WOC, for JWOC, and for WUOC (World University OC).

One extra point about the naming of the WOC and JWOC teams is that selection is one of the criteria for membership of the National Squads. Therefore we welcome Jula McMillan, Kate Morrison and Toby Scott into the National Senior squad, and Cameron de L’Isle into the Under-23 Squad.

The first HP camp with the new squad structure started in Wellington on Saturday 16 April with a series of sprint exercises on 3 different sprint maps. These covered racing intervals (done in pairs), individual sprint intervals, and a concentration on route choice. On the Sunday we started by taking in the Wellington club event at Missing Link – steep but clean pine forest – where there were some impressive times by Gene Beveridge, Cameron Tier and Ed Cory-Wright on a rugged middle distance course. The camp then decamped to Masterton for the rest of the week, taking a variety of different areas.

Monday was planned by Gene on the Hapua map (used for JWOC trails last year) and started with a window exercise designed to test accurate compass work, before moving into a line course requiring frequent updates of direction between distinct features, and a final session incorporating blanked out areas of the map. 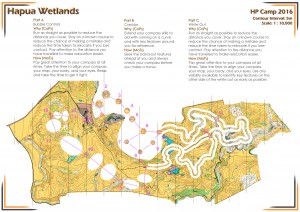 Faced with much trepidation by some, Tuesday started with a 300 m time trial on the track, yielding base times for the participants so that they can judge their improvements as they approach the major events throughout the next several months. After brief recovery it was out to Riverside for a route choice exploration of the hills, a rapid control picking through the subtle river terraces, and a contour only map through both. Not satisfied with this, it was on to Rathkeale for a sprint maze exercise, designed to promote reading ahead and rapid map reorientation, and a trial sprint relay.

Wednesday took us out to the forest at Ngatawhai – more windows, but then a mass start relay exercise and a standard middle distance across, down and up the slopes. We then moved south to the southern part of Te Wharau forest where we had our only mishap of the week, discovering that in the intervening weeks between an early visit to the area and the camp, logging had removed about a third of the forest we had planned to use! This made for an interesting hour and a bit!

For the final day we went north to Ruamahanga, possibly the last time that Jim and Barbara Barr’s place may host orienteering as they have it on the market. Exercises here
concentrated on verbalization, both by self while running legs in pairs, and then by the 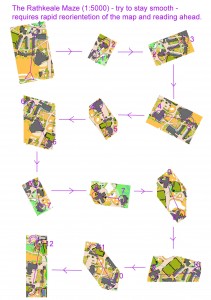 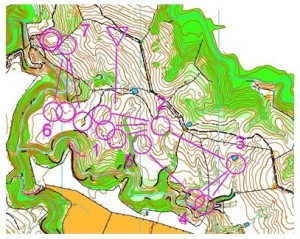 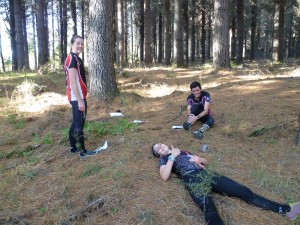 following runner (the one with the map) giving navigational instructions to the runner in front (without a map).

Evening sessions at Mawley Park Motor Camp included development of training programmes and nutrition, while the HP leader took the opportunity to also have one-on-one talks with participants. 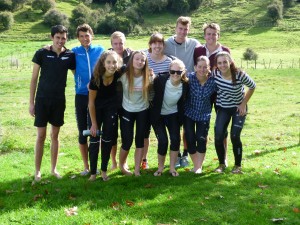 Organizing such a camp is not easy and BIG thanks are due to Gene Beveridge and Nick Hann for helping with planning exercises, Sarah O’Sullivan for taking charge of organizing the copious amounts of food, and both Sarah and Anna Robertson for their help, particularly on the two days when I had to be in Wellington. Greg Thurlow, Magnus Bengtsson and Tessa Ramsden also helped with various aspects of organization.

Coming as it did at the end of the National Squad camp, round 3 of the SuperSeries over Anzac Weekend offered something a little different, in particular a strong focus on racing  – not only a sprint relay, but also a chasing start in the double middle distance, and also a mass start race with butterfly loops.

Despite Red Kiwis having to change maps and completely re-plan courses at short notice the sprint relay went off without a hitch. An entry of 16 men and 13 women in the elite grades, plus the promotion of 3 women from the W21A grade gave us 8 teams on the start line – 3 from Northern, 2 from Central, 1 from Southern and 2 combined teams. With many of the athletes having been on the week long training camp, it was probably not a surprise that the winning team (Northern 1) was made up of 4 (Dani Goodall, Matt Ogden, Tommy Hayes and Jula McMillan), who for one reason or another, had not attended! Nevertheless it was a very impressive wire to wire win ahead of Northern 2 in second place and Central 1 in 3rd. Given that this was the first such relay in New Zealand results in full were as follows.

Thanks are due to Red Kiwis and, particularly given the venue problems, to Joy Vanderpoel for managing to put the race together.

The first race in Sunday’s double middle distance saw Carsten Jorgensen, Penny Kane and Kayla Fairbairn take relatively clear leads into the afternoon chasing start. While neither Penny (in W21E) nor Kayla (W20) were able to produce the fastest times in the afternoon, their leads proved sufficient for them to comfortably retain first place overall. In M21E, however, Nick Hann, starting some 90s back, caught Carsten and despite an error on the penultimate control was able to pull away for a 7 second victory.

The mass start race on Fusilier on Monday had both the men’s and women’s fields running courses with 3 butterfly loops. This allowed for 6 possible variations in the order of loops, meaning that no more than 3 people had the same variation. As luck would have it, in the women’s race both Dani Goodall and Sonia Hollands drew the same 7.4 km variation and, despite different route choices, were rarely more than 10 seconds apart throughout. Whether the head-to-head nature of their battle made the difference or not is unclear, but at the finish they had a clear 2 and a half minute margin over Penny Kane, with Sonia taking victory over Dani by 9 seconds. 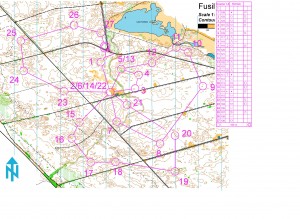 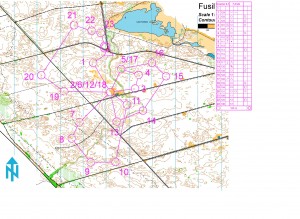 In contrast, in M21E/M20 there was a clear win for Gene Beveridge who covered the 10.0 km in a very impressive 50-10 for a near 2 minute margin over Nick Hann. Carsten again proved his durability in 3rd place behind Nick.

After 3 rounds it is becoming much clearer who the main contenders for the the 2016 SuperSeries will be. With 3 individual events (at Queen’s Birthday) to go the leading positions are as follows.

With the best 7 events to count and a high premium on victory although Nick is in the box seat in Senior Men, both Gene, Carsten and Matt are all within striking distance with good runs at QB. In Senior Women, barring disasters Penny looks reasonably safe as the structure of the queen’s Birthday events means that Dani Goodall is unlikely to compete in W21E. Dani’s lead in W20 is healthy, but not insurmountable with good runs from either Kayla or Alice. Obviously, the closest competition is between Tommy and Matt in M20, although Ed cannot be ruled out.

The calculation of the teams scores in the last newsletter was actually erroneous, not taking into account the best 5 results in each race in each round. This is now corrected below and, as can be seen, Northern have a 300 point lead over the South Islanders, which will be difficult, but not impossible to overcome. Much of this came from the Anzac Weekend sprint relay where Southern suffered from having only 1 team. Central have relied heavily on the point scoring ability of their women (thanks Penny, Tessa and Lara) and lag behind, again, largely because of relatively poor results in Round 2 at the Nationals.

A plea – come on teams let’s rejuvenate the team names. Southerly Storm still seems intact but what about Northern and Central?

European Championships and World Cup round 2: 21-28 May, Czech Republic.