Please accept my apologies for this newsletter being a little late, I wanted to wait until after the JWOC trials before compiling it. The trials themselves seem to have gone off well and thanks are due to not only the planners and controllers but also to those, largely Wellington, club members who took care of the on the day organization. Thanks in particular are due to Alan Horn, Rob Collier and Paul Teesdale-Spittle. In this newsletter I have dedicated a large amount of space to the trials, including not only the results but also the maps. Outside the trials the entries for the associated SuperSeries races were a bit thin but those results, and an updated points table are also here. Other items include notice of change to the SuperSeries resulting from PAPO having to move the date of the Canterbury Champs, information on training camps, and an update on Queen’s Birthday.
Stop Press – JWOC team!!!

Trials do not always result in close racing with, often, one or two people standing out from the pack. The JWOC trials were a notable exception to this with some fantastically close racing and a very high standard exhibited across both the men and the women. With Tim Robertson (overseas), Ed Cory-Wright (injured) and Kayla Fairbairn (ill) all missing the selectors have a rather unenviable task of sorting out a team for Norway.

Riverside is actually a very old area first used in the early 1990’s and last used in 2008 for the Winter Classic. Although it is largely open, the contrast between the rocky steep hills in the south-west and the flatter river area, criss-crossed by gullies and riddled with depressions, makes it quite a tricky area. This is particularly true for a race such as a middle distance where even small errors can be costly.

This was emphasised by the 1 second victory that Tommy had over Nick. Winsplits makes interesting reading with Tommy having held the lead through control 3 after which Nick took over until the leg back up the hill to number 15. At control 18 both had the same running time and it was only the 1 s faster that Tommy took coming out of the pine forest to number 18 that made the difference! Devon started slowly and gradually moved up the field to move into 3rd place, which he never relinquished, at number 12. In the W20 race Danielle had a convincing margin of nearly 2 minutes over Alice, with another 2 and a half minutes back to Sophie in 3rd place. The almost story, however, belonged to Katie who, distracted by another runner, missed number 15 and had to back-track up the hill from 16 at the cost of nearly 5 minutes – the difference between 2nd and 7th. 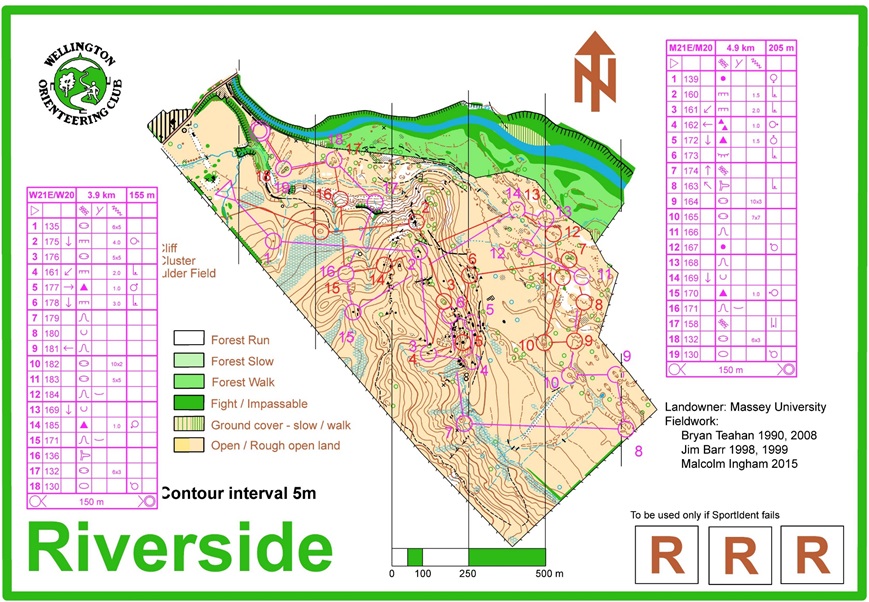 The sprint at Rathkeale produced another win for Tommy, this time a mere 3 s ahead of Cameron. It was Shamus, however, who made the crucial mistake on number 18 and saw a 6 s lead turned into a 16 s deficit, finishing in 3rd place. Like Tommy, Danielle had a second straight win with a relatively comfortable 13 s margin over Sonia, who recovered froma slightly disappointing middle in the morning. Alice backed up her 2nd place in the middle with another strong run for 3rd. 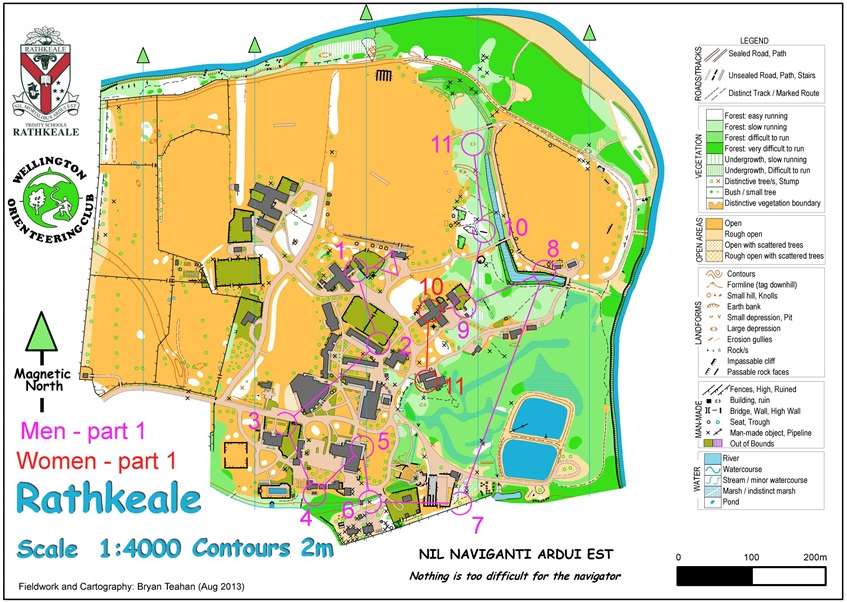 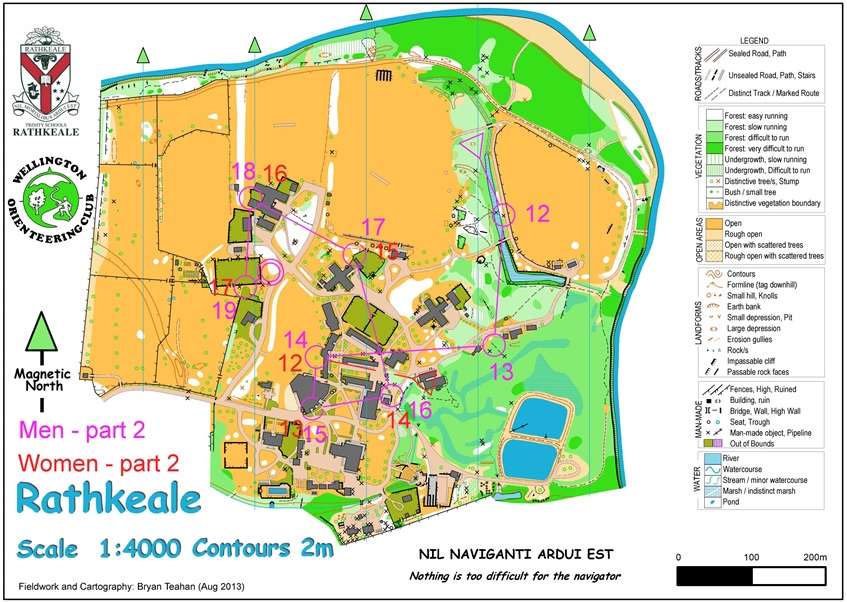 Hapua has been relatively well used in recent years, most recently for the team trials for the World Cup in 2013. However, nearly all of those uses have seen the start and finish based on the airstrip. As a result the decision was made to give the area a relatively new look by having a very different start and finish. The long legs were aimed to provide significant route choice and add to the physical challenge while the more plateau like area around the lakes gave a series of short more technical legs. The men’s course could certainly have been longer, but had the temperature been in the 30’s, as it was in the weeks leading up, or had it been very wet as Cyclone Pam promised, times would have been significantly longer anyway – sometimes it’s impossible to get it right!

This time Nick was the one with the narrow victory by 2 s over Cameron. Nick took the lead for the first time at the end of the short leg to control 16 where a large number of people seem to have made mistakes. Behind at this point by 22 s, Cameron pulled in all but 2 over the run to the finish. Shamus, one of those who dropped time at 16, finishing 3rd. Impressively only 82 s covered the first 4 finishers. In the women’s race the first 3 were well clear of the rest of the field, with Alice finally came out on top. Nevertheless she, Sonia and Danielle all lost varying amounts of time towards the end of the course. 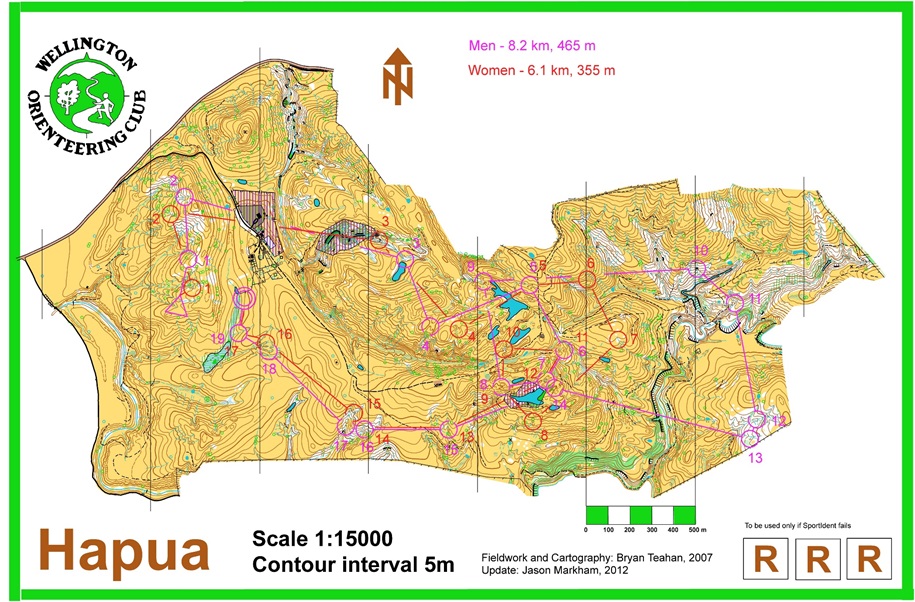 The JWOC trails weekend was also the second round of the SuperSeries. With the M/W21E courses being the same as the M/W20 courses all the JWOC trialists qualified for points in both the Junior and Senior competitions. In all three races the top juniors ran the seniors very, very close. On Riverside Gene Beveridge headed Tommy by 24 s, while Renee was 9s ahead of Danielle. In the sprint both Tommy and Cameron headed all the seniors, although in the women Laura Robertson showed the field a very clean pair of heels being over 2 minutes faster than Danielle. Renee and Jula McMillan were also faster than all the juniors. On Hapua Renee and Laura again cleaned out the field with between 4 and 5 minutes on the top juniors. Top senior man was Duncan Morrison although Gene, who has written an excellent report, describes running off the map and losing nearly 5 minutes at control 16.

The junior results are of course reflected in the JWOC trials. The overall top 6 in each of the senior competition were as follows. Full results are on Winsplits.

As a result of these 3 races Tommy now leads both the senior and Junior SuperSeries. In the Seniors, with 351 points, he holds a 27 point lead over Gene who has moved up into second, while in M20 he has a lead of 110 over Shamus. In the women, despite being twice headed by Renee, Laura retains first place with 520 points, but Renee is only 10 points behind. In W20 Danielle now has a massive lead over Katie, although both Allice and Kayla, each having only run 3 of the 6 races are threatening. Again the top 6 in each are as below, with full tables to be found on the ONZ website.

SuperSeries Round 4 Changed to the Otago Champs

As you may have seen, PAPO have been forced to delay the Canterbury Champs until later in the year. These were to have formed Round 4 of the SuperSeries. Rather than reduce the number of events it has been decided that Round 4 will now take place at the Otago Champs to be held over Anzac Weekend. This also retains a second round in the South Island. The relevant events will be the Otago Champs Long and Middle distance races, both being held on the Seacliff map, on 26 and 27 April. There is also a sprint race on Saturday 25 April. For full information on the Otago Champs see http://2015otagochamps.dunedinorienteering.org/.

Mixed news on the training camp front. I am still hopeful of a sprint camp in Hawkes bay over Anzac Weekend – most likely attractive for the North Islanders not going to the Otago Champs – but I am still awaiting information on this.

Although there is no camp post-Nationals I am trying to arrange a venue over Easter weekend for Jean Cory-Wright and Yvette Baker to talk about Scotland and Norway with reference to WOC and JWOC later in the year. Jean and Yvette of course both represented Britain at many WOCs and have extensive European orienteering experience to pass on. It was in Scotland of course that Yvette became the first Briton to win a world title (in the middle distance)

Although the timing may not be ideal for many, there will be a training camp in Woodhill Forest in the week leading up to the Queens Birthday 3-day in association with the Australian team coming for QB. More details later.

Lack of funding (unless there is a fairy godmother out there) means that the proposed away Pinestars-Bushrangers Test Match in Canberra over the weekend of 23/24 May will not go ahead. However, the match at Queen’s Birthday has the go ahead. Unfortunately the complication of the Schools trials been at QB means that, at least at this stage, the Test Match will be run at Senior and Under-23 Levels, but not Junior. A selection call for these teams should go out shortly.

Congratulations to the following who have been provisionally selected for JWOC!!