February usually brings about a pick-up of activity. This year, with no Waitangi sprints, SOW being at the end of January, and no opportunity to build a camp around these events seems to be the exception. Nevertheless there are many out there training diligently with an eye on Easter and beyond, competing overseas, or flying the flag for orienteering in other disciplines.

As people will be aware, this year sees the last WOC at which both sprint and forest events will be contested. Next year in Norway there will be solely be forest races, the year after in Denmark will see the first purely sprint WOC. That will involve not just an individual sprint with qualifying and a sprint relay, but the introduction of a new format sprint race. This will have a standard qualifying sprint after which the top finishers will go into a series of knock-out rounds run over courses of 8 minutes or so. This format has been trialled for the last few years at the Mediterranean O Camp. This year this took place in Spain and, no doubt with an eye to 2020, Tim Robertson was not only there, but won the new format sprint race. 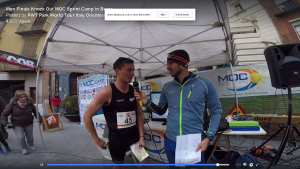 After the initial qualification race the top 36 men went into 6 mass start quarter-final fields of 6 runners each, over a course of 2.3 k with 16 controls. The top 3 finishers in each quarter-final progressed to the semi-finals (2 k, 9 controls), again with 3 races of 6 athletes each, the top 2 from each going into the final. The final itself was 2.1 k with 11 controls and all 3 races were run on the same day – testing not only speed and navigation, but recovery. Wonderful camera work by Emil Wingstedt has led to a fabulous clip (https://www.facebook.com/timrobertson95/posts/1922815537790769) – posted on Tim’s Facebook page, and from which the above still is taken – of the entire final race. As Tim suggests, it really is worth watching to get a real feel both for what racing at this level, in this kind of event, looks like, but also to experience the kind of terrain that is often encountered at sprint events in old European towns and cities – very different to our campus style sprints!

The final format of this race that will be used at WOC2020 is not yet decided although what was used in Spain does conform to the current proposal (http://orienteering.org/wp-content/uploads/2017/10/3rd_Sprint_Format_Description_v20171019.pdf). The main issue to be resolved are if, and how, forking could be introduced. The new format will be further tested at the final round of the 2018 World Cup in Czech Republic.

The change to a sprint WOC on even number years also means that New Zealand’s selection process will need to change. Clearly a sprint WOC team cannot be selected purely on the basis of a single sprint at the ONZ Championships. The plan therefore is that a sprint series over Waitangi weekend will become more prominent in this regard, and will probably need to evolve to also incorporate the new format. Year 2020 is not too far away and interested clubs might like to start thinking about this now.

The first round of the 2018 World Cup will be held in association with the European Orienteering Championships in Switzerland from 6-13 May. NZL will have only 2 representatives – Tim Robertson, who will run all 3 individual distances, and Laura Robertson in the sprint and middle distances.

February is usually the month in Europe when orienteers awake from hibernation and head to Spain and Portugal for both competition and training camps (e.g. the Mediterranean O Camp mentioned above). As well as Tim Robertson, Kate Morrison has also been in action. At the Portuguese International O Meet Kate finished a highly creditable 6th in a long distance event, 8 minutes behind world #13 Svetlana Mironova of Russia. Although in mispunched in the same race, he was more successful at the Mediterranean Open Championships held after the O camp, winning the night sprint, finishing 10th in the long distance, and 3rd in what was listed as a sprint but had times of only just under 30 minutes! 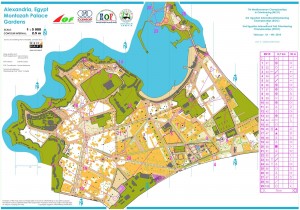 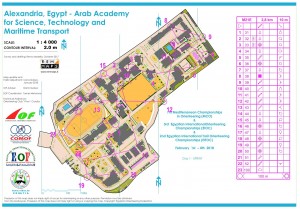 No NZL athletes were involved, but February also saw the second and third WRE held in Egypt. The first such WRE was a sprint early last year, but 2018 saw both a sprint and a middle distance, held in Alexandria. Photos from the Bulletin indicate the terrain at least for the middle distance in Montazah Palace Gardens – lots of palm trees and, as is borne out by the map, not too many contours. In contrast, the sprint at the Academy for Science, technology and maritime Transport looks very similar to the kind of sprint area frequently used in our part of the world. Fields were small with the overseas entrants largely drawn from Italy, France and Serbia, but expect more significant sprint events to be forthcoming as Egypt becomes more prominent in IOF.

As reported on the website several orienteers have starred recently in ultra-distance running events. Chris Forne was 5th in the single day version of the Coast to Coast finishing about 40 minutes behind the winner in a time of 11 hours 55 minutes and 26 seconds, but only 12 minutes away from 2nd place. Tim Farrant was a little further back in 48th place in 14:26:00, while in the two day version Rachel Baker was 33rd in 14:05:07.

Of course, at this very moment a number of orienteers including Chris and Emily Forne, Brent Edwards, Georgia Whitla, Martin Peat, Tom Reynolds, Tim Farrant, Tane Cambridge and others, are somewhere in the wilds of Fiordland battling Godzone 2018 (http://godzoneadventure.com/).

As previously announced Devon Beckman has been appointed to the positions of pre-JWOC and JWOC coach. With 25 nominations for selection (13 men, 12 women) there is serious training going on around the country in advance of the first trial at the ONZ Champs. Training programmes have been submitted and approved, and various mentors are working with individual athletes to try and ensure that JWOC2018 is a huge success.