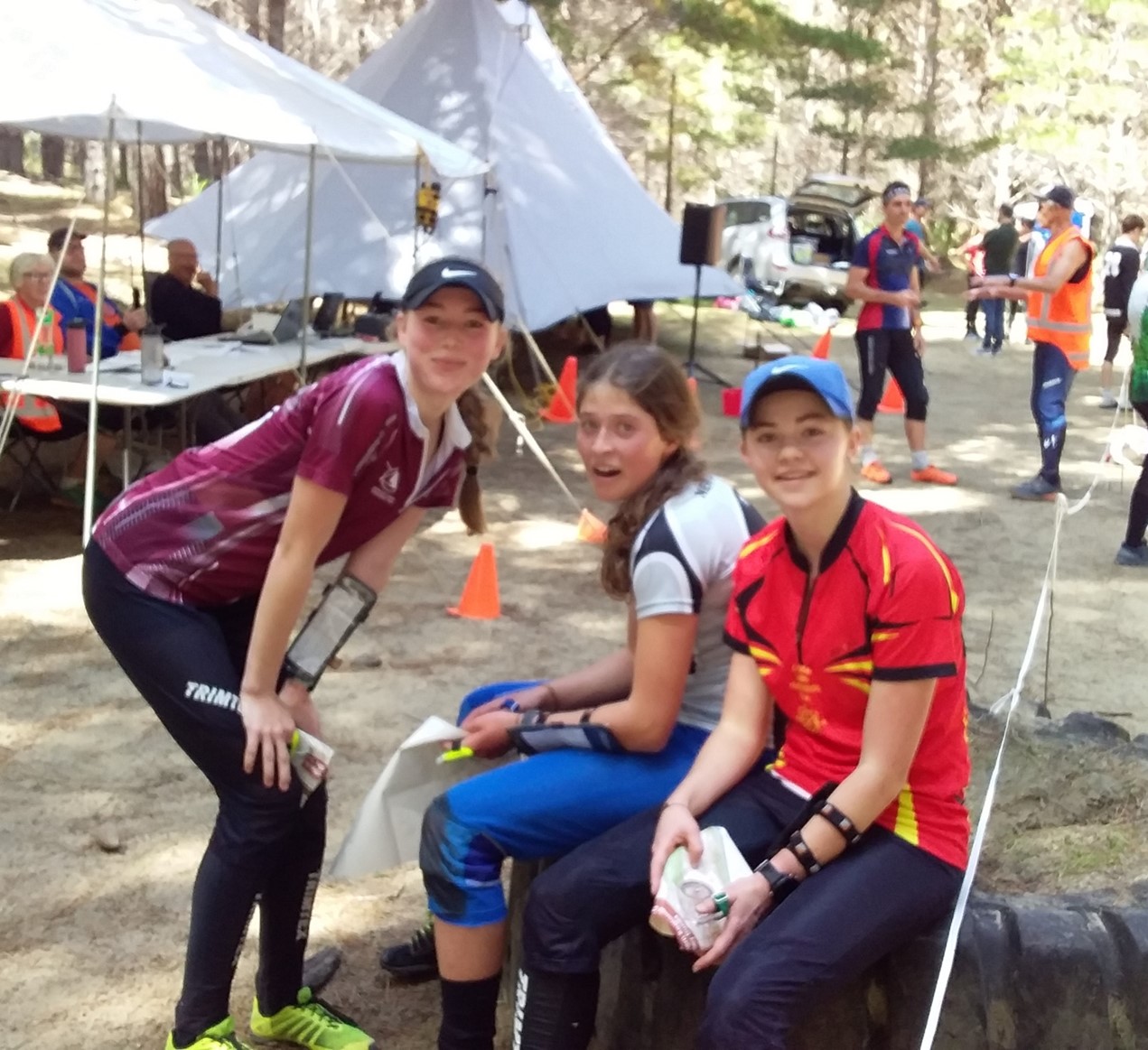 Although October has been relatively quiet on the competitive front, at least between the final round of the World Cup at the beginning of the month and Labour Weekend, it has seen quite a bit of behind-the-scenes activity. There was a long HP Zoom meeting involving 30-40 people at which Florian Schneider talked through his ideas for acting as an overseas coach as we plan for JWOC and WOC. Out of the same meeting there has grown a major expansion of the NOL, additions to the NSL programme for 2023, and some impressive developments in training plans.

The third and final round of the IOF World Cup took place in Switzerland over the first few days of October with New Zealand represented by Tim Robertson and Toby Scott. Although not quite at the same high altitude as WOC2023 is to be, the prospect of relevant racing and subsequent training in WOC-relevant terrain led to a very large field in both the men and the women.

Racing started with a relay, where Tim and Toby teamed up with Teodor Yodanov of Bulgaria to make an unofficial team, finishing 31st out of a total field of 48 men’s teams. The Swiss men and women were both victorious, the men finishing 32 seconds ahead of Norway with Sweden a further 20 seconds back in 3rd, while the Swiss women had over a minute on the second place Swedes and a full 3 minutes on third place Norway. Czechia (aka Czech Republic) demonstrated their growing strength with 4th place in both races.

From the point of view of the Kiwis the individual races were the focus. Tim, after his top performances in the first round of the World Cup (back in May), but having missed round 2 in Estonia, was still in line for a high overall finish if her could add a few more points to his tally.

This actually came in the middle distance where a 36th pacing, just under 5 minutes down on Kasper Harlem Fosser, earned him a valuable 5 World Cup points. Toby,2 and a half minutes further back was 63rd, in the top half of the large field. Daniel Hubmann was the only Swiss to make the top 3 in either of the middle distance races with 3rd in the men, the other medal places being filled by Swedes and Norwegians. Although not at high altitude the terrain was very typically Swiss in terms of the climb, with the middle courses featuring a lot of relatively short legs.

In the long distance both wins went to the home nation with Hubmann having a 31 second margin, in just over 96 minutes, on Max peter Bejmer of Sweden. Fosser was related to third, with the rest of the top 6 going to Scandinavia. Tim in 45th and Toby, repeating his 63rd, were between 15 and 20 minutes back, but still well up overall in the field. Swiss women filled 3 of the top 6 places as Simona Aebersold demonstrated again that she is the successor to the legendary Simone Niggli, and possibly Tove Alexanderssson, who was relegated to 5th place.

In terms of final World Cup placings, Tim’s 5 points in the middle was just sufficient to keep him in the top 10 with a total of 165 points. None of the other four Kiwis who competed in the 2022 World Cup gained any points. The overall titles went to Fosser and Alexandersson

The 2023 World Cup starts in Norway (26-30 April) with a long distance, a middle and a relay. Round 2 is in Czechia from 2-6 August and features a sprint, a sprint relay, a middle and a long, while the final 2023 round in Italy (3-7 October) doubles as the European Sprint Championships with individual, KO and sprint relay.

As was reported last month, Florian Schneider has agreed to work with ONZ HP to help in preparation for both JWOC2023 and WOC2023, and, more widely, in giving advice and help to New Zealand athletes. In a HP Zoom meeting on October 17th, Florian outlined the ways in which he believes he can help improve New Zealand performances at international level drawing on his own experiences in the Swiss elite system. For those who want it, and it is entirely voluntary to participate, group and individual advice will be offered regular discussions, as well as analysis of performances. Florian has already provided various resources for use in New Zealand and is keen to help any of our athletes when in Europe. For those interested, the recording of the Zoom meeting, which is about 100 minutes long, can be found at https://drive.google.com/file/d/1uE7SLCE34ULF-fuVDtrvQWEAQ79EuuZ-/view?fbclid=IwAR3NtuNgA6WVat7kQ-y6pKYbRVs54nDRRq5x91UP2hF0Qn0UOwKhABFCkuQ.

Earlier in the month Orienteering Australia announced that it was adding a “Sport Class” to its own National Orienteering League. This prompted considerable discussion, both in the Zoom meeting above, and subsequently as to how, and if, this could work in our own NOL. The basic idea in Australia was to introduce a new class which would allow more people to participate in the NOL. After several back and forths a modified version of this has been proposed, and indeed adopted, in New Zealand, and will allow 18A, 20A, 21A, 35A and 40A athletes to compete in the NOL as well as the present 20E and 21E. This will allow not only younger juniors but also “semi-retired(?)” ex-elites to measure themselves to some degree against the top.

*There will be only a single NOL table for men and a single table for women.

* Competitors in M/W21E will get points based on the winner getting 100 points and others getting 100*winner’s time/their time.

* Competitors in M/W20E will get points based on the winner getting 80 points and others getting 80*winner’s time/their time unless M/W20E are on the same courses as M/W21E when points will be calculated as for M/W21E.

* Competitors in M/W18A, 20A, 21A, 35A and 40A will get points based on the winner getting 60 points and others getting 60*winner’s time/their time. If any of these classes are on the same course points will be calculated based on the fastest course time.

* At the School’s Challenge at King’s Birthday competitors in the senior schools classes will also be awarded points.

* At the end of the NOL there will be winners in 21E, 20E and the “Sport class” based on position in the overall table.

* The total score will based on the best 4 scores from ONZ and KB combined plus the best 3 other scores.

Although it can never be exact, test calculations based on 2022 results suggest that the multipliers of 0.8 and 0.6 are about correct.

The above calculations have been applied to the first two rounds of the 2022-23 NOL on days 1 and 2 of Labour Weekend (see below) and tables for the men and women are now available on a new link (https://www.orienteering.org.nz/nol-nsl-sportclass-leaderboard/) on the ONZ front page.

Thanks to all who contributed to getting this introduced and especially Joseph Lynch for drawing the Australian move to everyone’s attention.

In the NSL 20E and 21E invariably run the same course, so the issue which is still being worked out is how to deal with the other classes.

As listed last month the list of events for the 2022-23 NOL is as follows:

Following a suggestion from Taupo OC the National Sprint League for 2022-23 has had two races added, in Taupo, over the weekend of the Katoa Po all-night relay. These two events will also include at least one non-NSL course for others. As a result the NSL now looks as follows:

Labour Weekend, featuring the Northern District Championships, returned to the site of the 207 World Masters and the 2021 ONZ Champs way up on South Head in Woodhill Forest. Many from the South Island absent following trips to Europe and Australia, yet it was still two southern based athletes who dominated the 21E classes. Both Matt Ogden and Lizzie Ingham were never challenged winning by clear margins on all three days. Zefa Fa’avae, running up as preparation for the re-scheduled JWOC forest races at the beginning of November, was a clear second to Matt on all three days with Duncan Morrison, Ronan Lee and Tommy Hayes taking it in turns to fill 3rd place. Renee Beveridge was a consistent 2nd or 3rd in W21E. The M20E class, in particular, was thin with only 6 or 7 runners on the first two days and only 4 on the final day. Nathan Borton, Michael McCormack and Seth dean all took turns at the top of the podium. The closest of the elite classes looked to be W20E until, after being behind Kaia Jorgensen on day 1, Molly McGowan put 10 minutes on her on day 2, before running away from the field completely in the day 3 chasing start. Kaia and Zara Stewart had a sprint finish for 2nd with Zara winning out.

The first two days of competition were the first two races in the 2022-23 NOL with points awarded, as explained above, in a wider range of classes. The top individual standings (full lists given on the ONZ web page) are as follows. Classes are listed in terms of what classes each athlete ran at Labour Weekend.

The teams competition between Northern Knights, Central Scorchers and Southerly Storm has been problematic for a number of years due to inconsistent numbers of team members at events. The widening of the NOL to other classes has gone some way to solving this issue and Scott Smith has produced a teams summary (also on the web) based on the top 6 points scorers in each race from each team in both men and women. Team designation is based on place of abode. After Labour Weekend the scores are:

An exciting training development is taking place in Auckland where, as Neil McGowan reports, Auckland O.C. has formed a partnership with Owairaka Athletics Club. This is aimed at allowing orienteers to not have access to athletics coaching and performance expertise, the ability to enter athletics events through the Owairaka club whilst “marketing” orienteering by wearing AOC singlets, and access to the Owairaka facilities. It also provides the opportunity to introduce Owairaka juniors to orienteering. This development is completely aligned with the goal espoused in “Upping the game” that there is a need for our top juniors (and seniors) to increase their speed to be truly competitive at international level. One of the first benefits of this arrangement will be seen at the U23 Camp in December when Owairaka have agreed to take charge of providing a 3000/5000 m time trial with pacers.

Finally, a reminder that the JWOC forest races, postponed in July due to fire risk, take place in Portugal this coming weekend. Kaia Jorgensen and Zefa Fa’avae have made the long trip for a second time and will line up in the middle distance on Friday (first start 10 pm in New Zealand), and in the long distance on Sunday (first start 11 pm New Zealand). Saturday is a relay where it is possible that there may be combined teams with the Australian contingent. As ever, live coverage on IOF Live at https://orienteering.sport/event/junior-world-championship/welcome/.