So the ONZ Championships, with new locations and a variety of challenging terrain, have come and gone. Congratulations to all the winners and place getters and to PAPO as the lead organizers. Out of the ONZ Championships we now await the final announcement of the WOC and JWOC teams and, below, is updated the points scores in the NOL. Overseas there has also been action with NZL athletes competing in various WRE events and, this last weekend, TioMila taking place in Sweden with a fabulous first leg run by Tim Robertson.

With Easter falling as late as it possibly can it seems to have been a long wait for the 2019 ONZ Championships but, as all who attended will testify, it was worth the wait. The mix of the public gardens in Oamaru for the sprint, the lovely open forest of Kuriheka for the long, the intricate gold mining of Maerewhenua for the middle, and the fast and rocky Earthquakes for the relay, provided a different challenge on every day. With the added spice of the individual races being trials for both WOC and JWOC in the elite and 20 classes respectively. 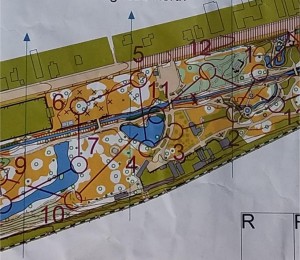 Part of M21E in the ONZ Sprint

Overall the big winners were Nick Hann and Lara Molloy who both achieved the middle/long double in the elite grades, but in the first-up sprint the elite titles went elsewhere – to Matt Ogden and Imogene Scott. Matt’s time of 13:42 was over 30 seconds faster than Nick Smith in second. However, Tommy Hayes would have run Matt close but for inadvertently missing out control 11 which, as shown below, was on a direct line between 10 and 12 in the complexity of the public gardens. Ed Cory-Wright took 3rd. Imogene was over 45 seconds clear of Alice Tilley in 2nd, who, like Nick Smith, was making a welcome return to top level competition.

In the race for JWOC places Penelope Salmon and Tessa Burns again showed their sprint ability repeating the 1-2 from the march JWOC trial. Marina Comeskey filled 3rd. In M20 Joseph Lynch was a clear winner ahead of Daniel Monckton with Kurtis Shuker, another who tends to excel at the shorter distance in 3rd. 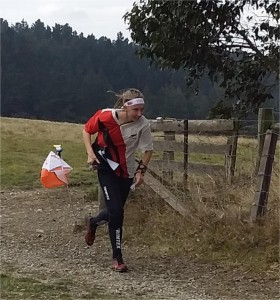 Briana Steven at the last control in the ONZ Long Distance 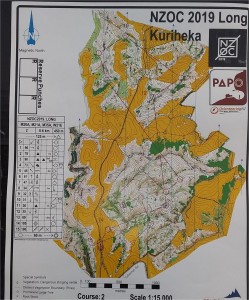 W21E and M20 from the ONZ Long Distance

Saturday’s long distance, despite winning times for the elites that were well over the recommended, accumulated accolades as the finishers poured in. The lengthy 9and not so lengthy) route choice options were a true long distance test, with the hills equally proving a significant test of stamina and fitness. Lara’s win in W21E, in her first year as an elite, was exceptional heading home the vastly more experienced Imogene by just under 5 minutes. Renee took her second 3rd place of the weekend a further 10+ minutes behind. It was a lot closer in M21E where Nick Hann and Gene Beveridge were separated by less than a minute in 110. Nick Smith followed up his 2nd in the sprint with another excellent run pipping Matt for 3rd.

In M20 Stephen Harding, with 2019 being his last chance to make the JWOC team, was a bit of a surprise winner holding out 2018 JWOC runners Joseph Lynch, Will Tidswell and Daniel Monckton in 2nd, 3rd and 4th. For a long time another returning face, Danielle Goodall, looked on course to take out W20. However, Marina Comeskey, the last starter was roared up the finish chute to take the title by a mere 5 seconds. Briana Steven, recovering from a disappointing sprint was 3rd.

For the middle distance Maerewhenua was a very small, but sufficiently densely detailed, area that even the elite grades were given a 1:7500 scale. The complexity was such that clean runs were as rare as hens teeth. Nick Hann appeared to be an exception with no notable errors in winning M21E. Lara, similarly completing the double, had a couple of 40-45 second time losses, minor in the context of the map, while even Katie Cory-Wright, despite a 4 minute winning margin in W20, suffered a nearly 2 minute time loss at the penultimate control. In M20 there was a real tussle with Winsplits showing that the lead changed hands at least 7 times as everyone made errors in the technical terrain. As shown below, Joseph Lynch, Connor Cleary, Scott Smith, Max Griffiths and Tom Harding all held the lead at some stage before Joseph pulled clear over the last 3 or 4 controls. 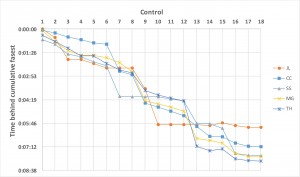 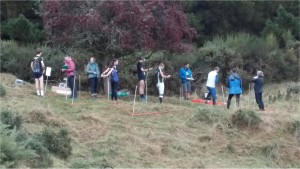 Waiting for the start at the ONZ Middle Distance

The relay on the final day saw a triumph for Nelson who have quietly being accumulating top athletes who have moved to jobs in the upper part of the South Island. It didn’t look to be their day however at the end of the first leg when Peninsula and Plains’ Joseph Lynch came in with a lead of over 2 minutes from Taranaki (Jason Bond) and Dunedin (Alistair Richardson). After her win in the middle, however, Katie Cory-Wright on leg 2 had somewhat of a disaster with 7 teams going past and Georgia Whitla seizing the lead for Nelson, passing Wellington’s Lara Molloy in the finish chute to give Matt Ogden a 1 second lead over Ruari Short. At this stage Briana Steven had brought another PAPO team through to 3rd. With the clear fastest time on the final leg Matt brought Nelson home with a comfortable lead of just under 3 minutes from wellington who were never really challenged for 2nd ahead of yet another PAPO team, this one with Nick Smith on the anchor leg.

Congratulations again to PAPO, aided by Dunedin and various others in putting on such a successful Championships.

After nearly a month of trials I was hoping to be able to include the full JWOC team. However, as it is still awaiting ONZ sign-off all I can do is offer congratulations to those whose selection for Denmark was announced at the ONZ Champs prizegiving. So a big hand for…

Hopefully the full announcement will not be far away – watch for it on the ONZ web site. Of course for these 6 and the others when named being selected is only the start of the hard work. The goal now is to be at peak physical and technical fitness come the beginning of July.

At the time of writing the team for WOC in Norway is also  still awaited.

Following the ONZ Championships 8 of the 11 races in the 2019 National Orienteering League have now been completed. With 8 individual scores to count it means that some athletes will still accumulate points whilst others can only slightly improve their tallies. As a result it is still a little difficult to see how things will ultimately work out, especially so in the Senior competitions where very few have competed in all 8 races.

In Senior Men, Gene Beveridge, the only athlete to have run all 8 races in this class, has a healthy lead over Nick Hann who has only 5 counting scores and is the only one who can actually catch Gene. Matt Ogden in 3rd has only 3 scores and cannot overtake Gene even should he win all 3 races at Queen’s Birthday.

In Senior Women, following her performances at the ONZ Champs, Lara Molloy has taken over the lead from Imogene Scott, although Imogene has only 6 scores counting compared to Lara’s 8. With 100 points for a win, any of the 5 can mathematically still win but would need some disasters to befall the two leaders.

With 7 1st or 2nd places and a 4th in his races Joseph Lynch is untouchable in Junior Men and the only race is for the minor placings. Will Tidswell has pole position for these with the variable results in M20 meaning that any of several others could challenge for 2nd. Daniel Monckton and Scott Smith, currently 8th and 6th respectively, but with only 5 counting scores, look good possibilities.

Things are much more open in Junior Women. Tessa Burns still holds the lead following good early season performances, but Katie Cory-Wright and Briana Steven have now closed the gap substantially and Kaia Joergensen, Marisol Hunter and Jessica Sewell all lurk not much further back. Marisol with only 6 counting scores (courtesy of 2 mis-punches in sprints!) may well be the biggest mover over Queen’s Birthday.

The next HP training camp will be in Woodhill Forest over the weekend of 18/19 May. Saturday will consist of training on Whites Line, while Sunday will incorporate the 90 minute Auckland Rogaine on Lake Kereta followed by further ttraining. Devon Beckman, as JWOC coach, will take charge although, of course, the weekend is open to all HP athletes. Those interested should email Devon asap.

Also of interest is advance notice of the 2019 Under 23 Camp. This will take place from 7-13 December and will be based in Counties Manakau. Applications will be called for later in the year.

Perhaps the most interesting news to come from IOF recently is that one of the proposed changes to the World Cup, due to take place from 2020, will not now go ahead. There had been a provisional agreement that from that year one round of the World Cup would always be at O-Ringen in Sweden, one organized by the Verein Swiss Cup, and one being the World Championships. The other of the four rounds would move from year to year. However, it has now been decided that the “practical, financial and organisational challenges” associated with O-Ringen being a World Cup round are too difficult and, as a result, O-Ringen will not be a fixed round of the World Cup. The make-up of the 2020 World Cup is now being re-evaluated.

While home-based athletes have been concentrating on the ONZ Championships there has been a fair bit of activity amongst the European-based contingent. The most recent of this was at TioMila, the first of the big Scandinavian relays of the year, last weekend. Pride of place goes to Tim Robertson, who ran the first leg for Koovee, coming in an amazing 4th place only 5 seconds down on the lead! Despite positions see-sawing throughout the night Koovee finally finished in 2nd place not quite 8 minutes down on IFK Göteborg. Also running at TioMila were Lizzie Ingham and Kate Morrison. Lizzie ran the anchor (5th) leg in the Halden SK 2 team that finished 23rd, while Kate was on leg 3 for OK Linne 2, who finished 123rd out of the big women’s field of over 300 teams.

Lizzie, Laura Robertson and Toby Scott were also in action the previous (Easter) weekend. Lizzie and Laura both ran at the JK in Southern England with Lizzie going 3rd, 4th, 3rd in the sprint, middle and long, the first 2 of which were World Ranking Events. Laura finished 10th in both the sprint and the middle, passing on the long distance. Meanwhile in France Toby ran WRE middle and long distance races in Alsace finishing 31st and 20th in these, respectively. Earlier in the month Tim and Kate ran in the WRE Swedish League races, both finishing relatively well down in large high quality fields. Lizzie, also in a large field, was a consistent 25th in the Norwegian Smaaleneneløpet long distance WRE, 10 minutes of 2nd place.

A reminder to get entries for Queen’s birthday in at https://entries.wellingtonorienteering.org.nz/. Saturday will be a multi-day distance in Waitarere Forest on the newly remapped north-eastern part which has not been used for about 10 years. Sunday will start with a morning sprint at Awatapu College and West End School. In the afternoon the elite and 20 grades, including the Pinestars-Bushrangers Test Match, and the Senior Schools teams will have a sprint relay on the campus of International Pacific University. Other classes will have a second individual sprint. The weekend will close on Monday with a middle distance on a re-mapped Kaikokopu.